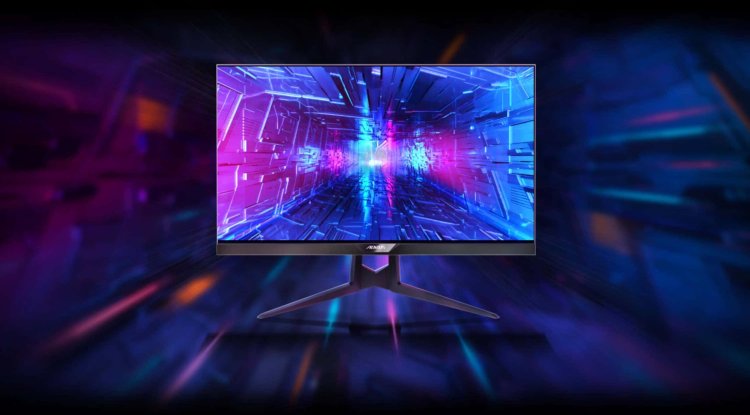 Monitors with a 27-inch diagonal and native resolution of 2,560x1,440 points continue to survive on the market, despite the drastic cheapening of "classic" 32-inch and ultra-wide 34-inch models. This is because they offer an excellent ratio of sharpness and hunger for hardware when playing. In addition, many users still find them ideal in terms of mere dimensions – such screens larger than 27 inches are not really interested in them. Some of the best gaming monitors, which we have had the opportunity to test in recent years, offered precisely a 27-inch diagonal and a resolution of the aforementioned 2,560x1,440 points, with a refresh rate of 144 or 165Hz. However, detailed testing of the built-in 10-bit IPS panel has shown that the FI27Q-X excels in many other fields, so it is actually an extremely versatile monitor, in which nothing is left to chance.

Let's start in order. In spite of the toy pedigree, the Aorus FI27Q-X reveals almost no temper – and for that, we are sincerely grateful. Its housing is made of gray plastic, with an extremely thin left, right, and upper edge and the gray ones are both a stand and a panel mount, only metal was used to make them. The entire monitor looks robust and expensive.

The mount allows you to adjust the screen in height (the distance of the lower edge from the desktop can be between 6.8 and 20 centimeters), rotation left and right (±20°), tilting in the range from -5 to 21° and pivoting. On the lower part of the support, there is a large hole, which can be used to conduct cables. Restraining the cable is also intended for the attached plastic buckle, which can be fixed to the protrusion under the video input. On the sides and back of the support, as well as on the back of the screen itself, there are details illuminated by RGB LEDs, the color and effects of which we can change using the RGB Fusion 2.0 application. We will not waste too many words on the effects themselves, because this whole aspect of the Aorus monitor is in principle useless. The aforementioned luminous details are not visible in the work, and LEDs do not have enough intensity to manage to illuminate the wall behind the monitor. It is an add-on that makes sense only to attract attention in what kind of LAN tournament, and in this sense serves the manufacturer himself more because it functions as a kind of advertisement than to the one sitting in front of the monitor.

From the connector, the Aorus FI27Q-X offers DisplayPort 1.4 input, two HDMI 2.0 ports, two USB 3.0 ports (located next to the video input), and 3.5mm headphone and microphone ports. If you decide to connect the microphone, the Aorus monitor will offer you the option of filtering external noise, which works surprisingly solidly, albeit with an expected increase in voice compression. The headphone output is also not of "any kind." Although it does not reveal what kind of electronics it uses to control sound output, the FI27Q-X supports impedance headphones up to 600 Ω, and therefore goes well beyond most other monitors in this aspect. The Aorus monitor also bears the HBR3 (High Bit Rate 3) label, making it clear that it can achieve 32.4 Gbit/s bandwidth through the DisplayPort interface, which it needs to display a resolution of 2,560x1,440 points, 240-hertz refresh, 8-bit colors, and HDR at the same time. Serious HDR, though, is not discussed. Although the monitor bears VESA's DisplayHDR 400 label, real HDR requires local dimming technology and the ability to reach at least twice as much brightness as the FI27Q-X is capable of displaying.

Aorus FI27Q-X is equipped with an IPS panel with a declared maximum brightness of 400 cd/m2, 142% coverage of sRGB color space, and a 10-bit display. The native panel actually displays 8 bits per color channel, and an additional two bits are obtained using the FRC (Frame Rate Control ) technique, where the fast, invisible eye, the flickering of two tones of a color acquires the third tone. It also boasts a response rate of just one millisecond, which is a remarkable result for the IPS panel, as well as support for AMD FreeSync Premium. FreeSync Premium from the "ordinary" FreeSync differs in that it implies the existence of Low Frame rate compensation (LFC) technology. In the event that the game is performed at a lower frame rate per second than the lower limit of the FreeSynca work range, LFC displays frames multiple times, in order to stay above the lower limit of FreeSync and maintain the complete fluidity of the action. Of course, the human eye does not perceive this multiplication of frames. Thanks to this approach, the lower limit of the required number of frames per second in this monitor become irrelevant and should not be thought about, although high frame rate is something that should still be strived for – because it results in a truly superior gaming experience, with perfectly smooth animations and superior sharpness of moving objects.

Moreover, when it comes to these aspects, the Aorus FI27Q-X offered us more than any other monitor that passed through our test lab. The fluidity of the action is absolutely impeccable, and the sharpness of the moving elements is such that there is absolutely no need to resort to technology that switches the backlight to stroboscopic mode–Aorus calls it the Aim Stabilizer in the OSD. An additional reason to avoid an aim stabilizer is that it reduces image brightness and prevents the use of adaptive synchronization.

Although it supports AMD's FreeSync in name, Aorus' Nvidia video card monitor is neatly recognized as G-Sync compatible, so their owners can also enjoy all the benefits of adaptive synchronization and play without twitching and "tearing" the screen.

A truly remarkable gaming experience is rounded off by impressively low input lag. Our camera, which we used to record the screen in 1,200 FPS, showed us an average input lag of only 7.92 milliseconds, with a minimum value of 4.17 ms and a recorded maximum of 10.83 ms. Translated, FI27Q-X is fast enough and "responsive" that it can be used without hesitation by esports professionals.

But this isn't just a monitor for the most hardened players. The Aorus FI27Q-X also proves to be quite impressive when it comes to the quality of the display itself. The colorimeter indicates that the coverage of sRGB color space well exceeds 100%, but also that 100% of Adobe RGB of color space and 95% of DCI-P3 space are covered. The gamma curve on factory settings (the "Gamma 3" option is selected in the OSD) perfectly tracks the reference curve and shows the desired value of 2.2. Brightness range ranges from 42.2 to 441 cd/m2, and the static contrast has a value of about 910:1, which is the expected result for the IPS panel. The color accuracy is amazing. We measured an average ΔE of 1.0, with a minimum ΔE of 0.49 and a maximum of 1.95. These are results that professional graphics monitors would not be ashamed of. The backlight on no part of the screen deviates more than 9% from the highest measured value for the selected brightness, which means that the human eye cannot perceive unevenness in its distribution. Color uniformity is the only aspect of screen display that could be better; in higher brightness, we recorded deviations of ΔE 5.4 on the right half of the screen. At lower brightness, the deviation falls below ΔE 3. These are not yet worrying values, nor values that will affect your enjoyment of displaying an Aorus monitor in any way, but if you are engaged in professional video editing or photo processing, they could discourage you from considering this model.

How do I get the best view that Aorus FI27Q-X has to offer without hardware calibration? Very simple – when you first turn it on, just reduce the brightness to 50 (Picture menu > Standard > Brightness). This will bring the actual brightness down to about 250 cd/m2, with factory 290 cd/m2. The temperature of the white color "from the box" is well adjusted and ranges about 6,600 K. Other options do not need to be touched, nor is it necessary to reach for some other factory profile of the image.

Aorus did a great job with this monitor. It has convincing construction, excellent display, phenomenal performance in games and offers over several useful additional functions, which are generally not seen in competing models. This is currently one of the best gaming monitors on the market, and also one of the best 27-inch models. All this greatness will cost you about $850 dollars, for which FI27Q-X is currently sold, so it is definitely not a device for everyone's pocket. However, who has that kind of money and can buy it – will not regret it.