Apple has presented the M1 Pro and M1 Max and wants to attack the established competition in the form of AMD, Intel, and Nvidia. Instead of just getting involved with the processors, they now also have potent graphics chips on offer. At least according to their own statement, because the M1 Max should be able to compete with the top hardware of the competition for mobile devices. 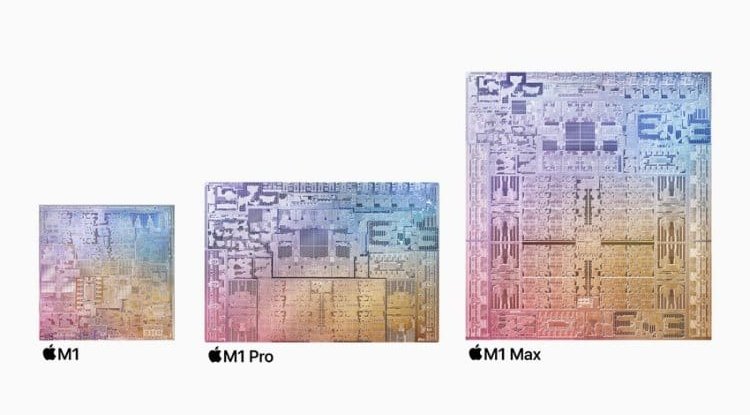 With the M1 Pro and M1 Max, Apple wants to advance further into the established field of the top dogs from AMD, Intel, and Nvidia and, in addition to more powerful processors on ARM architecture, now also offers significantly faster graphics chips - at least according to its own statement. At the moment there are only measured values ​​from Apple Marketing and you can see the M1 Max is, for example, 1.7x faster than an MSI GP66 Leopard 11 UG and has better efficiency.

For comparison: The M1 has 4 + 4 cores and 8 or 7 GPU cores. 32 GPU cores probably correspond to the current maximum configuration with 4,096 FP-32 shaders. The GPU is also home to the media engine, which accelerates various formats and is intended to keep Apple in the game with creative people. The processors are paired with 16 or 32 GiByte with the M1 Pro, where there is 200 GB / s bandwidth (256 bits), or 32 and 64 GiByte with the M1 Max, where there is 400 GiByte bandwidth (512 bits). The high efficiency is achieved here with a few firmly soldered LPDDR5 components and a system-level cache. The monolithic dies with 33.7 and 57.0 billion transistors are manufactured in 5 nm at TSMC.

At the end of the day, however, the raw data from Apple is just that. As usual, Apple will also have chosen scenarios for the marketing of the M1 Pro and M1 Max. The hardware is unlikely to do as well in 3D games as it does in Final Cut Pro. And the many cores require that the software is optimized for it. Only then will it be possible to uncover the promised 70 percent increase in performance. Above all, Apple users will appreciate the improvements to the I / O die, because Thunderbolt 4 with USB 4 is now supported at up to 40 Gbit / s. Above all, however, diversity has increased.

How fast the new chips really are, remains to be seen. At the moment only Apple's undocumented values ​​and a few synthetic benchmarks, such as those from Geekbench, are available. But the M1 Max is also clearly at the top. It is difficult to assess the graphics chip at the moment, but Apple definitely seems to have its sights set on the dedicated units from AMD and Nvidia.