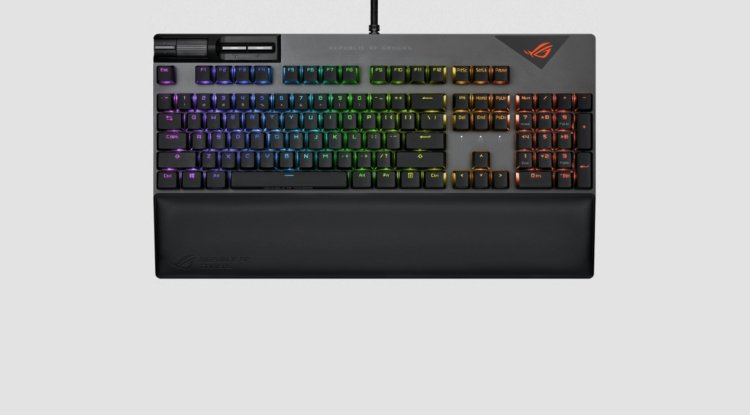 ROG Strix family - Flare II and Flare II Animate - difference is that the latter has a matrix LED “screen”, and the former does not. Both keyboards impose themselves on players because they bring mechanical switches, PBT Doubleshot switch covers, a fast connection with an 8,000 Hz polling stop and dedicated multimedia keys. Today we bring you a test of the “ordinary” Flare II keyboard model with ROG NX Red mechanical switches.

The keyboard comes in a cardboard box in ROG Strix colors, which contains all the important information about the product. Inside the box, the outer softcover, the keyboard is housed in a thicker cardboard box and a black protective bag. The cable is placed in a separate cardboard part, and under the keyboard, there is a palm rest in nylon. Below everything in the plastic bag is user instructions and ROG stickers.

Combined with the palm rest, the Flare II keyboard looks massive and powerful. But, as we saw in the video, the magnetic force holding the palm rest clinging to the keyboard is not high and any minor movement of the keyboard will mean the separation of the rest area. They would like the force to be stronger or to have little mechanical help to prevent easy separation. We are one of those users who change the position at the desk from time to time and thus move the keyboard - it is inconvenient to constantly repair the rest area. Besides, we have no other objections.

Flare II has an aluminum top cover in gunmetal color that makes it exclusive both in appearance and quality. The aluminum top covers a quality plastic case that houses all the components of the keyboard. Flare II measures 435 x 165 x 38 millimeters and weighs 1,113 grams. It is solid and of high quality, it is very robust and does not bend. By adding a palm rest, its depth increases to 270 millimeters.

The size of the keyboard is 100%, which means that it has a standard number of keys with the addition of a numeric part. This gives the customer the full width of the keyboard with standard large covers. On the top left are the multimedia controls, below which are the standard function keys and of course the rest in the standard QWERTY layout. The copy that came to us for testing is the US layout. The left Alt key is also used to invoke Macro commands that can be pre-programmed using the Armory Crate software. Each key can invoke a Macro command, so gamers are certainly satisfied here.

The Space button has the Republic of Gamers inscription on it, and it is special in that it has the so-called ROG Switch stabilizer that allows more precise button pressure and stability. Each ROG PBT Doubleshot (Polybutylene terephthalate) switch has a cap that provides pressure stability and longer life. Each cap is also a transparent marker for the passage of light from separately illuminated switches. The caps are ergonomically designed, nicely “catch” and hold your fingers, and are compatible with most keyboards. In addition to the keyboard, a cap removal tool comes standard in the retail package, which was missing from our review package for an unknown reason.

Above the numeric part is the ROG RGB logo in an illuminated triangle, and in the middle of the keyboard is the Republic of Gamers inscription so that there is no ambiguity as to whose product it is.

At the top of the keyboard are the already mentioned multimedia controls which are very intuitive. On the left side, there is a Previous / Skip Track switch that we move back and forth, and on its left side, there is an integrated Play / Pause button. To the right of this is a roller volume control with a Mute pressure function. This solution is excellent because it allows easy and fast control over the sound, and we especially like the roller and we have been used to it since the old Corsair models (K60, for example). Next to them are two stylized keys for locking Windows functions on the keyboard (for gaming) and the other with which we adjust the light level of the switch.

At the back, right in the middle, is a thick and high-quality twisted-pair connector that ensures both the keyboard’s communication with the computer and the pass-through function for the USB port to the right of it (seen from the back). The cable is long enough (about 2 meters), it also has a velcro strap for organization, and at the top it splits into two cables, two USB-A 2.0 ports.

At the bottom, we are greeted by a large ROG logo on the right cut into sloping channels that run across the floor. For stability, there are five rubber pads, with two more located on the underside of the feet that we can lift and change the tilt of the keyboard. At the top is a sticker with the product name, serial number and other important information. The keyboard, as we wrote, is massive and heavy, and it fits perfectly on all surfaces and is harder to move accidentally - at least when the connection with the palm rest would be stronger.

And that palm rest is great. It is a plastic base, with five rubber pads, on top of which is an imitation leather under which is a soft sponge. It is a real pleasure to rest your palms on it because it is very comfortable. Whether it will remain equally comfortable with summer days, or whether the palms will sweat a little more remains to be seen.

From this angle, the Play / Pause round button can be clearly seen, as well as the individual illumination of the switch. And these switches are mechanical, developed by Asus, and clearly inspired by Cherry MX switches. We’ve been introduced to their RX series optomechanical switches before, and lo and behold, now it’s the turn of the new NX.

The Flare II keyboard only comes with NX Red, which is linear and fast, and Asus also produces the NX Blue (tactile, with a clear sense of interruption) and the NX Brown, which are ultra-tactile. But you can only get these other switches in the stronger Animate model.

The NX Red switches located on this keyboard have a breakpoint (on, actuation) at 1.8 millimeters from the total stroke of 4 millimeters. This breaking point is insensitive because the stroke is linear. An initial force of 40gf (gram-force; 100gf = 0.98 N) is initially required to actuate the switch, and a total force of 55gf is required. Asus lists a lifespan of 70 million for all NX switches.

The feel of the work is not much different than with the Cherry MX Red switch because the stroke is linear and the switching is fast but still, the sound is much different. While the Cherry MX switches are a little louder and more metallic, these are much more muted thanks to the sound-absorbing foam. It is placed around all the switches under the aluminum cover and does its job very well. The sound of harder pressing is duller, and significantly muffled, so you have the feeling that you are not pressing mechanical switches - because of that muffling. But the speed of the break and the quality of the feedback is irresistibly mechanical and there is no doubt about that. On this keyboard, both gaming and long-term work (writing) is a real pleasure, and your ears will not be filled with metallic sound as with the MX switch. In addition, the family will be satisfied.

Software-wise, we can control this keyboard via either Aura Sync or Armor Crate. We used the latter which gives us more control. There are four menus related to control - Keys, Lighting, Performance and Firmware update. The first, Keys, offers the ability to change the function of each individual key on the keyboard and save the new function to onboard memory. Additionally, we can record Macro commands, which we do on the fly. The Lighting menu allows you to change the brightness as we will see in the video below, and the Performance part changes the polling rate, computer communication speed from 1,000 to 8,000 Hz. It’s not that you’ll feel it in practice, especially if you’re an average player, but it could mean something to professionals. The last menu includes searching and upgrading the firmware to the latest version.

Since the lighting is per-key, and each cover has a transparent label, the effects are nicely visible. In this slightly darker video, we see everything that is offered to us in Armory Crate software, from static lighting, through breathing, color change, reactive lighting, rainbow, ripples, starry sky, quicksand, electricity, to raindrops. The brightness can also be changed via the four-level key on the keyboard. Clearly, not everyone likes any lighting and such can turn it off.

Asus has offered its own mechanical keyboard solution with the Flare II keyboard, and very successfully. It has been known since before that they know how to make a robust high-end keyboard, and now we know that their in-house switches work great as well. These NX Red, linear, are great for fast action, but not bad for long-term writing either. It’s all just a matter of habit. Someone likes to have a sense of interruption, switching points, and for such, there are tactile NX Blue and Brown switches that come with the Flare II Animate keyboard.

Flare II is a robust, beautifully designed premium keyboard lifted by a gunmetal aluminum panel and very useful and ergonomically arranged multimedia keys. The software makes it very adaptable to the different needs of the players, and the lighting is icing on the cake for those who love it. If you want even more, and you are willing to pay for it, there is also an Animate model with a matrix LED “screen”. The only objections we have to go to the loose connection with the palm rest and the outdated USB 2.0 connection.