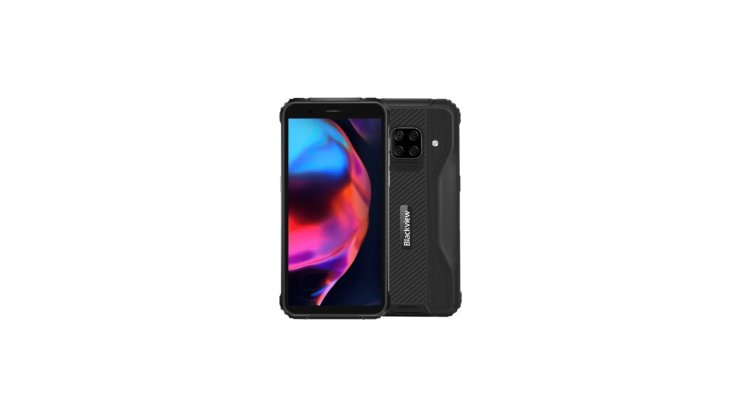 In appearance, it is practically identical to its brother, the BV5100 model. Of course, the main difference that makes the Blackview BV51000 Pro better is the high-quality Honeywell scanner that reads barcodes, QR codes and other formats, which we will discuss in more detail later. For now, we’ll just say the reader is on the top edge, and the keys that activate it are on the left and right edges of the smartphone, roughly in the middle. Speaking of the edges, the top and bottom are rubberized, the left and right have solid metal plates - on the right is a fingerprint reader, as well as buttons to increase and decrease the volume, and it also says “shockproof” which means that is resistant to shocks, drops, vibrations, pressure and extreme temperatures, all in accordance with the MIL-STD-810G military standard. Of course, the device is waterproof and dustproof in accordance with IP68 and IP69K standards.

On the left side, there is a button for turning on the device (on / off), as well as a slot in which you can place 2x nanoSIM or 1x nanoSIM and 1x microSD card. It can be seen that the groove is insulated so that water cannot enter it. At the bottom is a USB Type-C port for fast battery charging, but you can also charge it wirelessly, and left and right are the microphone and speaker.

The front is dominated by a screen around which is a frame that is slightly raised above the screen, which means that if you place it with the screen facing down it will not touch that same flat surface. Above the screen is the front camera, headset, LED notification, and distance and lighting sensors.

The back of the case is rubberized and with a special texture, and what I immediately notice is that it doesn’t slip in your hand which is good. In the upper part, there is a frame with cameras, and to the right of the cameras, there is an LED flash. In the middle is the company logo. When we talk about the dimensions, they are 159.4 x 77.7 x 13.7 millimeters, so it is a bit thicker, which is logical because of the robust housing, so its weight is much higher, it is as much as 275 grams.

The backrest is not in the foreground with this smartphone, at least in terms of resolution, but in terms of quality, it is in line with the characteristics of the smartphone. The screen has a diagonal of 5.7 inches with IPS matrix and HD + resolution of 720 x 1440 pixels (282 ppi), the ratio is 18: 9, and occupies 67.92% of the front surface of the smartphone. It is also sensitive to simultaneous touch in 5 points (multi-touch) and is additionally covered with Corning Gorilla Glass 3 protective glass so that it is resistant to scratches.

In the display settings, you will find the option to activate Dark mode, night light, set LED notifications and automatically turn on the screen when you lift the device (Head up). The display of the content itself is very clear and clean, the icons and letters are sharp, the colors are dynamic enough. It responds well to touch so you can “leaf” it and with a simple touch of your fingernail, it does not attract fingerprints so you can clean it very easily.

We measured the brightness of the screen with our measuring instrument and got a result of 534 Lux, which means that you will see the content on the screen great even on a sunny day.

The processor has 8 cores, and 2-core graphics, here is their layout:

Users have 4GB of LPDDR4X RAM (dual-channel at 1600 MHz), as well as 128GB of internal memory (eMMC5.1) which is expandable via a microSD port for another 128GB. In terms of hardware, this smartphone should work quickly and fluidly, which we will check in the section on video games and operating system.

This is a smartphone that you can comfortably use in all conditions, including photography. The app itself is very good so you can take full advantage of the camera’s capabilities.

The front camera is very good. It is a Sony IMX214 16MP sensor and f / 2.2 aperture so it will take very good photos. Even in low light conditions the photos are pretty good. The camera supports face recognition, face beautification, HDR, and night mode shooting, portraits and black and white photos, and has a 2x zoom screen. Face Unlock is also supported. It is very good in video so it can record FHD video 1920 x 1080 pixels at 30 frames per second (1080p @ 30fps) in MP4 format (also supports electronic image stabilization - EIS).

The rear camera is triple, and these are the following cameras:

All in all, the cameras are very good, you will be able to use them for both business and private purposes.

The sound is very good, a bit louder than I expected from a robust smartphone, but not much louder. The quality is very good, there are also deep tones so it is pleasant to listen to, and we have tried this on several music files, and in movies and video games, I am pleased with what we heard. I’ll just remind you that you also have headphones in the box.

In this part the BV5100 Pro is very strong. It is a 4G LTE smartphone that supports VoLTE on both cards. The quality of the conversation itself is very good, it even seems to me that the volume is a bit higher. It also supports some additional things that you will not find on a large number of mobile devices.

As for the possibility of connecting, here are the details:

Probably the strongest feature of this smartphone is its battery which is simply put - great! It is a lithium-polymer battery with a capacity of 5580mAh that cannot be removed (non-removable), and it supports fast charging (9V / 2A), and it is convenient that it supports wireless charging.