Innosilicon has further detailed its efforts as a graphics card provider. Based on Fantasy One GPU, several graphics cards and executable material were shown 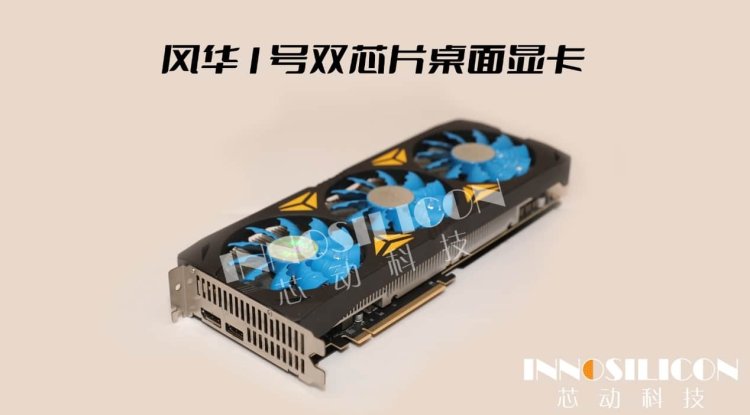 Innosilicon had already made it into one or the other report in media because in the fairly homogeneous dedicated graphics card market, which at the moment essentially consists of AMD and Nvidia chips, this one is the colorful bird. The Fantasy One GPU now presented is primarily intended to be an alternative to established providers in China. Innosilicon is not reinventing the wheel either but relies on BXT technology from Imagination.

At the market launch, the company will present four products, but the hard facts are still missing at the moment. It is known that the A 5 card (dual-fan design) offers 5 teraflops of computing power for single-precision operations and a fill rate of 160 GPixel / s. The GPU can access 16 GiByte GDDR6 (X) on a 128-bit wide memory interface, which should run at 19 GB / s and can move up to 304 GB / s. In some respects, the technology is very modern - including the connectivity that Displayport 1.4 and HDMI 2.1 provide. They are plugged in via the standard PCI Express 4.0 with 16 lanes.

With type B (triple fan design), the GPU is installed twice and connected via the Innolink interface. With 10 teraflops of computing power and 320 GPixel / s filling rate, the double values ​​are called, but the experienced user knows that you don't automatically get double the performance on the road. The 32 GiByte GDDR6 (x) are lush even by modern standards and, viewed as a whole, perhaps a bit exaggerated, but in the end, the rule applies: When in doubt, you can never have enough memory.

While Imagination primarily names OpenGL and Vulkan as interfaces, Innosilicon also seems to have a DirectX driver. In which expansion stage it is, is unclear, but that comes as a bit of a surprise, as you could not rely on the preparatory work of a partner here. Among other things, benchmarks were shown at the introductory event, but no scores.

The Fantasy One is also only the first step on the way to the already promised Fantasy Two and Three, which will then be produced in 5 nm. All in all, this is likely to be another project with which China wants to make itself more independent from Western suppliers, even though the technology here has been bought in. With the CPU development by Loongson and Zhaoxin you couldn't do without help - it came from VIA, where you got an x86 license from the Cyrix takeover. The Centaur division with x86 technology from VIA now wants to take over Intel and spend 125 million US dollars on it.