Fenghua No.1: What's behind the new graphics card?

The Chinese company Innosilicon has announced the Fenghua No.1, a graphics card that has promising key data. This is aimed primarily at professional customers. 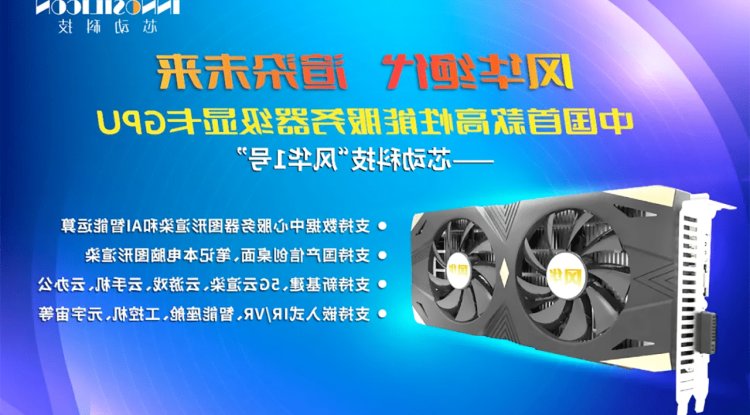 There are always reports about products from China with which companies there want to offer an alternative to standard processors or graphics cards from AMD, Intel, and Nvidia. The same is also the case with the "Fenghua No.1" graphics card announced by Innosilicon. This is apparently aimed primarily at professional customers.

According to the company's international website, Innosilicon actually specializes in developing IP blocks that other companies can acquire and then use in their own products. On the Chinese website of Innosilicon, there is now a press release announcing the said Fenghua No.1 graphics card.

The technical data published so far look promising. The GPU is supposed to use PCI-Express 4.0 and modern GDDR6X memory, among other things. In addition, there is talk of built-in HDMI 2.1 and Displayport 1.4 connections, which means that the graphics card is more likely to be intended for the workstation than the server area. Innosilicon is promoting Fenghua No.1 with support for all common graphics APIs as well as for VR. In theory, it should also be suitable for games.

The most exciting information is unfortunately not included in the press release. So far, the manufacturer has not given any information on the planned release or the GPU used, or its performance. But it is very doubtful that Fenghua No.1 will be a significant competitor to AMD or Nvidia. Instead, the graphics card will probably be sold as a slower alternative, mainly to business customers in China. In addition, the focus could also be on cryptocurrencies, because Innosilicon currently offers not only IP blocking but also some miners for Bitcoin and Ethereum.

As far as GPU technology is concerned, there is at least some evidence that Imagination (Power VR) has a hand in it.