Meshify 2S is not a completely fresh case, but a successful case model that is combined with a very well-accepted design of the “Meshify” line. 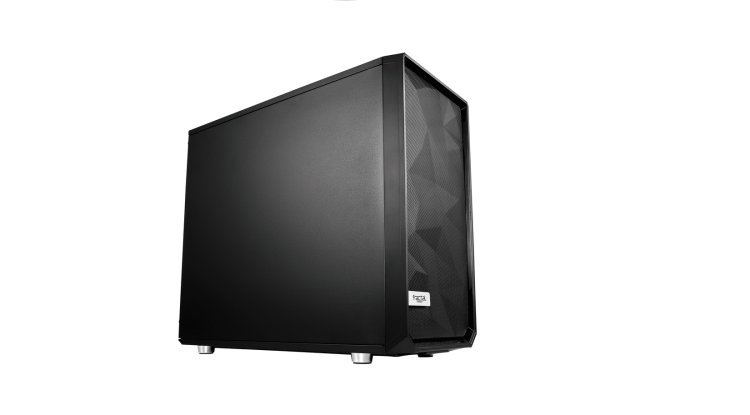 Fractal Design housings are known for their attractive minimalist design, but lately, they have also turned to performance.

The Meshify line of cases has been on the market for some time and has become very popular. Its primary advantage is the front of the case, which comprises a mesh front cover and gives the case excellent thermal performance. The first such case was called “C”, and it was a tiny mid-tower case, ideal for the average everyday PC build. Thanks to the success of the first version, Fractal is releasing its big brother in the form of the Meshify 2S version.

Meshify 2S is not a completely fresh case, but a successful case model that is combined with a very well-accepted design of the “Meshify” line. Namely, it is a Define S2 TG case with which the front cover has simply been replaced. For a long time, Fractal Design designed the front side as one completely flat panel, and although the air-intake space was set aside, it is not large enough to ensure optimal performance for such housing.There is also a real dust filter under the mask, and the front side can be cleaned without removing it.

However, Meshify 2S solves this problem. The front grille now has a mesh metal surface that is very uniquely designed, bent at different angles, and thus captures the light of the environment in an interesting way. Of course, there is a real dust filter under the mask, and the front side can be cleaned without removing it, although it can also be removed when cleaning. The filters on the bottom and roof of the housing can be easily removed and cleaned. The front I/O, as well as the buttons, are located on the front cover, so when removing, be careful not to pull the cover off and damage the wires.

The roof of the case is also adapted to the new design and you get a hard mesh surface that also contains a dust filter. In order to take it off, you have a button on the back which presses the cover to release, and one side pops out and it is still easy to lift and clean it or install fans or a radiator. To return the cover, you need to press the side with the clasps a little harder.

After this total story, you’ve probably already noticed how much fan space this case contains. So the front supports three 120 or 140 fans, which is also true for the roof of the case. At the rear, of course, there is room for one fan, also measuring 120mm or 140 mm. However, that is not all. Namely, the bottom of the case, on the front part, can support two more 120 or 140 fans, which makes 9 fans.

Most of the cover between the lower and upper parts is perforated, while the front part can be removed as needed. You can mount radiators of 420 mm and less on the roof, max 280 mm or 360 mm at the front, and a radiator up to 280 mm at the bottom.

Speaking of which, it should be noted that we are not necessarily talking about AiO coolers, but this housing is deliberately designed to be a little longer to fit completely custom water cooling with pre-made holders for tanks, pumps and other details. If you don’t plan to install custom water cooling, the case will most likely look a little empty. Farther away from the front view is space for three 3.5 ”drives, including vibration absorption, and two 2.5” drives behind the motherboard.

The front I/O, besides the standard USB-A slots of two pieces, also has one USB-C slot of 3.1 Gen 2 standard and speeds up to 10 Gb / s, so with this case you ensure the future-proofing of your system, of course, if also buy hardware that can take advantage of these features.