The body of Lenovo Thinkpad X1 Yoga Gen 5 is metal, unlike the carbon that goes on the classic laptop versions. Touchscreen model with 2-in-1 design. 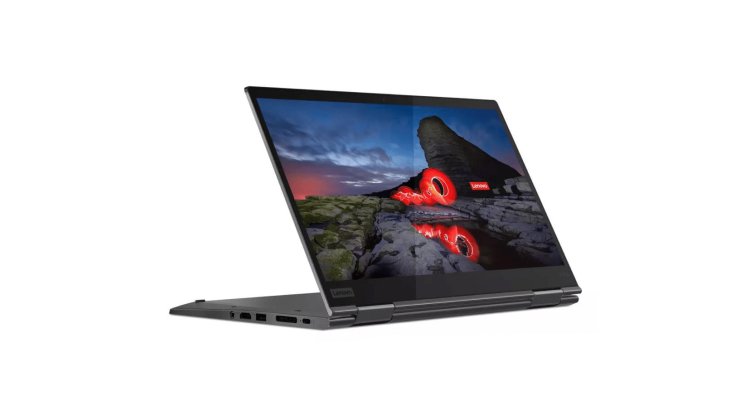 A step to perfection

Sometimes we really wonder how the competition just doesn’t copy the perfect solution of some part of the product. At Apple, it’s a haptic feedback engine. With a ThinkPad laptop, it’s definitely the keyboard. Therefore, after writing reviews all day, it’s just hard to leave such a good keyboard, especially as someone who taps with three fingers of each hand.

The clicks are comfortably muted, so you won’t bother your colleagues, and the comfortably rounded keys just sit perfectly under your fingers. The keyboard has a white backlight that pulls neither purple nor blue but is not uniform in all characters, which is a bit annoying considering the price of the device.

In the middle of the keyboard is a red button to control the cursor on the screen, as well as buttons to click above the trackpad itself. The trackpad takes up free space under the classic buttons but becomes small for today’s standard.

Of course, it supports all Microsoft quick actions, such as scrolling. In addition to the two buttons at the top, the trackpad has its own buttons in the lower corners for faster operation.

The body of Lenovo Thinkpad X1 Yoga Gen 5 is metal, unlike the carbon that goes on the classic laptop versions. We think, however, that the combination of aluminum and magnesium is a little better because we noticed that in the carbon version, the fan has to work a little harder to maintain the system temperature. The right edge has a fan output and a USB 3.2 type A slot, a laptop power button and, finally, a Stylus that you can pull out of its location.

Stylus, of course, also means that it is a touchscreen model, which is logical considering the 2-in-1 design. The left edge of the laptop, on the other hand, has two USB-C Thunderbolt slots, one USB 3.2 Type A slot, HDMI output and an audio headphone and microphone connector. One Thunderbolt USB-C slot here is part of a dock system on a laptop that can expand its capabilities, including encrypting the system to protect against theft. The speakers are located on the bottom of the laptop and will reject the sound when the laptop is on the table, and play towards you once you turn the laptop to tablet mode.

The hinges of the laptop that hold the monitor can hold it at all angles, but this strength prevents the laptop from being opened with one hand, but should be held at the bottom with the other. Once folded, it will ask you to switch to tablet mode or stay in standard mode. Of course, finger gestures on the screen work precisely, but if you want to leave the screen clean, we recommend using a stylus. Real productivity is unlocked once you learn to use the touchscreen and keyboard simultaneously.

FullHD, Intel i7 and Thunderbolt

For specs, the FullHD screen leaves you with significant edges around the screen itself. This is also one part of the laptop that is crying out for an update, especially now that the competition has started to actively put 16:10 screen ratios, thus using a good part of the “forehead and chin” that remain empty here. Internally, the laptop is armed with an Intel i7-10510 processor, which comes standard with four cores and eight threads, and will run all business applications with no problems without too much trouble.

Intel’s vPro graphics system has also been integrated, which, frankly, won’t run impressive 3D graphics, but it does everything else, including connecting multiple 4K monitors via the Thunderbolt interface. There is also 16 GB RAM and 512 GB of very fast SSD, so you won’t have to wait for the program to start or install, but the laptop “eats” all the tasks.