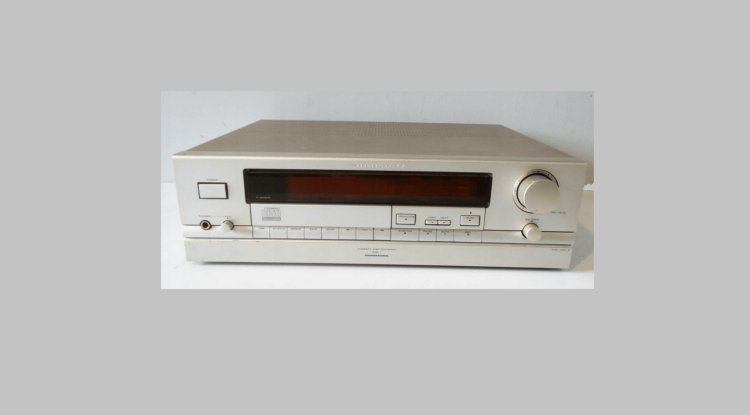 According to Marantz officials, the sample CDR-1 evaluated was a prototype that may be improved. Nonetheless, the maker was secure enough to lend this equipment. That confidence was warranted, even though error notices came on the screen from time to time, necessitating the repetition of several tests.

There are various sections on a blank CD-R disc. A mechanical clamping region for the disc is located next to the center hole. The Program Memory Area (PMA), where track numbers are recorded with respective start and stop positions, and the Program Calibration Area (PCA), which is used to calibrate the laser energy needed for recording on the disc via a trial recording, are both located towards the middle of the disc. The PMA stores track numbers with corresponding absolute start and stop times for a partially recorded CD-R disc.

Once a disc has been fully recorded (up to 18, 63, or 74 minutes, depending on the blank configuration), a definitive table of contents (TOC) can be "written" into the disc's lead-in section, after which further recording is impossible, even if the available time has not been used up. It is possible to "label" portions of a program area as invalid, such as poor recordings so that they are skipped over when the disc is played.

The recordable CD-R disc's substrate is the same clear plastic used in CDs. To keep the recorded data, a spiral track is created into this substrate; the pitch of the spiral determines whether the disc can hold 63 or 74 minutes of the signal. (The 18-minute time limit applies to 3-inch CDR discs.) The substrate is coated with a blue-tinted translucent recording layer, but because it is then coated with a gold reflective layer, the recordable surface appears green. On top of the gold coating, a protective layer of plastic material is put.

Pits are burned into the recording layer of a CD-R disc to store digital data. The laser beam's intensity induces localized heating of the substrate material and the recording layer to 482° F (250° C). The substance of the recording layer melts, reducing its volume. The constant switching between "writing" and "reading" power results in the formation of a bit pattern resembling that of a standard CD.

Those who have been following CD and DAT advances will be familiar with the input/record electronics (including ND conversion, etc.), as well as the playback electronics (including D/A conversion similar to that found in typical CD players). The CD-R mechanism, on the other hand, is novel. It has a more powerful laser than normal CD players and must be capable of very precise tracking, especially during recording. This necessitates not only a high-precision transport but also electronics capable of decoding data from the prepared track and controlling the rotational speed of the disc.

The "Power" jack and its accompanying "Level" control are located on the front panel's left side. The majority of the upper section of the panel is taken up by a huge display. When applicable, track numbers, the typical selectable time displays, programming information, kind of repeat play and shuffle-play selection are all displayed here. Furthermore, the display indicates the recording level, kind of disc inserted, disc status, and the existence of faults (for example, programming nonexistent tracks or attempting to record on a conventional CD). The disc tray is located beneath the left portion of the display, with an "Open/Close" button, "Prey" and "Next" track selection buttons, and the "Play" button to its right.

A large row of controls handles "Time" display, "Shuffle" play, "Repeat" modes, "Scan" (playback of the beginning of each track), normal and "Fast" search, "Stop," "Pause," "Mute," and recording. To begin recording, press the record button and then "Play," which is conveniently located just above. The controls for record level and "Balance" are on the far right.

A row of smaller buttons is hidden behind a hinged flap at the panel's lower edge. These are supplementary controls for programming, direct track selection, track-skip mode setup and unsetting, analog or digital input selection, manual or automatic track numbering, and synchronized recording. There's also a "Fix-Up" button here, which applies the final table of contents on the disc and is protected by high rims on each side to prevent accidental pressing. The disc can only be played on a CD recorder until the TOC is repaired, but more tracks can still be recorded. The disc cannot be recorded further after the TOC is in place, although it may be played on standard CD players.

It takes around 3 minutes to fix the TOC, and it starts automatically when you press the "Fix-Up" and record buttons. As this occurs, the display counts down the time so you know how long you have to wait and when the TOC is completed. The CDR-1's rear panel houses the power cord input, analog input and output jacks (both unbalanced and balanced XLR types), coaxial and optical digital input and output jacks, a pair of quarter-inch microphone input jacks, an input selector switch (balanced, unbalanced, or microphone), and a pair of "RC 5 Remote" jacks.

These last are to use this control-link system to connect the recorder to other Marantz or Philips components, for multi-component operation with a single remote, or for synchronized recording from a CD player with an RC 5 connection.

Marantz refers to this component as a professional CD recorder. Of course, the price implies that it is designed for professional usage, and it is only available in restricted quantities. Furthermore, because the CDR-1 lacks the Serial Copy Management System (SCMS), small studios or other professionals who need to produce a modest number of copies of digital program sources are not limited to single-generation copies.

Furthermore, with analog tape recording equipment and professional DAT recorders, these studios will be able to undertake dub, overdubbing, and the like. Studios will also be able to provide sample CD-R discs to their recording artists prior to the production of traditional CDs. In short, there is a clear need for such a recorder in professional applications. The Marantz CDR-1 is more affordable for the budget-conscious professional because it costs just over one-third the price of the least priced CD recorder.