We took a closer look at the mix of military simulation, shooter, and role-playing game developed by Flying Squirrel Entertainment. 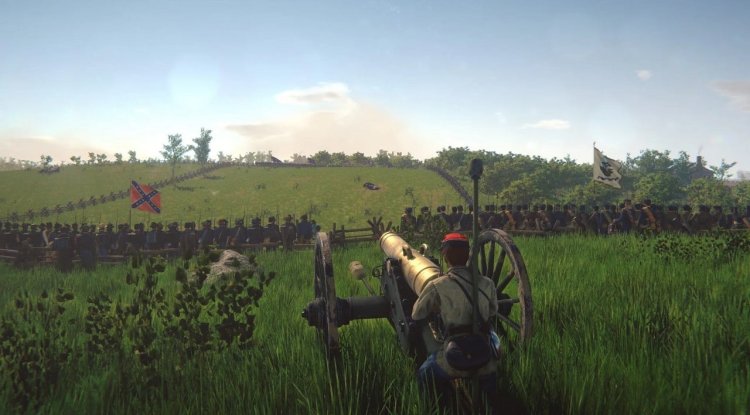 On March 1, 2022, Battle Cry of Freedom will be another insider tip on Steam. We took a closer look at the mix of military simulation, shooter, and role-playing game developed by Flying Squirrel Entertainment.

After the two strategy games Distant World 2 and Terra Invicta, we are now dedicating ourselves to a game that is difficult to classify into a specific genre. Battle Cry of Freedom not only has shooter and role-playing mechanics but even goes in the direction of military simulation. Big plans for a development studio that previously worked exclusively on the Mount&Blade expansion Napoleonic Wars. In addition to huge multiplayer battles in which up to 400 players fight against each other at the same time, Flying Squirrel Entertainment has also added a commander mode. Up to 800 AI soldiers are supposed to meet and our troops can be commanded around in strategy game style.

It doesn't matter whether it's World War I, World War II, or the Cold War - all battles have already been implemented several times in video games. On the other hand, we only know the American Civil War from very few titles. In Battle Cry of Freedom, we slip into the role of either the US armed forces or the Confederates. With a huge arsenal of weapons, the fight between northern and southern states can not only be reenacted, optionally in the first or third-person perspective, but the outcome can also be changed. What role we play in the battle is up to us. While we act as infantrymen on the front line, as gunners with artillery pieces we tend to fire from the background. Building defense systems, supplying ammunition, and constructing bridges, on the other hand, is on the agenda for specialists.

The agony of choice

In addition to the different roles, we should also have a number of functions and adjustments available. We can choose from thousands of historically accurate uniforms and gear. From the position of the hat to the color of the socks, the characters can be customized down to the last detail. Battle Cry of Freedom also offers a wide range of weapons. We can choose between more than 120 melee and ranged weapons and even roll over 20 different cannons onto the battlefield. If the 14 locations inspired by real locations are not enough for you, you can easily create your own maps using the map editor. During the laps, dynamic time of day and weather changes also ensure constantly changing conditions. Most of the environment can also be destroyed.

As already briefly mentioned, Battle Cry of Freedom is an extremely ambitious project for such a small studio. It remains to be seen whether Flying Squirrel Entertainment can implement the huge number of features well and what compromises we might have to accept. So far it all sounds a little too good to be true. We'll know more in just under a month, however, when the title launches on Steam on March 1, 2022.