Both devices are charged via a USB cable with a two-pin connector on the other end that is magnetically attracted to the appropriate position. 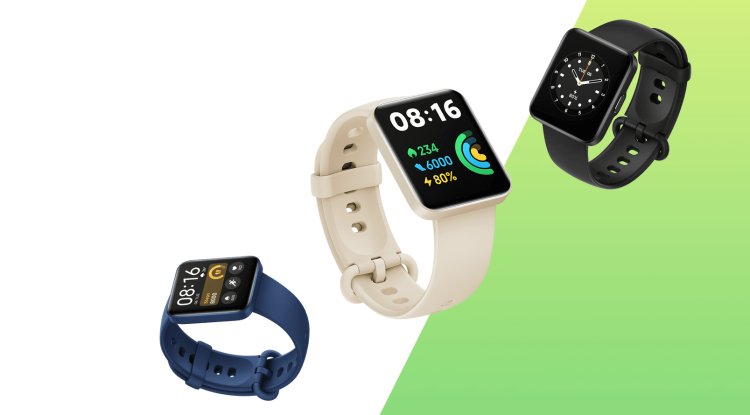 If you are looking for capable smart wearables that do not require you to spend a lot of money, Xiaomi offers two models that were tested on this occasion - Redmi Watch 2 Lite smartwatch and Redmi Smart Band Pro smart bracelet.

As for the watch itself, Lite in the name indicates that it is a relatively affordable device, so it does not stand out in terms of design, materials and workmanship in relation to many similar models. It is a rectangular clock, with rounded corners and relatively compact dimensions, 41 x 35mm and a profile of 10.7mm. The case is made of plastic and made of one part, so a system of optical sensors practically protrudes through the slot on the back, and on the upper side, there is of course a screen, which we would say is covered with glass, not plastic, although the specifications do not state the exact type of protection. The bracelets are interchangeable, but not some universal ones, but only those made just for this model, due to a specific mounting system that is not so easy to activate. The bracelet is made of silicone and it is a bit stiffer, which is not necessarily bad because it helps keep the watch on your hand where you put it, even if you do not tighten the bracelet too tightly. The watch comes in as many as five colors, black, olive green, pink, brown, ivory and navy blue, which looks a little more interesting than plain black, and does not sting the eyes and fits in with everything.

The screen itself is 1.55“ and Xiaomi states that it takes up about 10% more front surface than the Mi Watch Lite, although there are moderate frames on the top and sides and a slightly wider frame along the bottom edge. It’s LCD, or IPS screen type and resolution 320x360 pixels. Although the resolution is high enough to be clear and without pixilation, the display quality is correct, but no more than that, primarily due to the brightness and reproduction of colors that are just average. Also, the watch does not have a light sensor, so it will not adjust the brightness of the screen according to the conditions indoors or outdoors, but you will have to manually change the value and select a level from 1 to 5.

On the main screen, you are first greeted by one of about a hundred skins available in the application, whose selection is not very top-notch, but you can choose something for everyone, whether you like analog, digital, children’s colorful, or even make one with a picture of your choice. As for the interface itself, it is very simple, so by swiping left and right you circulate between 5 widgets for heart rate, forecast, an overview of meeting daily goals, SPo2 and activities. Swipe from the top to get an overview of notifications, and from the bottom, you get a quick menu with the most important settings.

On the right side of the clock, there is a button whose pressing calls the list of applications, which in this case are 19 pre-installed, without the possibility of installing additional ones. From what’s available, there are standard things like a stopwatch, timer and alarm, music and camera control apps on the phone, using the clock screen as a flashlight, finding the phone if it’s nearby, and running activity tracking, or some of the health functions such as heart rate monitoring, blood oxygen saturation, sleep, stress, female cycle for those in need, and breathing exercises. The speed of the interface is not great, there is some small lag, but it’s okay, it’s bearable. Of the additional smart features, there are of course notifications from applications from the mobile phone, as well as the display of messages in full content, without the ability to answer, as well as without the ability to answer calls - you can only see who is calling or rejecting the call.

In terms of health and activity monitoring, in addition to optical sensors for measuring heart rate, stress and sleep monitoring, the watch is also equipped with an accelerometer, gyroscope, magnetometer, and GPS with support for 4 satellite systems. Although we would expect relatively poor performance from such a favorable smartwatch when it comes to sensors, as this is often the case with much more expensive models, we can say that the measurement accuracy is actually quite decent, especially for this price class, so those who want a watch just for the purpose of measuring and tracking activities, this will be one of the better choices for this money.

Pulse measurement is quite correct, especially if you wear the watch a little higher and firmer on your hand, and sleep monitoring is solid, which gives you information about easy, deep sleep and REM phase.

It supports monitoring a number of activities, over 100 different, including swimming, as the watch and 5ATM are waterproof, and synchronization with Fear is supported, not directly, but through the Xiaomi Wear application, which also serves for synchronization and all clock settings. Interestingly, data sharing is also supported with Apple Health, although we’re not sure how many iPhone users will opt for the combination with the Lite version of the watch.

The biggest difference is that compared to those models, the Band Pro is a bit more reminiscent of a smartwatch, due to being about 6mm wider, but also 5mm shorter, more precisely 42 x 24.5mm. The construction of the device is similar to the Redmi Watch 2 Lite, except that Xiaomi states here that the housing is made of fiberglass-reinforced nylon. The bracelet is interchangeable and specific for this model, and it is also made of slightly stronger silicone, of course narrower than the device itself, and the clasp is different, which is not like the one with classic watches as we saw on Watch 2 Lite, but slips through the hole, then the buckle on the outside, as on the Xiaomi Band models.

The screen has a diagonal of 1.47“ and interesting AMOLED type instead of IPS, and with 194x368 pixels, the screen resolution or pixel density is somewhere between Band 5 and 6. The display quality is correct, in fact probably better than the design of the interface, with solid brightness of 450 filaments which also provides decent visibility in bright daylight. Unlike the Redmi Watch 2 Lite, the SMART Band Pro also supports automatic dimming, as well as the Always On display, and it is explicitly stated that the 2.5D screen tempered glass, so with AMOLED, here’s another reason to choose a Pro smart bracelet instead of Lite watch.

The skins are of course adapted to this model and there are not as many of them as with the Watch 2 Lite, about half as many, but you can find something to everyone’s taste, although the design is not very top notch. We have already said that the Always On display is supported, but it comes down to one digital skin that cannot be changed. However, it is possible to set Always On to be used only at certain times during the day according to the schedule you choose to save extra battery power.

As for the interface, it is very similar to the one we saw with the watch, with a small adjustment to the screen format, but also the fact that there is no physical key, so everything is done by touching the screen. Here, too, dragging from above brings notifications, but dragging from below calls up the list of apps, while the quick menu is moved to widgets that scroll left and right. The speed of the interface is better than on the Watch 2 Lite, so navigating the menus and scrolling applications is much faster.

The selection of applications is almost identical, with the exception of the compass, which was missing as well as the geomagnetic sensor itself. Of the missing things, the most important is probably GPS, so there is only an accelerometer and gyroscope, with an identical system of optical sensors as on the Watch 2 Lite model that provides monitoring of pulse, stress, sleep and oxygen saturation in the blood.

In terms of battery life, the Smart Band Pro is declared for up to 14 days of use, and the Redmi Watch 2 Lite for up to 10 days on a single charge. Realistically, if you use notifications and include all supported health monitoring, the watch lasts about 5 days of normal use, while the bracelet can last up to 10 days with the Always On display turned off, or about 4 days with it.

Both devices are charged via a USB cable with a two-pin connector on the other end that is magnetically attracted to the appropriate position.