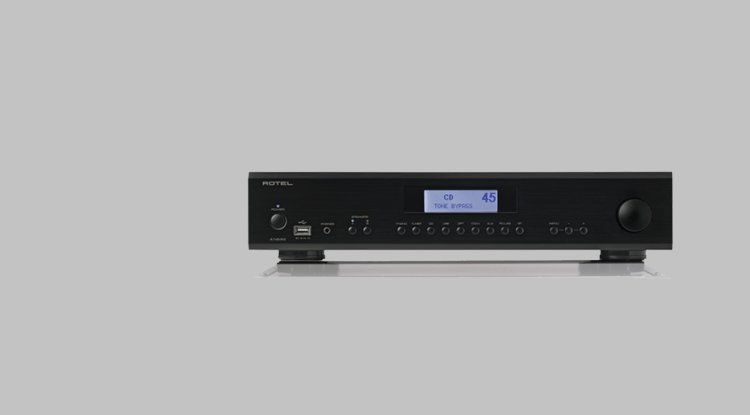 Rotel, a Japanese brand, has been in business for 60 years and is still run by a family. In recent months, the company has begun a portfolio revitalization and entered the market with a number of components, accompanied by the name MKII. The advancement also had an impact on the lesser model series 14.

At first sight, you won't be able to tell the difference between innovative and original models, possibly because of a minor name change. The A14MKII is the highest-end model in the line, but it retains the normal size of integrated amplifiers. The front panel is characterized by sober corporate design elements; it is only distinguished by horizontal angled lines at the edges; otherwise, there is a greater emphasis on maximum order.

A modest yet instructive display with variable brightness sits in the center of the action, and below it is a long line of identical buttons organized in three blocks from left to right. There are two buttons for selecting the speaker outputs, nine for selecting the input, and three for navigating the device's settings. On the far right is a medium-sized volume control with a good tactile reaction, while on the left is a power button, a USB connector for data storage with music, and a 3.5 mm headphone output.

The amplifier's back surface is charged to explode, and it really fits a lot. The extensive equipment begins with five cinch line inputs and progresses through the phono input in the MM standard to a wealth of digital interfaces - there is even Bluetooth or USB for computer connection, but there are also two coaxial and two optical connectors. There isn't much that isn't present. Another USB port for data storage and an Ethernet port next to it appear promising, but they are just for control and "practical" purposes, not as a gateway to streaming.

The amplifier includes a socket without an earth pin, as is standard for the company; they claim that this allows them to better manage the incoming current. The amplifier also includes an above-average selection of control connections. There includes a Rotel Link (3.5 mm jack input and output) for connecting and transmitting instructions between components of the same brand, an input for an external remote control sensor, and two outputs for triggering components using 12V voltage.

It's worth highlighting the included remote control, which is actually pretty ergonomic and provides easy access to all features, but it looks like something out of a 1987 catalog. Rotel, on the other hand, was always more interested in the technical aspects of things rather than the glitz and glam.

Speaking of which, the interior is honestly manufactured within the category - there is a custom toroidal transformer, a covered power supply, and appropriately sized heatsinks. Near the outputs, there is a pair of reasonably large capacitors. The built-in D/A converter has been Roon Tested and supports MQA.

In comparison to the earlier model, it is claimed that the majority of the work remains on the D / A converter, and a Texas Instruments chip with a resolution of 32 bit / 384 kHz now operates in the new topology. The alterations, however, did not escape analog circuits, which rely on the knowledge obtained during the development of MICHI components.

The Rotel provides the A14MKII with a respectable output of 80W per channel up to 8 ohms and 150W per half load. The operating range for line inputs is 10 - 100,000 Hz (+/- 0.5 dB), the total harmonic distortion is less than 0.018 percent, and the signal-to-noise ratio is 100 dB, all of which are solid. The frequency range of the digital inputs is significantly lower, but the signal-to-noise ratio is slightly higher. A damping factor of 220 is noteworthy among the other characteristics.

The Rotel brand appears to have taken its breath away recently, whether it's an expansion with higher aspirations in the MICHI series or a swan song by Ken Ishiwata according to A14MKII, these are creative amplifiers with the adjective MKII.

The highest of the essentials provides current connection at a reasonable price (though it's a shame that Rotel didn't bet on streaming despite the fact that it already has an Ethernet connector), and emotionally more than enough power and control even for non-proportional speakers (so very nice!). and especially any kind of nice, welcoming, and truly musically balanced style, which is neither sought nor desired, regardless of whether you listen to what you want.