Starship Super Heavy is a two-part rocket composed of the well-known Starship, which has already flown several times, and the first stage Super Heavy, which will be able to launch it into orbit. 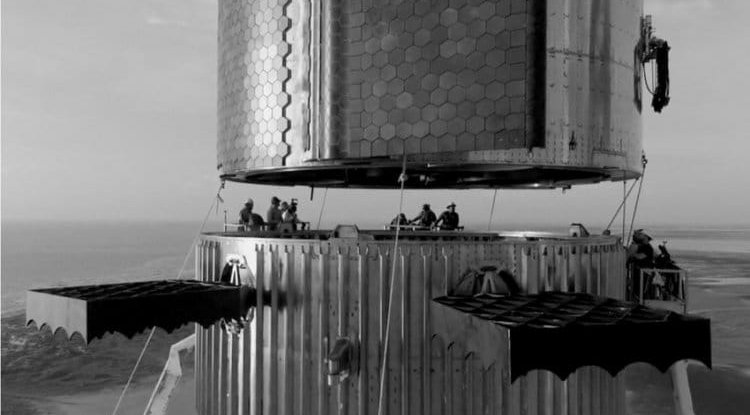 This week was significant for workers at SpaceX’s Starbase facility in Boca Chica, Florida. For the first time, they exported a completely new first stage of the rocket, a 70-meter high Super Heavy, and then placed it on the future orbital launch pad. They then delivered a 50-meter-high Starship SN20 to it, a new iteration of the already well-known reusable rockets, to finally stack them on top of each other for the first time on Friday.

Although it was only a test connection, this move briefly put together the world's tallest and most powerful rocket - the Starship Super Heavy. In the cover image, you can see the details from that connection and the workers in the rocket itself, which well illustrates its size. The rocket has a diameter of 9, a total height of 120 meters, which makes it the tallest rocket ever assembled.

Its mission is to be the first fully reusable two-stage rocket that will be able to travel into orbit, from one place on Earth to another, and then further - to the Moon, Mars, and back. The first test flight, from Texas to Hawaii, with almost the entire orbit around the Earth, was scheduled for July but did not take place. Given that the rocket is nearing completion, we could expect an orbital flight in the coming weeks or months.

This rocket is special in many ways, but its propulsion seems to be the most impressive detail. A 120-meter-high and up to 5,000 tons heavy rocket (with cargo) should be launched into orbit by as many as 29 Raptor-type rocket engines. The first stage, Super Heavy, will only serve to lift to orbit, and then return to the ground. It won’t land there completely on its own, as the first stages of SpaceX’s Falcon 9 do, but a special tower will help it do so, “catching” it just before it touches the ground. Anyway, the first stage will have to target the landing site very precisely and slow down on its own in order for the pliers on the tower to catch it successfully.

The second stage, the Starship, will be able to fly to the other end of the world, to the Moon, or in some distant future to Mars, after the separation, and return. This will allow it to be fitted with six Raptor-type rocket engines (three designed to work in the atmosphere and three for vacuum conditions in space). It is also equipped with a heat shield that will allow it to enter the atmosphere, cruise on the hull ( belly flop ), and then slow down before the vertical landing.