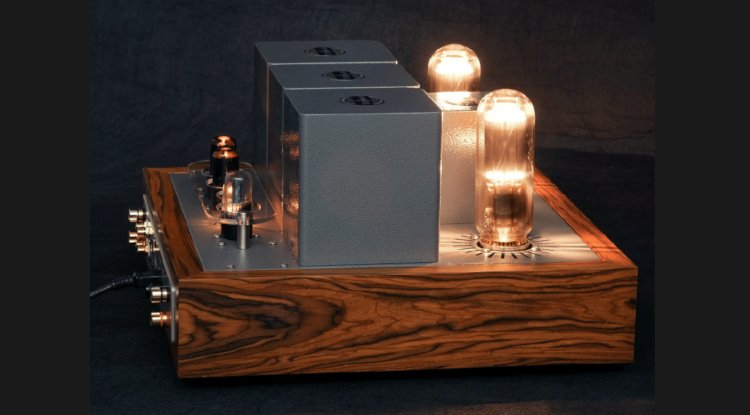 Are tubes, particularly triodes, better suited to faint-hearted, quiet listeners? If you can afford the Thivan Labs Lion 805A, no way. Ancient technology reveals its bold, grippingly dynamic side here - stunning!

The stereotypical triode listener turns on his pricey, fragile, and underpowered loudspeakers in the evenings to unwind after a somewhat difficult day at work - with pleasant music, such as jazz standards in which Japanese singers attempt to sound like Nina Simone. And, of course, don't be too loud. If you want to do anything unusual with your tube amp, you'll need either incredibly efficient loudspeakers, which are naturally pricey and huge, or an amp that cultivates tube sound culture while still offering strong two-digit power reserves.

The latter are plentiful, but in push-pull construction, which dilutes the pure tube theory once more: why do these components have their kilometer-long, straight operating characteristics if you only feed them the music in fragments of positive and negative half-waves - and then hope that these halves will eventually come together again without edges and protruding electrons? Only in single-ended or single-ended operation does a single tube (or several, but in parallel) vibrate the baton across the entire range of the music signal.

The Thivan Labs Lion 805A provides the exact answers you've been looking for: Yes, it's not only lovely but also rather great. It provides access to a world of sound that is rarely available - especially with an integrated amplifier. And, undoubtedly, the variety of loudspeakers is expanding dramatically. It must, however, not be wholly arbitrary.

To give you a better idea of the size, the chassis (which is made of stable multiplex panels and has a true wood veneer) has a floor plan of 45 x 45 centimeters and a height of 30 centimeters without the protective grille. Nothing should come of it at first, because the amp generates approximately half a kilowatt of heat when in operation.

Strong as a lion: Thivan Lion 805A

Thivan Labs is a Vietnamese firm whose name is simply formed from the first names of the two founders and principal developers: Nguyen Hoang Thi and Nguyen Anh Van, who met while studying electrical engineering at Ho Chi Minh City University. Joe Nguyen, This's wife, also plays an important role, as she is in charge of sales, product design, and sound tuning. Thivan manufactures interesting huge loudspeakers, which have a reputation for good price-quality ratio - and which were fully sold out during the testing time.

Thivan specifies the Lion 805A with the desired 40 watts per channel - and considerably more in pulse peaks. Unquestionably at far larger levels of distortion than a transistor would tolerate. Tube amps are given this metrological advantage because their distortion by-products are mostly perfectly harmonically graded low-order harmonics — which the ear can only detect in extremely high dosages. However, it makes no difference which standard is used to measure: The Lion is a performance lion among single-ended triodes, and it typically outperforms amps with other types of output tubes.

For example, if an EL34 in a triode circuit produces eight watts (as in the charming Unison Simply Italy), a 300B in the Cayin CS-300A similarly produces eight watts, and an 845 can transfer three times as many electrons, the 805A triodes on the Thivan quickly raise the factor by a factor of five. The 805 is a directly heated high-frequency triode, like the 845, and was employed as a radio transmission tube for decades beginning in the 1930s. Its offshoot 805A is a little more recent, with no electrical differences but mechanical differences due to different contacting: The anode voltage is provided through the base, making it safe to touch, rather than through a loose cable and an "anode cap" from above. With an anode voltage of over 1000 volts, this is clearly the more sensible solution.

Looking through the beer-bottle-sized high-vacuum glass enclosure, the viewer is struck with awe and apprehension: oh gosh, these gigantic graphite anodes are dimensioned for substantial power losses. It's getting hot outside. If there's one tube that deserves a (removed) protective cage, it's this one. Even when turned off, the triodes are impressive, but when you turn them on, they go one step beyond. The cathodes are then subjected to 30 watts of heating current, which causes them to shine brilliantly due to the thorium coating.

As a result, when the Lion 805A is turned on, everyone in the room sees it. Visually, as mentioned, but also sonically, because the massive mains transformer initially pulls a large amount of electricity. When the various operating points and voltages have settled in after booting and the last cold start humming waves have vanished, the complete electronic organism settles down blissfully to idle rest and acts extraordinarily civilized in a subsequent operation.

It cannot withstand a tiny mechanical hum, as with all devices with extremely big mains transformers, dependent on the DC offset load of the mains current, although this can scarcely be avoided with such huge electrical systems and does not hinder listening either. The Lion 805 usually purred louder around midday in my house, possibly because many neighbors load the grid with their electric stoves and bend the 50 Hertz sine wave accordingly. All larger amplifiers accomplish this to varying degrees.

Because the Lion 805A weighs about 60 kilos, it requires a highly firm table and two strong arms to unload. The vast mass is mostly centered on the three powerful transformers, which are lined up on the thick-walled, hammered painted sheet steel chassis, as is typical for this style of amplifier. The output transformers are located on the outside, with the main transformer located in the center.

And all three are dimensioned this way for a reason: the transformers receive the entire anode voltage from single-clockers and require huge cores with an air gap as well as multi-layered nested windings to perform safely on the one hand, and with minimal distortion and broadband on the other. And, given that one-beat Class A is the most inefficient way to amplify music, it's not unexpected that the mains transformer must constantly span approximately 500 watts when in use. Thivan manufactures all of its transformers in-house, with Mr. Van serving as the proven transformer specialist.

The 805s are powered by two powerful 6V6 triodes with black anode plates in blackened glass bulbs - probably New Old Stock, however, the actual manufacturer cannot be determined. As a preliminary stage, two double triodes (12AU7 and 6SN7), which appear to be from historical stocks, are used. The end tubes, on the other hand, are from current Chinese production by Psvane, a premium manufacturer that branched out from the larger Shuguang company a few years ago.

While the small tubes have already been inserted into their sockets, the Psvane 805A are still in their original boxes, waiting to be lowered into their enormous bayonet sockets and sealed in place with a short clockwise twist.

The Thivan is under-equipped in terms of connection technology, even by tube standards: there are three high-level inputs on the solid, beautifully carved rear wall, two of which are a cinch and one XLR. Because the XLR is only connected internally with one leg, it provides no technological advantages.

The loudspeaker cables have only one pair of screw connectors for each channel, which is rare for tubes: The amplifier can handle "4, 6, 8, 16 ohms," according to the data sheet, although it serves all loudspeakers with the same transformer tap. Thivan's own speaker range fluctuates between 4 and 8 ohms depending on the model, therefore the amp doesn't appear to have a preference.

The Lion 805A is a powerful, energetic single-ended tube amplifier. The Thivan requires carefully selected loudspeakers in order to truly demonstrate its potential: high efficiency is desired, and high and/or flat impedance is strongly suggested. The amplifier's remarkable performance data does not make it an easy-care beginner's tube, but rather a quick racehorse for experienced tube aficionados.