The play never ends with these headphones

Logitech has produced a headset that is equally usable at home and on the go. the G435 Lightspeed has superior comfort and surprisingly good sound quality. 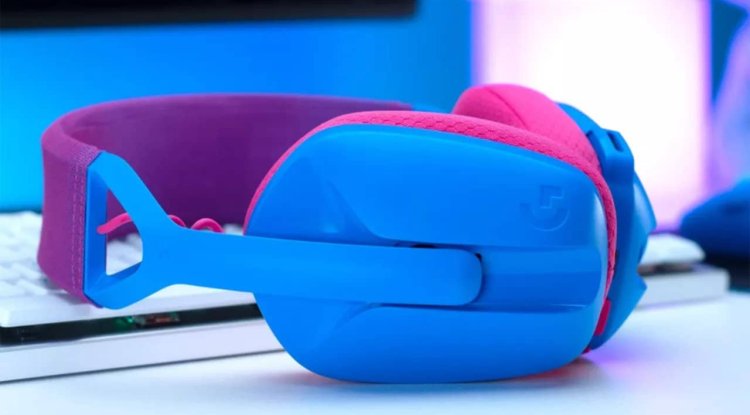 Logitech has produced one of the few headsets that are equally usable at home and on the go. If you have to choose just that, the G435 Lightspeed will try to convince you with its superior comfort and surprisingly good sound quality.

Logitech has been producing some of the most interesting headsets on the market lately, in part because they don’t look like any competing product. After the great G733 Lightspeed wireless model and the lightweight, wired G335, it's the G435 Lightspeed's turn. This is another wireless headset, which follows the design philosophy and construction guidelines of the other two mentioned models, and the price of $ 80 is placed between them. Logitech is once again using extremely light, very flexible, plastic materials, painted in striking color combinations, which are obviously aimed at younger audiences. The G435 Lightspeed is available in measured black, but also lilac-white and striking blue-purple .

In all three cases, it is one of the lightest headsets we have ever tried. The tongue on the scales stops at 165 grams. When paired with very compact exterior dimensions as well as carefully selected materials in places where the G435 Lightspeed comes in contact with the scalp and ears, you get a really impressively comfortable headset, which is practically imperceptible on the head. It should be said that the G435 Lightspeed is deceptively small. At first, it seems almost as if it is intended for children's heads, but when your author timidly put it on his bulky headband, the headphones readily slid along the inside of the frame and stretched to the required "height".

Logitech points out that this is their "greenest" headset in history. At least 22% recycled plastic was used to build the device, the packaging is made of cardboard obtained from forest trees managed by the Forest Stewardship Council, and the headset and the associated box are certified as "carbon neutral", which means that in the process of their production the environment wasn't polluted. Canvas pads can be removed and recycled appropriately, and even more interestingly, the same goes for the battery - the user manual explains how to remove it and dispose of it in the appropriate type of waste. Although the average user cares about this whole story at all, it is still an initiative worth highlighting, praising, and supporting.

In a purely practical sense, the Logitech G435 Lightspeed does not look at all luxurious, or even particularly robust, but the exceptional flexibility of its case will ensure that it survives the hassle of everyday carrying, while the complete absence of squeaking plastic parts still gives the impression of overall quality. making.

Why would you even want to take it out of the house? Because, in addition to the usual 2.4-gigahertz radio connection, it can also be connected wirelessly via Bluetooth. Using the included wireless receiver, the G435 Lightspeed is paired with desktops and laptops (Windows, macOS), PlayStation 4, and PlayStation 5. The Bluetooth connection is primarily for pairing with mobile phones and tablets, although nothing prevents you from connecting it to a laptop, especially because then you can leave the wireless receiver at home, plugged into your desktop or console.

There are two basic differences between a radio and a Bluetooth connection on the Logitech G435 Lightspeed. First and foremost, the radio connection has less wireless latency, so it is much more suitable for slightly more demanding gaming. Moreover, in this mode, the G435 Lightspeed is no different from the classic wired headset. The latency of Bluetooth is not great, but it is noticeable - just enough for more demanding mobile players, especially those who spend time in mobile network shooters, should look for a more suitable model. If you really insist on using this headset to play on a mobile phone, then be sure to activate the SBC codec in the Bluetooth settings of your device, where the wireless latency is lower than the other supported codec, AAC. With neither of these two Bluetooth codecs, the latency is not so great that there would be a delay in the sound behind the image when watching videos on YouTube, Netflix, or third service.

The Logitech G435 Lightspeed isn’t the first headset with the ambition to be used in and out of the home, but similar competing attempts have regularly tangled in the microphone aspect. For example, with the SteelSeries Arctis 3 Bluetooth, the microphone slides into the headset, but its head is always visible. Some Cooler Master and Roccat models allow us to physically separate the microphone, but then we have another problem - the microphone does not go with us, so the headset remains without part of the functionality and effectively turns into headphones.

Logitech tackled the problem by integrating a microphone into the left handset, making it completely invisible. Of course, since such a microphone is not in front of our mouths, the built-in capsule must capture sound in a wide field, and with that comes a voluminous capture of background noise. The recorded voice is intelligible enough for voice communication with comrades and handy phone calls, but for longer playing you will definitely want to settle in a quieter room, where your friends will not be disturbed by the noise of your TV, pet, or family.

The left earpiece contains a Power key, two volume keys, and a mute key. Interestingly, the G435 Lightspeed does not come with any software, so the combination of the mentioned keys is also used for some additional features. For example, holding down the mute key toggles between radio and Bluetooth wireless connection, and holding down the power and mute keys starts pairing via Bluetooth (only needs to be done once).

In addition, pressing the mute button and one of the volume keys simultaneously controls the maximum available headset volume. It can be 85 or 100 dB. This feature is rarely seen and will be interesting to parents with small children because they will be able to easily limit the volume of sound and thus preserve hearing.

You can buy this product on Newegg for $ 80.