The Suicide Squad is full of sex and violence, which in the age of a pandemic cannot be out of place 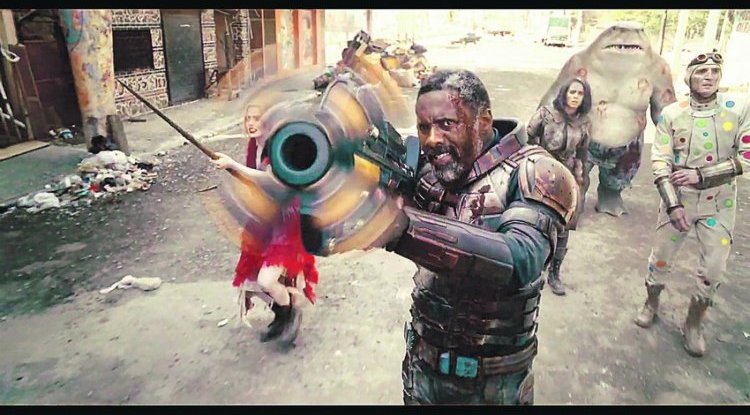 When quite a few visitors stay until the end of the check-out rush hour at the cinema and continue the conversation and when the lights come on, you know that the film is something special. And "The Suicide Squad" is really something like that.

The first one introduced us to the world of naughty superheroes who languish in prison for their sins and transgressions, it had the rating PG-13 (Parental Guidance-13, children under 13 must watch it accompanied by the parents) which means that it wasn’t overly radical about scenes of violence and sex. It was financially quite successful, $ 746.8 million gross in world cinemas, that’s a lot when it comes to DC Comics comics movies (Marvel movies do much better), but the fans of that kind of blockbuster weren’t exactly inclined.

Even director and screenwriter David Ayer said it was not the realization he envisioned, it was more of a Warner Bros. version, and that - when given the opportunity - he would be happy to present his original. "The Suicide Squad"  had a completely different premise, with director James Gunn making a name for himself in Disney's blockbusters "Guardians of the Galaxy" based on Marvel comics.

As negotiations on the third edition of the franchise began, right-wing moral watchdogs warned of his earlier work and comments mocking rape, pedophilia, and the Holocaust, so Disney decided to break up with its directorial star of dubious past. Warner Bros. immediately jumped in and offered the filmmaker to choose whatever project he wanted: he opted for "The Suicide Squad," but with the show rating "R" (Restricted, under 17 can only watch it accompanied by parents). to which the production company immediately agreed.

A lot of sex and violence in a time of pandemic cannot be out of the question. Meanwhile, Disney has also reconciled with the director, and let him prepare "Guardians of the Galaxy 3", so his career is currently in full swing. The very beginning of "The Suicide Squad" is silly enough. Amanda Waller ( Viola Davis ), the head of the secret intelligence service that controls "suicides" or, gathered the squad for action on the Latin American island of Corto Maltese (of course, the name is dedicated to the cult comic Hugo Pratt). Its government has cooperated with the US, but there was a military coup, led by generals turned away from the most powerful country in the world, which disrupted relations with the great powers: first, announcing the fact that there the Nazis sheltered an alien of immense power and that the Americans were heavily involved.

Chief Waller's diabolical nature is evident from her plan that she sent not one but two squads, the first being composed so that it is easy to liquidate, although it includes, among others, the evil heroine Harley Quinn ( Margot Robbie ), the trusted Colonel Rick Flagg ( Joel Kinnaman ) and the charismatic loner Savant ( Michael Rooker ). When the first thing happens as planned (although some survive), the second squad takes off, and in it are the authoritative Bloodsport ( Idris Elba, who completely replaced Will Smith, who played a similar character named Deadshot in the first film), a psychotic Peacemaker ( John Cena ), twisted Polka-Dot Man ( David Dastamalchian)), the likable Ratcatcher II ( Daniela Melchior ), who can't be separated from her rat Sebastian, and Nanaue, a hybrid of man shark (voice of Sylvester Stallone ).

Another Waller's dubious plan, when the second squad managed to get unhindered on Corto Maltese, is that she ordered them to liquidate the bandits who captured Colonel Flagg, which they do, and Nanaue especially enjoys it, devouring everything that arrives, however, it turns out that they were members of the democratic resistance movement on the island. They have already saved Flagg and are now planning to overthrow the military junta with him, but now the squad has decimated them badly.

It is necessary to know at least the outlines of the plot to face the abundance of extravagances offered by this film, by many the most intriguing fantasy about superheroes over the last decade. First of all, something about the superheroes themselves in The Suicide Squad. Peacemaker does not have that nickname for no reason, he is ready to kill dozens of men, women, and children if it will help world peace, of course, as it would suit him and his bosses. Ratcatcher II (number one was her father) embraced rats because even the most despised creatures in the world have a right to life. Thanks to her amazing toy, she can summon them not by hundreds but by thousands. Polka-Dot Man is able to send dozens of deadly polka dots to the opponent in a moment of rage that will tear him to pieces.

How is this anger provoked? By thinking of his mother, whom he hates the most in the world because she wanted to turn him into a superhero against his will: each of his enemies takes her form, and thanks to that the fight is over in an instant. Nanaue, on the other hand, enjoys dismembering the human body: if you are bothered by the violence on the screen, you better not even try to watch this movie.

The most bizarre character from Corto Maltese is called The Thinker ( Peter Capaldi ), a skinny scientist with his head studded with tentacles, and his specialty is the study of space monsters that are kept in a special Jötunheim tower on Corto Maltese. When Ratcatcher II threatened him, "What would you say if a dozen vicious rodents climbed through the opening of your colon?" the Thinker answered her, " I think you would be very surprised by my answer!"

For the first time in an expensive film

The most unusual scene involves Harley Quinn who is no longer an antisocial psychopath at all but helps the Squad at every opportunity. When she kills, blood does not gush from her victims, but brightly colored flowers sprout from everywhere. You’ve never seen anything like it in an expensive Hollywood movie.

A small break from the violence is also represented by the scene with Nanaue in an aquarium somewhere in Jötunheim: it is performed in silence until small fish in lovely dresses appear and try to communicate with the beast through thick glass. The scene is surreal, but what follows is cruel and unexpected. “The Suicide Squad” is a great film not only because it breaks the Hollywood conventions, but also because James Gunn even watches what happens to his extras.

It’s not just a matter of the second but also the third plan, you just have to pay attention to everything that’s going on on the screen and preferably watch the movie one more time. We have not had the opportunity to see something so bold and innovative in recent years, especially not in products with a budget estimated at $ 200 million.