This Piaget watch will give you all the sporty luxury ... under your rules

The legendary Polo Skeleton, a benchmark in Haute Horlogerie, returns revitalized, ultra-slim, and ready to usher in a new era of style. 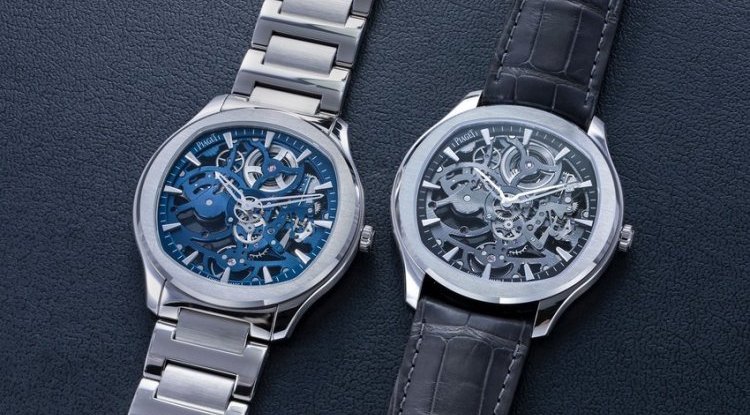 The art of 'skeletonizing'

A skeleton watch is always impressive, so it is worth knowing that this "skeletonization" is behind an intricate reduction of dials and movements to a minimum, to reveal the mechanical heart of the watch. The difficult thing is not that a piece with this feat catches the eye, but that, in practical terms, it is legible without compromising its mechanism.

Piaget does that flawlessly in the new Polo Skeleton, and also with the ability to achieve an exceptional slimline machine. The legendary company has delivered the slimmest skeleton movements ever seen, with tourbillons, moon phase, diamond settings, and automatic winding. That's what this completely skeletonized new version of the Piaget Polo is all about.

The shape of the case of the Polo Blue Skeleton is recognizable by its hallmarks, such as the curved case topped by a round bezel, its cushion-shaped dial opening, and its slim profile, with a diameter of 42 mm, 6.5 mm thick in steel, with a bezel with polished and beveled sides. In terms of performance, it is set apart by Piaget's fully developed and produced in-house 1200S1 self-made movement, which is 2.4mm thick - similar to a wafer.

The founder of the brand, Yves Piaget, said that "the whole philosophy of the Polo can be summed up in one sentence: it is a bracelet-watch instead of a mere wristwatch". That is true in this high-design model, full of elegance, practicality, and comfort through its slimmer casing. Visually, the contrast between the silver glitter of the numbers and the skeletonized hands on the blue of the bridges is also surprising. As a result, the readability is flawless. The Polo Skeleton is as robust, reliable, and practical as the other models, with 44 hours of power reserve and water resistance up to three atmospheres.

Your style, your rules

There are two design options for the new watch from the watchmaker that you can choose according to your style. The first with a movement in Piaget blue PVD, the second in a slate gray finish. In both, the skeletonized movement and the hands have been reduced to achieve maximum transparency, which is accentuated by the transparent sapphire crystal case back. Each Blue Skeleton Polo is delivered with both an integrated steel bracelet and a crocodile strap with a folding clasp, which you can easily change according to your preference. As a final note, the lightness of its weight on the wrist is astonishing, compared to previous models.