Georges Kern feeds us with nostalgia. A historic pilot's watch aboard four legendary aircraft. They are the five new Super AVIs from Breitling. 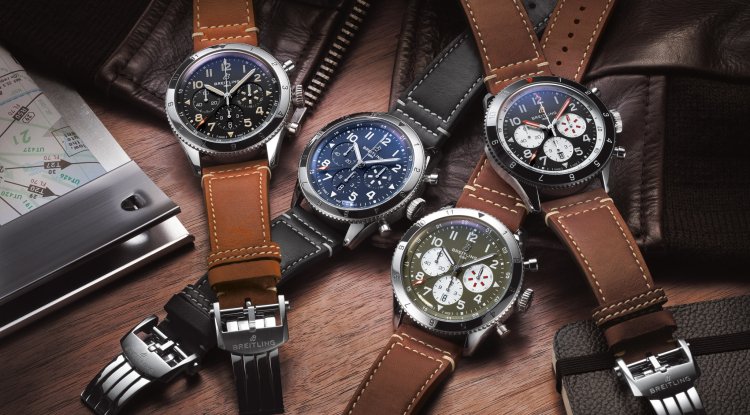 A historic pilot's watch and four legendary planes. They are the five new Super AVIs from Breitling. Georges Kern fuels us with a bit of nostalgia to recapture lively emotions aboard the North American P-51 Mustang, Vought F4U Corsair, Curtiss P40 Warhawk and Havilland Mosquito. Legends to conquer the sky.

Historic Aviation to recapture Breitling's genuine ties to aviation in the 1930s and 1940s. The firm then became a major manufacturer of aeronautical instruments for aircraft cabins. The new Breitling Super AVI is completely inspired by the design of the Avi Co-Pilot Ref. 765, which evokes the watches produced by the Huit Aviation Department in the 1930s. An instrument watch whose reissue in 1953 would take center stage alongside the Navitimer.

Super Avi maintains the spirit and functionality of a robust case chronograph and Arabic numeral dial with maximum readability. The new pieces are presented in a 46 mm steel case with 30-minute and 12-hour counters. In addition to the date window at 6 o'clock, the highlight of this Breitling Super AVI is the addition of the GMT function with a new red pointer hand.

This functionality can be used alongside the bezel to obtain up to 3 different time zones. Its larger dimensions also clearly differentiate it from the Aviator 8, two families committed to recovering the vintage legacy of Breitling's innovative pilots' chronographs, now classics. Technically, Super AVI mounts the caliber Breitling B04, a COSC movement with a 70-hour power reserve. The sapphire crystal back of the watch shows the mechanism, where the silhouettes of airplanes stand out.

"This collection embodies that nostalgic feel to the early days of aviation when aviators used their watches as onboard instruments," explains Georges Kern, Breitling's CEO. "But you don't have to be a pilot or a vintage aeronautics enthusiast to appreciate its exceptional craftsmanship and the robustness of its design." Of the four pieces released in tribute to the four iconic aircraft, the Curtiss P40 Warhawk ($ 10,610) and the Havilland Mosquito ($ 10,760) play on the contrast of color on the dial and counters, while the P-51 Mustang and the Vought F4U Corsair show the color black and blue completely in their spheres, respectively (10,610 USD). The four launches are completed with a fifth piece, a version of the P-51 Mustang in a rose gold case ($ 24,830).

“At the fore here is our watchmaking DNA, while the reinterpretation of the four aircraft gives the series excitement and bold graphic appeal. The complete set evokes the spirit of the early days of aviation, ”says Sylvain Berneron, Breitling's Creative Director. “We cannot forget that Breitling pioneered aviation tool watches such as the Ref. 765 AVI. It is such a valuable heritage that we not only had to preserve it intact but also rewrite it for the 21st century. " Following the launch of the Top Time collection, the new Super Avi was officially unveiled at the Breitling Summit Webcast - Episode 6.