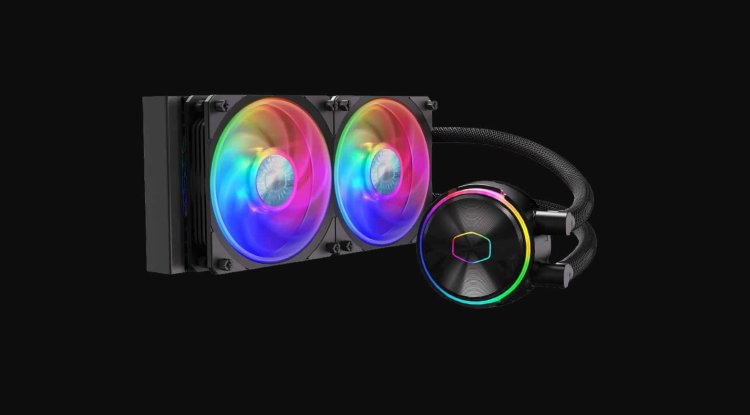 MASTERLIQUID PL240 FLUX is the latest member of the prestigious Cooler Master series of pre-configured water cooling systems for CPUs. A newly redesigned head, better visual aRGB effects, more efficient fans are enough trump cards in the fight against strong competition. What is best in all is the fact that the FLUX cooler works better than its predecessor, allowing automatic overclocking systems to speed up processors to high frequencies without any user assistance.

We must admit that we have not seen a new model of water cooling from the prestigious Cooler Master Master Liquid Pro series for a long time.

Finally in front of us is the MASTERLIQUID PL240 FLUX.

Although we are all well aware of this cooling system for CPUs and the statement of many users that there is not much new to add and do, manufacturers are trying to install from generation to generation some fine improvements and thus improve performance.

This primarily refers to the main elements of such a cooling system: pump, radiator, and of course fans. We often ask ourselves why manufacturers do not install larger double-thickness radiators in order to increase the cooling capacity, but the industry standard in this class has set exactly the specified specifications and standards of radiators that are harmonized with the pump power.

Asetek is the one that designed the AiO concept and practically set the standards and patent for this compact water cooling solution, so other manufacturers (CM, NZXT, Corsair, Arctic, and others) must follow such guidelines. In a word, don't expect more in the near future, that is. thicker radiators in this class of coolers.

It is now quite clear what was the main focus of improvement in the concrete example of this Masterliquid PL240 FLUX model. First of all, it is a cooling head with a pump and a large copper cold block. And we immediately notice the difference compared to the old Masterliquid Pro which had a high cylindrical head shape, while the new FLUX has a far smaller profile, is more elegant, nicer, and easier to mount.

The CM had to fundamentally redesign the head structure, which still uses a dual-chamber system to separate the supply of fresh cold fluid for the CPU cooling unit and hot fluid heated during the cooling process of the pump motor. We will also mention the detail that this FLUX model uses a ceramic bearing of the pump motor for less heating.

The chambers are designed so that the flow of coolant targets the so-called hot spots which speed up the heat exchange process. Because don't forget that the new processors heat up unevenly and create critically hot spots on the cooler since they emit a large amount of heat energy in a short time on a small area, the so-called "Heat spots". In addition, water pressure and flow in a closed system such as AiO needed to be optimized to further improve performance.

In order to do that, the characteristics of the impeller speed must be synchronized in the right way in order to bring the operation of the pump in full harmony with the characteristics of the copper cooling block. And its area that touches the CPU cooler is increased and at the same time lies better, achieving a larger contact area compared to earlier models. In the context of the microchannel density through which the coolant flows, the thickness of the main unit is fine-tuned to achieve the effect of maximum heat transfer from the heated CPU during its operation under full load.

All this is in the context of new processor models that draw a large amount of electricity and thus release a significant amount of heat energy. A classic example is the new Intel Core 12th generation in its currently strongest version, which in moments of maximum turbo step, draws over 270W of electricity.

Here is another trap, because in addition to efficient heat transfer and dissipation to the environment, it is important to make sure that the cooling system is not too loud during operation because you need a fast pump and strong fans if they make unbearable noise near your head. That's why CM used advanced Air Balance fans with a ring that actually interconnects on the outer edge of individual SickleFlow propellers.

This reduces vibration during maximum speed and increases its stability in operation, maintaining the exact distance between the inner wall of the fan housing and the space where the propellers rotate, which is the space where the zone of high air pressure is achieved. The inner wall of the fan housing has a sloping rim to enhance the effect of the direct flow of fresh air, which actually achieves the effect of increased air pressure for better cooling and quieter operation.

It is easy to install with the help of already tested and seen solutions in similar Cooler Master AiO coolers. In the case of the MasterLiquid Pro FLUX model, a mechanism for mounting an Intel LGA1700 processor has been added, ie. of these latest 12th generation Core models.

Some additional features include the zero RPM mode of built-in fans, whose operation is controlled through the BIOS or the accompanying software tool of the motherboard when it is possible to determine the processor temperature threshold at which the fan will turn off and this FLUX becomes completely silent. Otherwise, the fans are quiet because they start from an inconspicuous 650 rpm to a maximum of 2300 rpm, announcing a maximum of some 35 dB of noise.

Another detail that the new Masterliquid Pro FLUX brings to your attention is the second generation of addressable RGB lighting for which you do not need special software but the one you get with the motherboard since all newer models support this feature. This feature allows users to control multiple aRGB devices connected using an appropriate extension cable. Splitter or splitter as you already call it, is connected to the CM controller.

It is usually delivered in the package of this cooler. We come to the key part - how this FLUX really works and behaves in real conditions of use. So don't expect some spectacular performance breakthrough because it's not realistically possible. Nor is this FLUX a reason to immediately throw away your existing AiO and replace it with a new Masterliquid Pro model. But it is better and this can be seen in those fine details when it comes to the operation of new processors, such as slightly shorter rendering time of a single scene of a few seconds or higher PBO and XFR2 overclocking values.

New processors like our Ryzen 7 5800X have a smart AI algorithm that, using a network of sensors located on the core of the processor, recognizes a better cooler so that the processor pushes to the extreme limits, ie. higher frequencies, and in our case, it is as much as 5219MHz for the single fastest core, noticeably higher than the hitherto tested water cooling models of this type.

Maybe the graphs in our video don't show it to you in the right way at first, because AMD Sense Mi telemetry and its AI algorithm push the processor higher and faster whenever they feel the space in a split second, which is sometimes really hard to measure because it is about finesse, even the smallest details that may be essentially less important to some, but to enthusiasts and those who want more and better all the time - are of decisive importance.

And one more detail when it comes to impressions at work, you will notice that the monitoring software reports that the pump is running at numbers that exceed a somewhat incredible value of 9000 rpm. Of course, this does not correspond to the real situation, and it is a consequence of the fact that the new technology used by Cooler Master is used, and which is still not recognized in the best way by motherboards. In these situations, divide the value by 3 and you get the right pump speed, or if a newer motherboard firmware is available - be sure to update it!

Finally, our recommendation - if you are planning to buy one of these coolers right now or the time has come to replace the existing one, be sure to consider the new Master Liquid Pro FLUX series, which is made in a radiator version of 240mm or 360mm. The price for the first one is around 170, and for the model with a bigger radiator around 200 $.

- Quiet and efficient cooling in operation