HONOR Watch GS 3 is the company's most luxurious smartwatch to date and as such is intended for people who are looking for an elegant, but reliable and high-quality watch for everyday use. 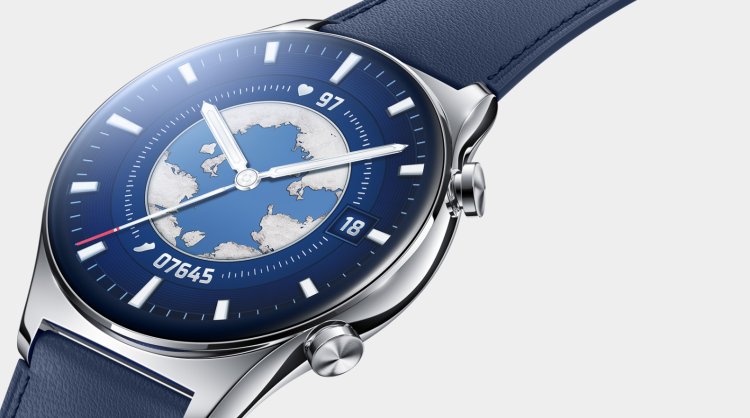 Previously, we had the opportunity to wear and use the HONOR MagicWatch GS Pro, a robust watch with a battery that lasts up to 25 days, but now it is a watch that has a new approach to the implementation of similar technologies.

The HONOR Watch GS 3 is different, and the family ties with the Huawei company are still visible in several segments, although, as in the smartphone segment, they are becoming less pronounced.

It's simply impossible to overlook the fact that this is an upgraded version of the Huawei Watch GT 2 smartwatch, which doesn't support apps but allows Bluetooth calling, has a battery that lasts about two weeks, comes with upgraded sensors for health monitoring, and is available in three editions - with a leather bracelet, with a silicone bracelet and additionally in a silver version, also with a leather strap.

The modern look is a bonus for some of the users who are looking for an extremely elegant watch, which so far has not been seen in this class at this price, and for everyone who is looking for an everyday watch that easily fits into any style, there is a version with a silicone bracelet.

Classic design never goes out of fashion, so the new HONOR watch additionally enhances the aesthetics thanks to the borderless design, i.e. full-screen curved 3D glass. This 3D glass surface allows for a wider look and a better feel when operating the watch, without any pinching of the fingertip during use.

The design of the screen is both modern and artistic, suitable for people who are looking for more beautiful things, and follows a simple manufacturing philosophy, which is the imperative of consumer electronics today.

The live watch looks great, looks extremely modern, and easily attracts attention regardless of its reduced appearance, which clearly speaks to the success of the design of this piece of accessories and the very style of its future owners.

Of course, the HONOR Watch GS 3 is waterproof (5 ATM, i.e. up to five atmospheres or 50 meters underwater) and allows the automatic ejection of water from the case after swimming (you will hear a sound like a crackling, which forces the water out of the case with vibrations and this lasts for about 15 seconds, with the user being advised to shake his hand at the same time).

The watch connects to HONOR phones and all other Android 8.0 or later devices via Bluetooth 5.0 connection (or lower-level connection supported on the phone, with support for BLE / BR / EDR standards) and the HONOR Health application. Absolutely all settings are made in the application, and this is the primary thing to do after buying the watch.

In the app, you enter your personal information about your height, weight, birthday, and fitness goals, based on which the watch builds a profile and adjusts its measurements and accuracy. You can pair the watch with HONOR and other Android phones ONLY after entering the HONOR ID on the phone and the Health application, so do it before the actual pairing process, which takes place almost automatically - turn on the watch and wait for the phone to be recognized through the HONOR Health application and the watch.

At the moment, iPhone devices are not supported, but this will be changed, as we read on the company's website, through some of the next updates of the watch, and during the test of a couple of weeks we received two major updates, which improved the stability of the system, expanded the list of supported applications for a response from the clock and brought some other improvements.

You'll easily get two weeks of autonomy with three or four fitness activity measurements per week, with continuous active monitoring of heart rate, stress, blood oxygen, notification forwarding, sleep monitoring, and weather forecasts. Turn off one of the options if you don't use it and the autonomy is extended.