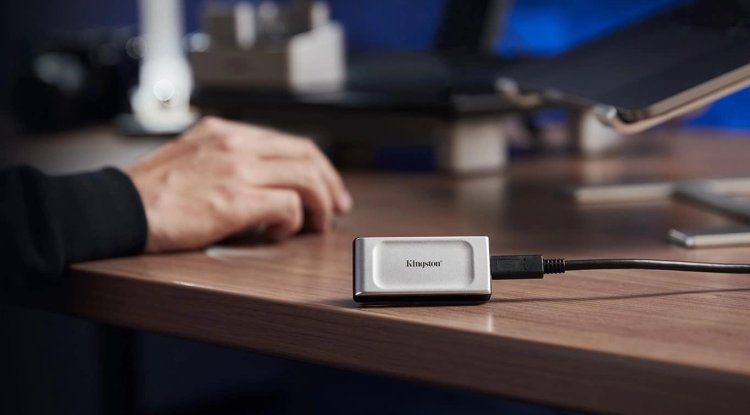 Most USB memory is very cheap, but at the same time very slow. But what's at the other end of the spectrum? From Kingston, the XS2000 came to us for the test, a new external SSD that connects to the computer via a USB 3.2 Gen 2x2 interface.

Although USB sticks are now high capacity and very affordable prices, their performance is in the vast majority of cases very low. This is where we come to an absurd situation – we have a medium of relatively high capacity, with a speed (primarily writing) that is so low that the medium is impractical to use. This problem is especially present among the users who regularly need to transfer larger amounts of data from external memory to a computer and vice versa. Although there are fewer solidly fast USB sticks, users looking for superior performance turn to external SSDs internally using the NVMe interface. Kingston's new SX2000 USB SSD is just such a product, and according to specifications, it is one of the fastest devices of its kind in the world. It is available in a capacity of 512 GB, 1, and 2 TB, and based on the new SMI 2320 controller, which on the one hand has a USB 3.2 Gen 2x2 interface, and on the other connects to the TLC NAND flash in the SSD.

The device is smaller in size, small enough to fit in any pocket. On the side where it has a USB-C connector, it also has one blue LED to indicate the work. In the package with it comes a short and rather rigid USB-C cable and a protective rubber cover that provides ip55 level of protection against dust and water. This roughly means that you can spill water on your device or wet it in your pocket, without fear of losing data.

The SSD interface is also its Achilles heel because the new 20-gigabit USB standard is not very widespread. It's on modern upper-class motherboards, but we haven't seen it yet on laptops where USB-C ports are usually 5-gigabit or 10-gigabit. Of course, for more expensive laptops, behind the USB-C connector there is actually a Thunderbolt 3, that is, more recently, a Thunderbolt 4 controller, so it sets which speed the SX2000 can use on these ports. Although both versions of Thunderbolt could in theory support 20-gigabit USB, for certification it is enough to support 10-gigabit, and this is exactly what our experience from practice is. We tried the XS2000 on two laptops, one older with Thunderbolt 3, the other newer with Thunderbolt 4, and in both cases, the performance of the tested SSD was limited by a 10-gigabit interface.

Alternatively, Kingston could have produced a more expensive device with a built-in Thunderbolt controller, but which would have been significantly less universally compatible. It would work exclusively with computers that have Thunderbolt, but not those with USB. When connected to a USB 3.2 Gen 2x2 connector, the 1-terabyte XS2000 we tried breathes to the fullest and writes and reads at a speed of about 2,000 MB/s, which is also the maximum interface itself. It should be emphasized that both the smaller and larger models also have the same performance. Kingston offers a 5-year warranty on its SSD, and its price is actually very favorable given the competition. For example, the 1TB San Disk Extreme V2, a similar device, costs 50 percent more and offers half the performance. Accordingly, if you need a really fast external USB, or USB memory, the XS2000 imposes itself as a great choice, even if we ignore the low prevalence of USB 3.2 Gen 2x2 ports.