The collaboration between Girard-Perregaux and Aston Martin, announced in early 2021, has become a true friendship between the two brands, as it has resulted in the creation of a new watch: the Laureato Chronograph Aston Martin Edition. 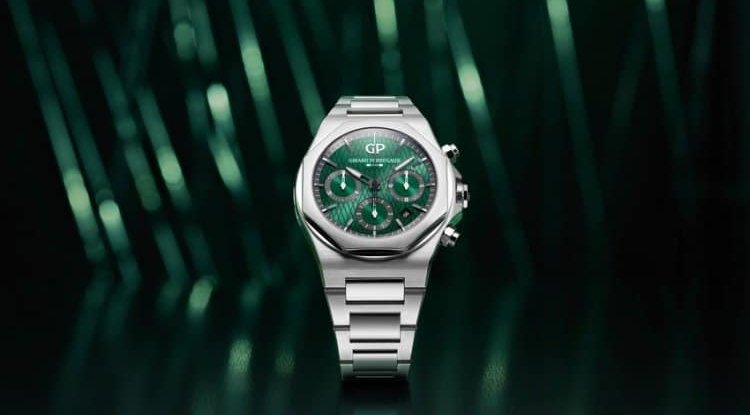 The collaboration between Girard-Perregaux and Aston Martin, announced in early 2021, has become a true friendship between the two brands, as it has resulted in the creation of a new watch: the Laureato Chronograph Aston Martin Edition. A watch conceived for those who appreciate luxury and performance, which combines wonderfully with shapes, textures, and light. Both companies have more than 330 years of knowledge and tradition, a legacy that is easily discernible when examining the creations of both firms. And yet, despite the deep respect they both have for their history, they also share a decidedly avant-garde look.

At the beginning of the 20th century, in car racing, different colors were assigned to vehicles to distinguish the nationality of each team. In this way, the French cars stood out for their blue color, the Italians were known for their red color, the Belgians for the yellow, the Germans for the silver tonality, and the British wore British Racing Green. As a British brand, Aston Martin also adopted green as a racing color, its most famous representative being the Aston Martin DBR1, which won the 24 Hours of Le Mans in 1959. From that model to the current Formula 1 car ®, Aston Martin's racing color has remained green.

Laureato Chronograph Edition Aston Martin is the latest Girard-Perregaux piece, the fruit of a collaboration with Aston Martin Lagonda. Its dial is colored in a specific color, known today as 'Aston Martin Green', which is only achieved after painstakingly applying the paint twenty-one times, a process that results in the creation of seven layers of paint. But this is not its only influence from the world of motoring, as it also incorporates a cross-shaped shading, a design with diamonds that was first featured in Aston Martin's 'AM' logos between 1921 and 1926, and which was inspired in the padded seats of many of the vehicles of the British car brand.

According to Patrick Pruniaux, CEO of Girard-Perregaux: "Our creations have a long history of collaborations, the first of them all launched by our founder, Jean-François Bautte, who brought together different établisseurs under the same roof and thus created the first creation as we understand them today. Our collaboration with Aston Martin has not only resulted in two exceptional timepieces, but it has also sparked a real exchange of ideas and created a relationship between the two brands and our teams. Laureato Chronograph Aston Martin Edition highlights this mutual understanding and philosophy of life shared by both brands. "

Marek Reichman, Aston Martin Executive Vice President, and Chief Creative Officer adds that: "The partnership between Aston Martin and Girard-Perregaux grows stronger with each passing day and so does the ethics that we both apply to design, focused on understated luxury. Proof of this are the subtle details of the watch, such as its hour and minute hands, partially pierced and designed as a tribute to car racing and the elimination of unnecessary materials in order to have the best performance. Similarly, the central chronograph second hand incorporates a counterweight that evokes the side finials featured on the 1958 Aston Martin DB4. "

The dial is adorned by three counters, two chronograph registers, and a window for the small second hand. All counters have a partially pierced hand, which gives continuity to the design of the hour and minute hands. The center section of all counters features a shell design. The functions of the watch are completed by a date window at 04:30.

Tribute to the myth of 75

With its octagonal bezel, this model pays homage to the House's iconic 1975 watch: the Laureato. The case, in a display of Girard-Perregaux's most characteristic design, masterfully plays with different shapes and finishes. And so, the alliance between its many curves, facets, and lines and its satin and polished edges creates a wonderful play of light.

A sapphire crystal panel on the back of the watch reveals the in-house self-made automatic movement, the Caliber GP03300-0141, the first time a Laureato Chronograph has been fitted with an open back. This movement, which is based on the esteemed Caliber GP03300, features a straight and circular Côtes de Genève finish, polished depressions, blue chrome screws, and a pearl finish. The movement also features the eagle emblem, indicating that it is a self-made caliber.

The watch is housed in a 42mm 904L steel case. This particular grade of steel is less common than 316L and also more expensive, although it offers higher resistance to corrosion and scratches and a much brighter, more luxurious appearance. The bracelet also uses 904L steel, embellished with a satin finish.

When examining the design of the Aston Martin Edition Laureato Chronograph, a wide array of shapes, finishes, and hues can be seen in its profile. A design with functionality and beauty that pays homage to the past, but also moves towards the future. This approach is a perfect fit for both companies and reinforces the rationale behind the alliance forged between these two prestigious brands.