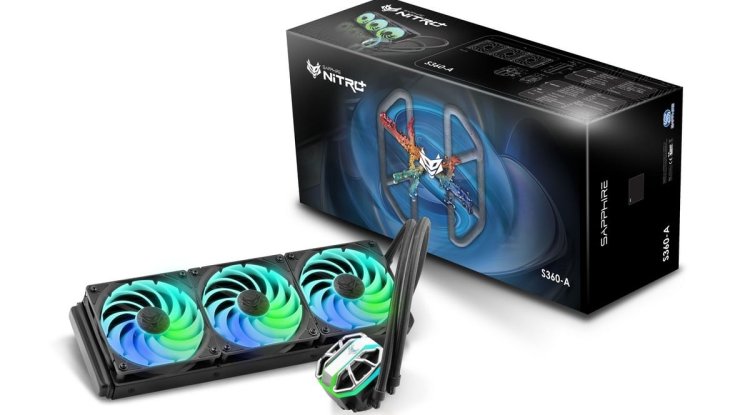 Sapphire today announced a new line of all-in-one liquid CPU coolers, moving from the graphics card segment to processor cooling for the first time. It should be noted that it is not the first liquid cooling of Sapphire as such, since some of its graphics cards arrive with a cooling system of this type.

In any case, we find two variants in this NITRO + cooling line, with a model equipped with a 240mm radiator and another equipped with a 360mm radiator. As expected, an Asetek design combination pump is used, where in its seventh generation it integrates a temperature sensor that adjusts the speed of the water pump according to the temperature of the fluid.

For its part, the fans, with double ball bearings, 13 blades, and a design based on what can be found in the company's graphics cards, have ARGB lighting, something that the cooling block also has. Its speeds range between 450RPM and 2500RPM, while, in the case of the water pump, it will operate at speeds between 800 and 2800RPM.

For now, the price of these cooler kits is unknown, which will be compatible with the latest sockets on the market, such as the LGA 1700, LGA 1200, and AM4.

Intel will equip Alder Lake with new coolers – that was already suspected in September when the first indications were given. The concept of the laminar cooler is reminiscent of AMD, in that it also offers something for the eye.

The rumor mill had already rumored some time ago that there will be new standard coolers from Intel at Alder Lake and they have now also leaked as an apparently final product image. The coolers apparently called Laminar are not included with the current K processors (“boxed without cooler”), as they are already available in the form of three models.