The South Korean start-up company FADU has announced the development of its first SSD controller for PCI-Express 5.0. A read rate of 14.6 GB / s, a write rate of 10.4 GB / s and up to 3.4 million IOPS are targeted. The target group, however, are server customers. 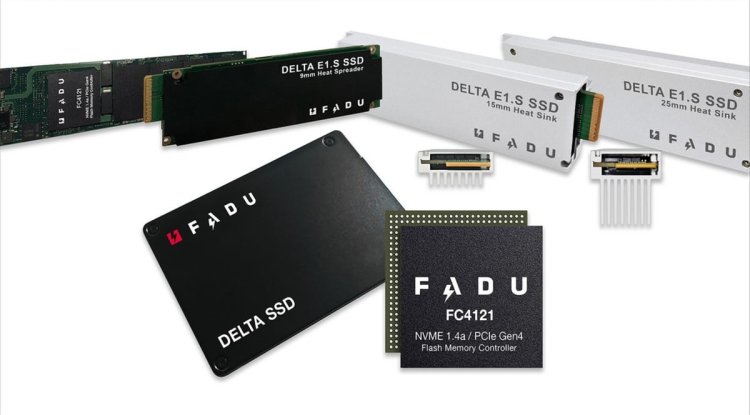 At the Open Compute Global Summit, the South Korean start-up company FADU announced the development of an SSD controller for PCI-Express 5.0. According to the preliminary specifications, the FC5161 controller should enable SSDs with a read rate of 14.6 GB / s and a write rate of 10.4 GB / s. Reading also promises 3.4 million IOPS, while writing is still a very high 735,000 IOPS. The FC5161 is to send 16 NAND channels into the race, with which it supports the NAND interface ONFi 5 with 2,400 MT / s: Corresponding NAND flash does not yet exist on the market.

NVMe 1.4a and the OCP Cloud Spec 2.0 are also already on board with the FC5161. The South Koreans see the key to success in TDP management - due to their high power consumption, conventional architectural approaches are often at the end of a generation change. The controllers would get too hot, throttle, and immediately nullify the advantage gained. However, FADU estimates the thermal design power of the FC5161 to be less than 5.2 watts, which seems quite moderate.

In addition to controllers, the start-up also supplies entire SSD designs. Since FADU develops its hardware for server applications, the SSDs appear in the new E1.S, E3, and E1.L server form factors. The South Koreans also have an eye on the U.2 format. FADU is "fabless" itself, so it does not have its own production.

It is not yet clear when the FC5161 or SSDs equipped with it will come onto the market. Incidentally, Samsung announced in July that it would bring the first server SSDs with PCIe 5.0 onto the market in 2022. Marvell had already announced a PCIe 5.0 controller for SSDs in May.