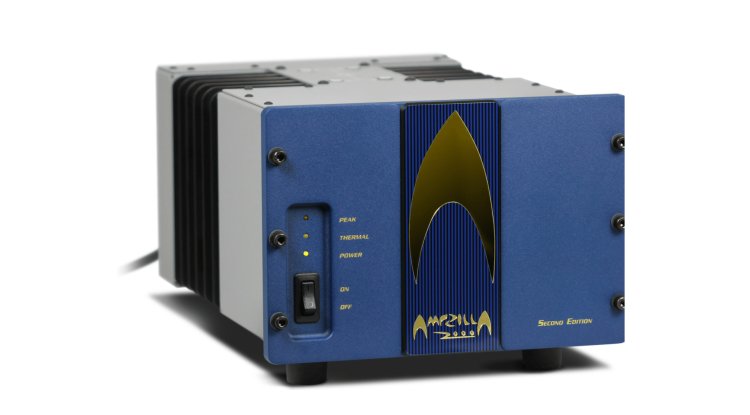 The Legacy of Bongiorno - James Bongiorno, the man behind such hi-fi legends as Ampzilla, GAS Thaedra, SUMO The Power, and SAE XXX1B, left behind more than simply the DC servo circuit and the perfectly balanced bridge amplifier. STEREO had the opportunity to review the second version of his pre/power amp combo Ambrosia and Ampzilla 2000 exclusively.

Reading the following will make every hi-fi fan's mouth water. Marantz, Dynaco, Harman, Constellation Audio, and SST – share the fact that a certain James Bongiorno was the chief developer.

The Italian-American, as intelligent as narcissistic and recognized for his blunt style of communication, regrettably passed away in 2013. He did, however, leave behind the current project, which was completed to the last screw and soldering point. It is based on the first version, which was released in 2005, and has been polished rather than revolutionized.

It's evident that the "Ampzilla 2000" alludes to the super amplifier that was first provided as a construction kit for Popular Electronics – Bongiorno's best-known product. It also caused him to have a falling out with SAE, the high-end firm for which he was creating top-of-the-line amplifiers at the time.

The emblem on the current SST amplifiers is more than a passing resemblance to the Enterprise logo; it represents the "Final Frontier" as well as the manufacturer "Spread Spectrum Technologies." Of course, these are Class A/B amplifiers with transistor technology, despite the fact that Bongiorno has preferred tubes since his Marantz days – in contrast to MOS-FETs or Class D, by the way.

Of course, the power listed on the fact sheet already guarantees a sly grin on the face. It is stated to be 300 watts sine into 8 ohms and 540 watts into 4 ohms, with the monoblock being almost insensitive to phase and 1 ohm steady. Finally, we detected 390 and 680 watts, and the fuses broke when we tried to determine the pulse power above 700 watts. As a result, the potential consumer receives over 30% "more" than planned.

A dozen 250-watt bipolar high-power transistors, 100,000 microfarads of filter capacity, and a 2000 VA transformer are used to do this — per monoblock, of course. Aside from the massive heat sinks, the heart of this completely balanced amplifier block is essentially a single card-shaped circuit board that also houses the connectors.

The gain of the accompanying preamp Ambrosia – which means "meal of the gods" or "heavenly bread" – is only around six decibels in the "Low Gain" configuration, which enhances signal-to-noise ratios among other things. This is claimed to have been a request from Japanese fans, who frequently use incredibly efficient speakers. Because of Ampzilla's immense power, reaching full output may be challenging. If you prefer to utilize ordinary to low-efficiency speakers, SST offers an alternative gain option of around 20 dB, which can be adjusted through a jumper inside the preamp. Its noise properties are also rather good.

In general, a sophisticated circuit architecture based on Analog Devices' JFETs and operational amplifiers AD797 assures low levels of distortion and noise in the preamplifier – hardly surprising. After all, Bongiorno was not only always up to date but was frequently ahead of his time. As his slogan goes, "everything is significant; what matters is the blend and the performance."

The preamp sections Phono-MC, -MM, Line (high level), and display control are powered by four separate transformer windings inside the Ambrosia. In addition, there are 15 independent voltage control circuits. The entire working interface of the completely balanced preamp, which is equipped with an intricate distortion-preventing circuit and is lighted by ample LEDs, is electronically and galvanically isolated from the remainder.

The control menu contains eleven programmable CMOS circuits, each with 16 analog switches. Individualization of the Ambrosia is possible via the front panel or the remote, for example, by modifying the tone control or low-cut filtering.

Regardless of its historical forefathers, the devices are modern and outfitted with a variety of defensive elements. Nonetheless, they are so overloaded that the manufacturer recommends short-circuiting unneeded preamp inputs for peak sonic and measurement performance. Not to mention that directly unplugging the power amplifiers voids any warranty - so be cautious and always use the delaying power switches.

Since SUMO, Bongiorno power amplifiers have been the completely balanced bridge amplifier kind. As a result, each monoblock has two (stereo versions four) full power amps, one for the upper and one for the bottom half-wave of the signal. Instead of conventional grounding, both "poles" are hot and equal in proportion to the connected load, the loudspeaker. It's worth noting that no traditional ground contact is made, not really even when measuring.

While this "floating ground" created a sensation in SUMO The Power, several top-tier amplifier ideas since then have relied on Bongiorno's fully balanced bridge amplifier approach. It is now impossible to envision amplifier technology without it, leading the master to make statements like "that not many new things have truly happened in the amplifier world since then."

According to him, the same was true for servo technology in preamplifiers, which kept the DC current under control, i.e. drift-free and out of the signal path. We do, in fact, owe this concept to James Bongiorno. The Italian-American, as is widely known, had a very high opinion of himself. Until the Ambrosia, he considered his Thaedra preamplifier (from 1976) to be the ultimate standard, dismissing his own later SUMO preamps.

Indeed, a Thaedra still sounds amazing, although it does produce slightly more noise when compared to more modern preamplifiers.

The "Trio 2000" here is not only the definitive end of James Bongiorno's creative output, but it is also the end of the line in amplifier construction right now. It's even better than his hi-fi classics. And, considering the price, it's a steal.