A mouse that does not look striking at first glance is actually full of functionality for the most demanding users, something like Clark Kent and Superman. 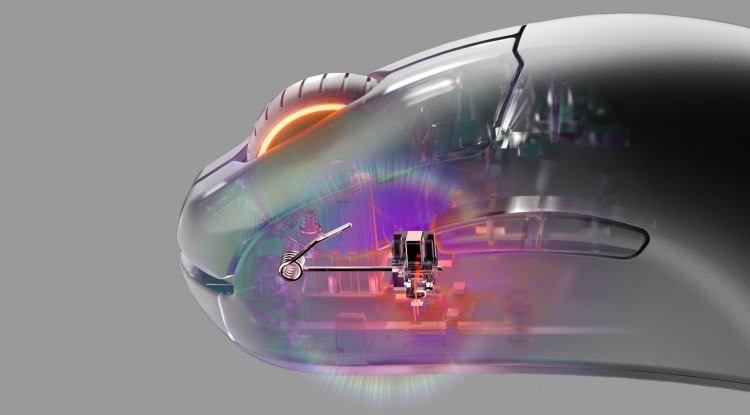 A mouse that does not look striking at first glance, is actually full of functionality for the most demanding users.

The huge competition in the market for gaming mice means that it is very difficult to stand out from the competition. For this reason, manufacturers often invent unusually designed devices with strange functionalities, and their small format is probably the only reason why we have not yet seen a mouse with a built-in cup holder. That is why we were stunned by the SteelSeries' Prime+ model, which looks very inconspicuous but offers much more than can be implied from such a subtle exterior.

Just as Clark Kent looks like an ordinary journalist, so Prime+ at first glance looks like the most ordinary office mouse. Its rounded and slightly asymmetrical shape lies well in the hand and easily adapts to various holding styles. The black case and the five keys are standard equipment, and the barely visible logo and discreet light around the wheel are the only indications that it is a mouse designed for a slightly pickier audience than those who just need something to fill tables in Excel. However, when Prime+ is turned on the back, a tiny OLED screen and a button to change the profile are revealed. To manage profiles, you need to install the SteelSeries GG software, which manages all the company's devices. In addition to the huge amount of options, such as DPI rigging and polling rate, software can also be managed in detail by accelerating and slowing down and being sensitive to changes in the direction and height of the mouse from the substrate. Of course, such precise calibrations also require an extremely precise "eye", and Prime+ comes equipped with an impressive optical sensor that registers up to 18,000 DPIs, and a secondary sensor that can register minimal height changes and mouse lift from the base.

Below the left button on the mouse there is a mechanical switch, similar to those that you can find on the keyboards. It allows for a very responsive and consistent activation of the button that is by far the most used in the mouse, which is certainly a desirable characteristic for competitive play, but also means that the clicking sound is a little more penetrating and louder than usual.

With a mouse of such refined capabilities, it is actually incomprehensible that it is not possible to control profiles directly through the keys located under the fingers. The only way to change the settings is to turn the mouse and press the key next to the OLED screen. The screen will inform the user about the change of profile, but since it is located at the bottom of the device, it is not exactly in the most practical place.

The rationale for such a minimalist design is predictable: this is not a mouse whose performance you will constantly modify, but is intended for those who know exactly what they want. Professional and amateur e-athletes come to mind as a good example. Such users need a highly customizable device, but without unnecessary accessories. Once they set up their mouse profile, they need nothing more than a precision sensor and shot buttons.

The peppery price of this mouse is hard to ignore, especially considering that SteelSeries also offers a more basic variant of Prime, which comes without AN OLED screen but costs about 30 dollars less.

We used MouseTester software to test mice. This software allows us to find any flaws in the communication of the mouse with the computer that could cause us to have problems in games. We focus on reading rapid shifts, stability of connection to the computer and potential precision problems that manifest through jittering and artificial alignment of cursors.

Prime+ has shown exceptional stability and consistency in communication with the computer, with rare and negligible anomalies that will not be felt in use. We expected nothing less since it is a mouse that communicates with the computer via cable, and not a wireless model.

Modern sensors can most often detect speeds much higher than those that can be achieved by mere mortals like us, who rarely exceed the value of 3.5 m/s in our tests.

The motion test did not offer perfect results because we recorded a certain scattering of values, but average values show stable movement without noticeable imprecision. It should also be mentioned that this test measures only the linear precision of the sensor, its movement along one axis and does not take into account the performance of the secondary sensor that will help neutralize mouse oscillations when minimally lifting from the substrate. In this sense, linear precision is not perfect compared to the best copies in the class, but it is supported by software.

Similar to speed, modern sensors are capable of tracking much higher accelerations than human hand can achieve. Very smooth and consistent value recording proves that there is no shortage of information when moving the mouse and that the movement is recorded consistently from start to finish.

The so-called Paint Test allows us to check the presence of jittering and find out if the mouse uses artificial motion smoothing. These two things, when present, negatively affect precision, which especially bothers during the playing of strategic and shooting games in which precise and fast forwards have the greatest value. Jittering manifests itself through extremely irregular and humpback lines, while smoothing (artificial smoothing) is recognized by perfectly straight lines that act as if we drew them with the help of a ruler.

By drawing with a free hand, we can see how, in smaller DPI settings, Prime+ outlines the actual movement on the background. Artificial smoothing is not visible at any time, while only in the highest defaults can the presence of jittering be observed. This can also be largely offset through calibration in the steelseries GG software mentioned above, so it does not represent a significant drawback and shows that it is a device with great potential, if you have the time and will to deal with detail and fine tuning. On the other hand, a large number of users are unlikely to use the mouse on settings above 6,000 DPI, so they will not even have the need to do so.

This mouse is packed with functionalities that are not often seen on mice of such a discreet design. However, all these additional functionalities are hidden on the underside of the mouse, or they are dependent on complex and somewhat bulky software, which is not always practical to install on every device you use. It's not bad to be discreet and inconspicuous, but not everyone will want Clark Kent who never takes off his glasses.

If every wish had come true for Tarantino, the cast of "Pulp Fiction" ...