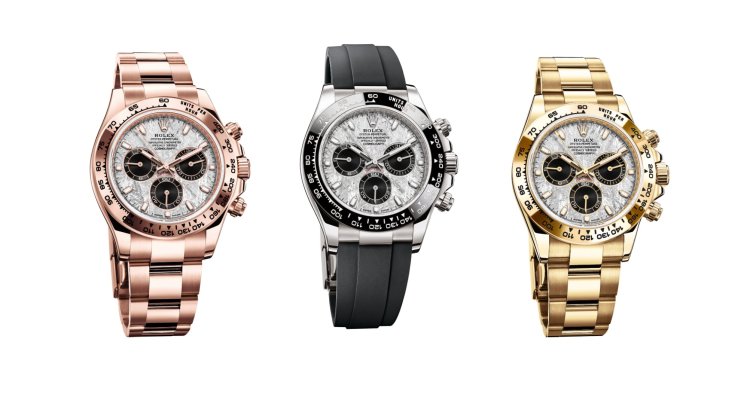 Rolex launches new versions of the iconic 'Daytona' with the meteorite dial. There are three models in gold. Two versions in yellow gold and Everose gold with bezel and bracelet in the same material, plus the declination in white gold with Oysterflex bracelet and Cerachrom bezel, for a more sporty look.

Who does not already know the Daytona, one of the most desired watches in the industry? But these come from another world. The King Chronograph features three new modes with galactic dials. Coming from outer space, Rolex has crafted three very special dials with a meteorite and metallic finish. Made with the latest technological tools from the Geneva firm's savoir-faire, they keep the chronograph counters in black at 3 o'clock, 6 o'clock, and 9 o'clock. Marked contrast that plays with the special texture provided by the use of the meteorite in the spheres.

As we know, each meteorite comes from the heart of an asteroid, which may even be part of a planet whose explosion pushed it thousands of kilometers to our planet. The natural pattern of each meteorite is unrepeatable. So the natural design of each of these faces makes each Daytona even more coveted. A distinctive aesthetic touch that, in fact, makes them unique. Rolex launches three versions in gold. The white gold piece looks more sporty thanks to its Oysterflex bracelet and the one-piece Cerachrom bezel with the tachymeter scale.

The other two pieces are presented in Everose gold and yellow gold with a more classic touch. These new Daytona's are powered by the in-house chronograph caliber 4130. The latest technology incorporates the Parachrom blue paramagnetic coil, a precise mechanical device that offers resistance to shocks and against temperature variations. Self-winding powered by the bidirectional Perpetual rotor, the caliber can run for approximately 72 hours.

A robust watch thanks to the Oyster architecture with a one-piece case and screw-down case back and crown - this one with its triple-waterproof Triplock system. All pieces are guaranteed by the already recognized Rolex Green Seal. They are Superlative Chronometer, a certification that adds the COSC seal plus the firm's own certification after the assembly of each of these Rolex Daytona meteorites.