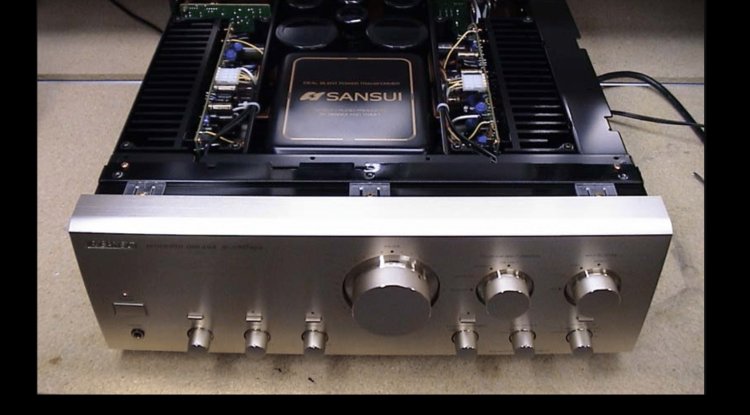 The Ultimate alpha-X balance circuitry was used in the Integrated Amplifier.

The current margin of the driver stage was enlarged twice in the past by the Ultimate alpha-X balancing circuits, and it was deemed as first-class operation, and dynamic behavior and the formation of wide-range high speed excellent in all the transmit / amplification it1s are realized.

A final stage converts a talk stream composition into a single drive balance push-pull, carries NM-LAPT of Pc (collector loss) 200W suitable for the large power amplification which was used for the power amplifier B-2302, is that the electric-current margin improves during a real operation, and enables the outstanding play.

As a power source, a 13kg total weight power transformer is used. By enclosing a high-density fill, the oscillation during an operation is reduced, and the stable supply capacity of an electric current is raised to the interior of a quadruplicate structure's shielding.

Furthermore, it has a structure in which an oscillation of a power supply system does not cross to a chassis, with a mechanical floating scheme that carried out the floating of a power transformer mounting from the chassis.

The occurrence of the oscillation is reduced to a bare minimum by using a new model-like radiator.

Furthermore, what reduces an oscillation and a resonance for three splitting bonnets containing new model-like copper powder is newly made, and it also has a very strong structure to the oscillation by constructing a floating mounting sub-wood embedding a pure-copper board.

As an insulator, a pure-copper elliptical insulator of leather is used, which has excellent periodic-damping properties.

As a power supply, the alpha-X balancing power source is used.

It has a closed-loop composition with complete independence from grounding, which created the output stage the balanced type closing, and it used the first rank as the upper-limit symmetrical balance type constant current type power source, and the transformer sub-side also made another coil.

Non-magnetic-materializing, low-impedance, and vibration-proofing are implemented among the parts utilized as the point that determines tone quality, and it is in the transmission channel of a music signal.

The highest level thing developed in the VINTAGE series of SANSUI is employed, such as a capacitor film capacitor, a resistor, etc. of a golden plating bar.

Furthermore, for a speaker termination, the OFC composition and the 24k hardening gilded termination produced from German WBT with negligible signal losses are used, and the banana plug is also supported.

Furthermore, the aluminum Naked shaving appearance is used as a volume knob.

The signal connected to three direct inputs is routed through a power amplifier section without passing through a preamplifier part.
In addition, the balanced input terminal is included.

Both the MC-man month cartridge and the phone equalizer are carried.

The bass-treble range is 6.0dB, and stepless tone synchronization is available.

The Detent volume of 6 units is carried.