Really impressive, and Apple achieves all this by using as many as 6 external and 2 internal microphones, with processing by Apple H1 processor... 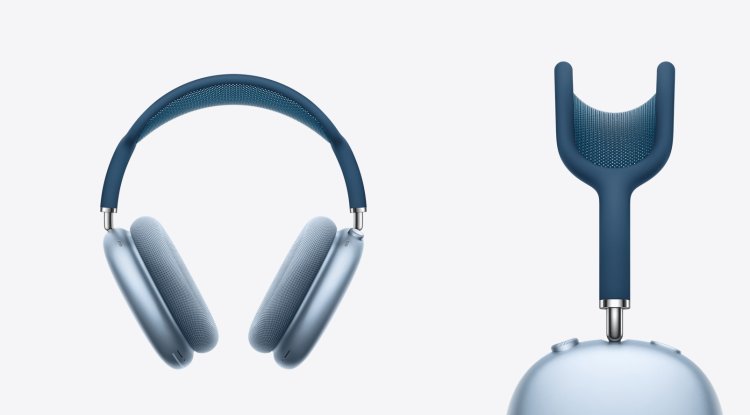 Characteristics and impressions in the work

The look is completely in the design language of Apple and it is simply impossible to mix them with any other manufacturer, although you will not find the famous apple anywhere outside. This is mostly due to the baskets of the headphones themselves, which are made of metal, or most likely some alloys of magnesium and aluminum, with a rectangular shape and rounded edges such as. Apple Watch, which headphones make about 100g heavier than on most similar models.

The most innovative solution is certainly the headphone frame, which is traditionally the most sensitive point of all headphones, but also a critical thing for comfort and longevity. In this case, it is made of elastic metal covered with soft rubber, which is very pleasant to the touch, while in the central part there is a tight mesh made of fabric, which rests on the head from the top. The seemingly simple, but very effective and comfortable solution, although the question arises about the longevity of the network, which is also the only sensitive part of the whole headset.

What is mostly the weakest point of all headphones, and that is the connection between the frame and the basket, is masterfully executed on this model, so the steel profile practically enters the joint which provides slight resistance with a spring that helps the headset lie on its head. The size adjustment is solved like a shock absorber, so the steel profile is pulled out of the frame with a stroke of about 2.5 cm on each side, with a very precise stroke and firmly remaining in the position where you leave it.

If the network, which is otherwise very elastic, proves to be durable, Apple Airpods Max should be extremely long-lasting, even if you often carry it with you, which is one of their purposes. Accordingly, you can turn both baskets 90 degrees and place the headphones in a specially designed case, which is not typical for Apple, and which, with a slightly silly look, protects the baskets and the mechanism, but not the headphone frame.

As for the fine details, there are microphone holes on both headphone baskets, which we will talk about later, on the left there is an antenna line at the bottom edge, while on the right there is a Lightning charging port, charging or pairing indication diode. as well as a button to change the mode and Digital Crown as on the Apple Watch which serves for fine control of volume, skipping songs and more through rotation, pressure or double pressure.

We have already said that the comfort on the head is at an exceptional level, both because of the design of the mechanism and the frame, and because of the cushions that are covered with fabric and most likely filled with a sponge.

Apple didn’t miss the opportunity to innovate here either, so the pads are not only removable for washing, but they are made as an independent part that attaches to the handset with a magnet, so you can take it off and wash it by hand or machine, which is really great , and far more practical than mastering with studio models, to which most users would not be accustomed.

Of course, as this is Apple, you can also buy a replacement pair for $70. The depth of the insert is considerable, it seems solidly larger than usual, which leaves a lot of space for the ear to breathe, but it probably also helps to spread the sound inside the headset.

The first thing you will notice when you put the headphones on your head is the insulation, which is impressive to say the least. Although at first, we thought it was an unrealistically good passive insulation, since the headphones have not yet been paired with a device, it’s still a bit of Apple magic, because the headphones activate as soon as you put them on your head, and with the active noise reduction. It’s probably the best solution of its kind, better than what we’ve heard on in-ear models, which completely eliminates low frequencies coming from the outside and leaves very little sound that sounds like a small radio transistor from a remote room. Also, with the mentioned button on the upper side, you can switch between the noise reduction mode and the ambient mode, in which you can hear everything around you practically as if you are not wearing headphones, in full stereo mode.

Really impressive, and Apple achieves all this by using as many as 6 external and 2 internal microphones, with processing by Apple H1 processor that processes data from all microphones in real-time and adjusts the content and frequency response of what reaches your ear. When it comes to the microphone, perhaps the only thing that does not delight and from which we expected more is the quality of the main microphone that will be used for conversations, although the reduction of ambient noise is quite good.

In terms of sound, frequency response, these are headphones with probably the best bass response we’ve heard so far, because not only is it extremely low, maybe even slightly below 20Hz, but it also has a fairly flat response, without a large drop in strength, as well as a very low level of harmonic distortion and virtually zero distortion caused by vibration of the structure, which is a regular occurrence in most models. What is good is that the bass is not excessive, but it may be only slightly more present, but with excellent low-frequency transients, which makes drums, explosions and all other sounds with a low-frequency content sound very convincing and powerful.

As the bass does not mask the rest of the spectrum, the mid and treble tones are very clear, with a lot of detail, and the sound image is especially impressive and is one of the best we have heard so far on a pair of headphones. The sound image and level of detail make it easy to see every instrument in the song, even fine details in games such as steps, for example, with an impression that is close to listening on speakers, not on headphones with two separate ears and nothing in the middle.

While the frequency balance and refinement of the sound isn’t exactly on a par with top studio models on a good DAC or sound card, what Apple Airpods Max provides in the sound domain is impressive and probably only the most discerning audiophile would have any objections to the sound.

On the other hand, unlike top audiophile and studio models, Airpods Max also offers wireless operation via Bluetooth, with complete freedom and easy connection to various devices, from computers, phones, TVs, so you can use them for virtually anything and in any situation and place.

Users of Apple products with the highest level of integration will certainly benefit the most, as expected in the Apple ecosystem, although we have tested the headphones on Android phones on which they also worked flawlessly and we must mention, with very low latency that makes it great for watching videos or movies as well. Users of non-Apple products will be deprived of Siri integration, as well as surround sound reserved only for Apple devices, which is another well-designed thing, because the headphones use data from the accelerometer to affect the sound image with a slight movement of the head, thus creating a better impression of spaciousness. However, given the popularity of Apple products, it is not impossible that some manufacturers to add support for these headphones and take advantage of these surrounding features, first of all, we think of those from the TV world.

Finally, let’s mention the battery, which is declared for about 20 hours of listening, with active noise reduction, and charging for 5 minutes allows an hour and a half of listening.

We have already said, the headphones are always active unless you put them in the case or if they are not used for two hours, in which case they go into ultra ‑ low ‑ power mode, so it is certainly advisable to use a not very practical case when not using them. To save battery.

In total, with this model, Apple managed to give the wireless headphone market its own stamp and offer some interesting innovations in its own style, do something better and simply offer a very good product.