With the Prime series, Asus covers the lower and middle segments of its offer, although there is a slight overlap with ROG boards. 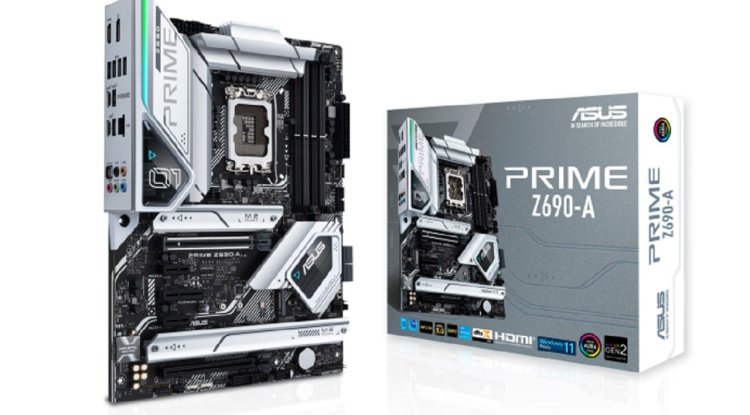 With the Prime series, Asus covers the lower and middle segments of its offer, although there is a slight overlap with ROG boards. Let's see what the Z690-A variant can offer us - the most expensive representatives of the series.

Although it is a board that costs around $ 452, the Prime Z690-A comes with a minimal set of accessories, which consists of two SATA cables and accessories for installing M.2 SSDs. The Prime series is specific for its lighter design, so the metal elements are silver and the plastic ones are mostly white. The upper half of the panel is thus dominated by large aluminum heatsinks mounted over a 16 + 1-phase voltage module, complementary to the decorative white grille that covers the rear connectors and keeps the integrated protective plate in place. There is also unobtrusively integrated RGB lighting, which fills the space between the decorative armor and the larger VRM cooler. The manufacturer does not specify in the documentation and promotional materials how strong peak current can be missed by the elements that make up the voltage unit,

Under high constant load, the temperature of the voltage unit reaches a value of 72 ° C, which is a very good value if we keep in mind that the processor draws up to 265 W of energy from the socket under peak load, with an average of 250 W, which for some unknown reason are slightly better than other tested boards. These are not large differences, but since we see them in most tests, we cannot attribute them to variations within the measurement.

The fan connectors on this board are quite poorly placed. The two primary ones, designed to connect the CPU heatsink, are hidden behind a larger passive on the upper branch of the power module. The other two on the upper half of the board are nested in the corner between the primary M.2 slot heatsink and the heatsink on the VRM module. The cables connected to them are virtually impossible to hide if you are aiming to have a nicely arranged computer interior. We find two more fan connectors on the right and bottom edge of the board - so eight altogether. The board does not have a boot error diagnostic screen, but it has four easy-to-diagnose LEDs, located in the upper right corner of the PCB.

On the right edge of the board are 5 GB USB 3.2 and 10 GB USB-C 3.2 ports, four rotated SATA ports, and a small button to turn on the PC. At the bottom edge are two USB 2.0s, a button to reset the BIOS settings, and a connector for the temperature sensor. The sensor itself does not come with the board, but it is easy to buy it later because it is an ordinary thermistor. This is one of the few boards that does not offer six or eight SATA ports. There is no point in looking at this as a particular minus because SATA ports on modern computers are used less and less, and there is also the factor of shared resources, due to which the use of all M.2 slots on boards implies loss of functionality of one or two SATA ports .

The layout of the PCIe slots is mediocre - we have a main PCIe x16 slot, reinforced with a metal sleeve and connected to a PCIe 5.0 controller in the processor, and four PCIe 3.0 slots connected to the chipset. Two are x1, one physical and electrical x4 and one physical x16, and internally x4. They do not share resources with other ports and they are all usable at the same time. The board also offers four NVMe slots. The primary, connected to the PCIe 4.0 controller in the processor, is located above the first PCIe slot and covered by a simple heatsink. Two NVMe Gen4 slots are placed one after the other above the last PCIe slot and share one long heatsink, and a fourth M.2 slot is placed above them, in the extension of one of the PCIe x1 slots. That slot doesn't have a cooler. Asus is to be commended for installing M.2 SSDs more conveniently than other board manufacturers. The coolers have screws that don’t fall out when unscrewed from the M.2 slots, and the slots have plastic locks to fix the SSDs, so no special screws need to be used.

The offer of external connectors is very good. We have DisplayPort and HDMI for graphics integrated from the processor, four 5GB USB 3.2 ports (highlighted in blue), two 10 GB USB 3.2 ports (highlighted in turquoise), 20 and 10 GB USB-C 3.2, 2.5 GB network connector and five analogs, one digital sound card connector (Realtek's S1220A). Given the price of the board, it's not clear why Asus didn't include a Wi-Fi adapter, especially since the latest versions of the wireless network standard offer great speeds, making them a great alternative to cable, which can often be impractical. Another unusual and negative feature of this board is the lack of support for automatic BIOS upgrades via USB memory.

The Prime Z690-A is without a doubt a quality board, with a very good power unit, which handles the most powerful representative of Alder Lake architecture without any problems. The only problem is that it costs a little too much compared to its capabilities, and the competition in the middle and lower segment of the Z690 board is very fierce.