With this motherboard, Asus targets users who use their computer to create audio, video, and photo content. 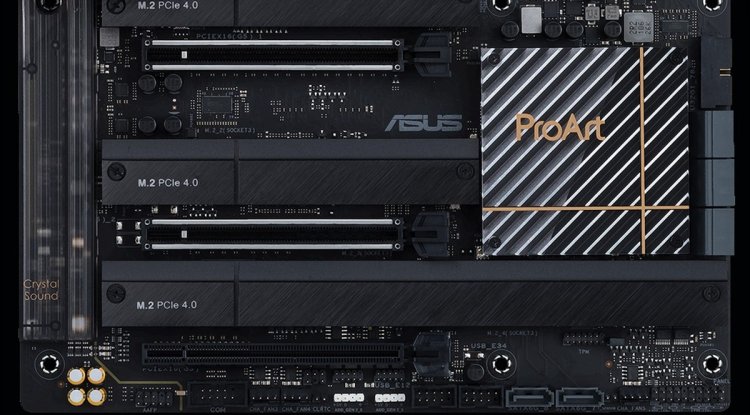 With this motherboard, Asus targets users who use their computer to create audio, video, and photo content. In addition to the unobtrusive design, they therefore adorned this motherboard with the integration of Thunderbolt 4 controllers and excellent network connectivity.

When it comes to the equipment that comes with the board, the Creator model is quite modest. In the box, in addition to the manual and the software DVD, there are four SATA cables, a Wi-Fi antenna, M.2 SSD installation accessories, a DisplayPort cable and a serial number cardboard file for the Asus Control Center Express Edition software. This software allows for more advanced control over certain hardware aspects of the board in the context of business purposes, such as disabling individual USB ports or disabling the use of certain applications. The DisplayPort cable is short and not intended to connect the motherboard to the monitor, but to connect the DisplayPort output of a discrete video card to the DisplayPort input on the board.

The stunt is that this motherboard has a Thunderbolt 4 controller, and this high-performance interface also conducts a DisplayPort signal, which is why in combination with this motherboard we can use monitors with Thunderbolt 4 port. One such is, for example, Apple's Pro Display XDR. In addition to Thunderbolt 4 and two input DisplayPorts, the motherboard on the external connector board also offers HDMI 2.1 output, six 10-gigabit USB ports,a 10-gigabit and 2.5-gigabit network port,two Wi-Fi antenna ports and five analog audio connectors. The S/PDIF optical output of the sound card is missing for some reason, but since few use it, this is not a particular flaw. The sound is taken care of by the older Realtek codec S1220A, which maximizes the support of the 32-bit 192-kilohertz signal, but there are no external amplifiers and DACs available, as is the case on some other boards. Asus must be counting on users who need higher sound quality on this model to connect a serious external sound card, anyway.

The design of the motherboard will appeal to users who do not tolerate RGB lighting, because there is none on this motherboard. They achieved a rather convenient effect by using a blurry semi-transparent plastic to decorate the left edge of the board, and there is a Plexiglas tile with the ProArt logo, placed over the chipset cooler. The voltage unit coolers are medium in size, covering a configuration of 16+1 70-amp phases. The UEFI configuration allows the Core i9 processor to pull up to 264 watts, resulting in vrm heating up to a non-large 64°C. In addition to the 8-pin and 4-pin processor power connectors, the motherboard also has a 6-pin PCIe voltage connector, the purpose of which is to additionally power the front 20-gigabit USB-C port. If this power supply is connecting, the port offers fast charging of the device up to a power of 60 watts.

Asus, on the upper half of the board "played" a little with the placement of the fan. It is not that there are no connectors, but they are set up suboptimally–two are under the lower left corner of the processor bed, and three are on the upper edge of the plate, with one of them placed just above the voltage unit cooler, and therefore difficult to access. It should be noted that the plate around the processor bed has two sets of holes drilled – for LGA-1700 coolers and for older LGA-1200 coolers. Three more fan connectors are located on the lower edge, and there, the motherboard also offers a connector for connecting a thermal probe, two USB 2.0 and two upright SATA connectors. In addition to these upright SATA connectors, there are six rotated SATA connectors on the right edge of the motherboard and one rotated 5-gigabit USB port.

All SATA connectors will function as long as not all M.2 slots are filled. Namely, the last four SATA connectors for connecting to the system use the same resources as the fourth M.2 connector, which, in addition to the M.2 PCIe 4.0 x4 mode, supports the connection of SATA M.2 SSDs. In addition, the motherboard offers three more PCIe 4.0 x4 M.2 connectors–the primary one that is connected to the processor and placed above the first PCIe x16 slot, secondary, which is placed on top of the secondary PCIe x16 slot and connected to the chipset, and the third and fourth slots that are placed in the line one behind the other under the secondary PCIe x16 slot. All four M.2 slots have simple self-contained coolers that ensure contact only on one side. A convenient detail is that coolers are fixed using screws that remain on the cooler when unfolding, so it is not possible to lose them. Asus has also been using a practical swivel mechanism for some time, instead of screws for mounting M.2 SSDs.

The motherboard offers a total of three PCIe x16 slots, with the two upper ones, recognizable by the metal liner, connected to the PCIe 5.0 controller in the processor, while the lower PCIe slot is connected to the PCIe 4.0 controller in the chipset and offers x4 bandwidth rather than x16. When it comes to accessories interesting to enthusiasts, there is a simple boot diagnostic with four LEDs placed in the upper right corner of the motherboard. It is possible to reset the BIOS settings via two pins located at the bottom edge of the motherboard. There is also a small button on the back connector plate, which is used to activate the BIOS Flashback function, that is, automatic bios upgrade over USB memory.

Like the previous ProArt Creator motherboards, the Z690 chipset-based model is designed for a narrow group of users, which primarily needs Thunderbolt 4 functionality on the desktop PC platform. The board also offers support for connecting four M.2 NVMe Gen4 SSDs, a 10-gigabit network card and a very good voltage unit, but compared to other models it is too expensive if you don't need Thunderbolt 4.