Variable refresh is officially supported in the form of AMD Freesync, but the monitor works flawlessly with nVidia graphics cards. 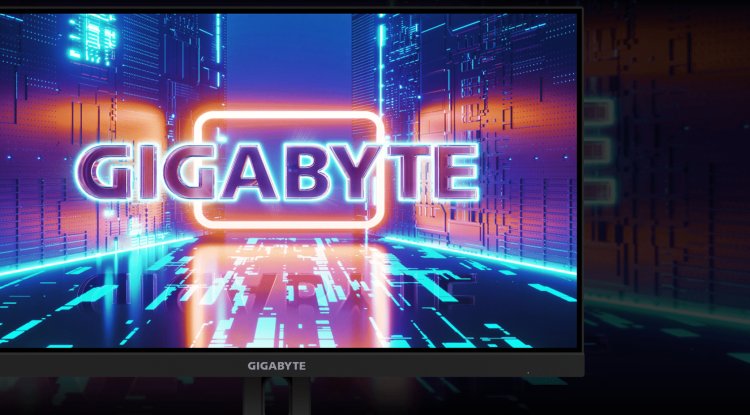 In terms of design, Gigabyte opted for spartan simplicity on this model, but practically without affecting functionality. First of all, we mean the base, which is relatively small in size, with a slightly modified V shape, and which has managed to retain practically all-important ergonomic characteristics. Thus, it is possible to adjust the height in the range of 13 cm, adjust the tilt-up by 20 and down by 5 degrees, so the only thing missing is rotation left and right, which is not necessary due to its small size and easy movement of the monitor. There is even a slot for cable routing, so practically everything that is important for the comfort of use is numbered.

The look of the monitor is simple, completely black and without any colored or shiny details, but Gigabyte skillfully used edges, textures and matte and glossy surfaces to make this simplicity interesting, which is most visible on the stand and back of the monitor. Speaking of the back, there are also connectors in the form of two HDMI 2.0, one Display Port, headphone output (no speakers), as well as one USB 3.0 for connection to a computer and two for connecting additional devices or charging.

The front is in a standard modern style, so the panel surrounds a very thin frame with a few millimeters of extra margin, with a slightly larger bottom skirting that houses only the Gigabyte logo and a small LED to indicate operation.

Simplicity and modern approach are also there when it comes to controls, so on the right side behind the panel there is a mini joystick that also serves to turn on the monitor, so without any additional buttons. It is very clear to us, because all items are on one screen, with three columns and seven rows without additional scrolling, so the setting is very fast and intuitive. Also, moving the joystick out of the menu gives quick access to select the picture and input mode and adjust the headphone volume and Black Equalizer option, and pressing the joystick down gives you a menu to activate the Dashboard showing various system parameters such as temperature, frequency, occupancy, DPI and the like, as well as various Game Assist add-ons such as timers, counters, sights and instant updates.

All this can be adjusted both on the monitor itself, and via OSD Sidekick software in which it is still possible to configure shortcuts, as well as update the monitor firmware, which is still a relatively unusual option for this type of device.

In terms of display, the Gigabyte G24F comes with a 23.8” IPS panel and Full HD resolution, which is a good choice for this diagonal in terms of text sharpness, and less hardware-intensive resolution that makes sense for those opting for a relatively cheaper gaming monitor like this.

It is a panel that achieves eight-bit color rendering with the help of FRC, but it is surprisingly able to display as much as 85.9% of the DCI-P3 spectrum. The color accuracy is correct, although not great, with the best measured Delta E deviation of 3.6 in several different modes, including those adapted to different game genres, as well as watching movies and reading.

The maximum measured illumination of the panel was 291 threads, which is correct for normal use, but of course not enough to justify the HDR support that the manufacturer boasts about, which practically comes down to a slightly wider range of colors. Nevertheless, the panel is quite good for one IPS, with an average slightly lower black level of 0.25 nits and a solid contrast of 1164: 1. It is worth praising the uniformity of lighting and the practical absence of IPS Glow on the tested sample in which respect this is one of the better IPS monitors we saw in the test.

In terms of gaming performance, if you’ve seen our previous tests of the Gigabyte and Aorus models, you’ve probably heard the term SuperSpeed ​​IPS, and the same technology was used this time to achieve a better response.

The natural refresh rate of the panel is 165Hz, but Gigabyte also enabled overclocking, albeit for only 5Mhz, which works perfectly as expected, because it’s not different. But 170Hz is already a solid figure that will allow you to enjoy a great display up to 170 fps in games where your computer can get such a high frame rate. The response of the panel is very good, of course not very realistic 1ms as much as the monitor is declared, but nothing slower than some models declared at 0.5ms - realistically probably 2-3ms with the active variable refresh, which is in the range of better models on the market. What is especially impressive is the way the overdrive panel is set up, so the image is completely clean, without ghosting and overshooting artifacts, which combined with a quick refresh gives a really enjoyable experience of playing fast action games. In addition to fixed overdrive levels, there is also the SMART OD option that dynamically adjusts the overdrive and it works very well.

Variable refresh is officially supported in the form of AMD Freesync, but the monitor works flawlessly with nVidia graphics cards.