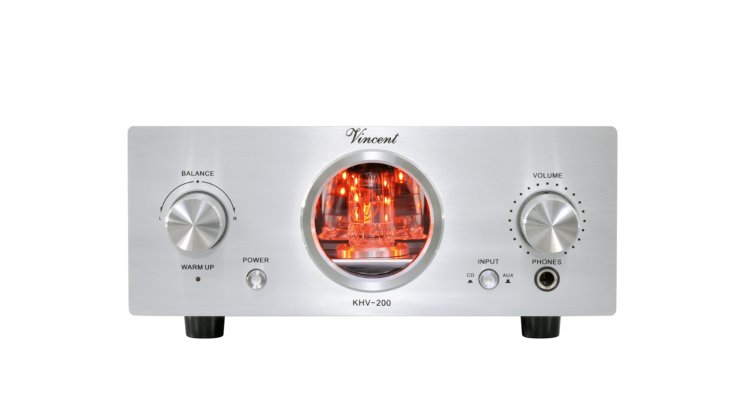 When compared to the much higher pricing of the competitors, this price tag may lead you to believe that the KHV is, after all, deceptive advertising. You can now recline back and relax again, or you can move your upper body forward with curiosity, depending on your character. Vincent, situated in southern Germany, is noted for adding price tags on its items, which might cause concern among competitors.

Furthermore, several current Vincent products bear the signature of one of Germany's most known developers — Frank Blöhbaum. The engineer is a renowned tube expert who has a penchant for creating circuits that were previously thought inappropriate for real use but are great in terms of sound. He has now also assured that the KHV-200's sound quality, practicality, and low price do not contradict each other.

Before we go into the technology, consider what the device has to offer in terms of optical highlights: First and foremost, the narrow width of a little about 21 centimeters comes to mind.

A tube illuminates the centrally located porthole, allowing the device to glow in orange tones with varying intensities, which may be altered in three steps. Switching between two high-level inputs is possible, and volume and balance settings allow for a symmetrical "face." A 6.3-millimeter connection is located below the volume control and can be used to connect the majority of commercially available headphones with impedances ranging from 30 to 600 ohms.

In a different approach, the back panel is pleasantly surprising. Two sets of gold-plated RCA connectors for two high-level sources, for example, stand out, as do the outputs for a recording device and power amp operation.

The KHV-200 is designed not only as a headphone amplifier but also as a preamplifier.

Some preamps and headphone amplifiers mute the pre-out as soon as headphones are plugged in; this is not the case here; both outputs operate concurrently. The advantage is that when the headphones are unplugged, the loudspeakers do not suddenly turn on. This could happen late at night, causing your neighbors to jump out of bed in disbelief.

A "gain" switch is located above the two RCA outputs. This can be used to level differing sensitivity levels of headphones so that the entire volume control range is usable.

Furthermore, we come across a particular feature that is generally seen in the top four-digit price range: the ability to attach headphones via a four-pin balanced connector. That leaves us with the previously mentioned dimmer switch for the tube lighting, two remote power connectors, and a power socket with phase indication.

A look inside reveals that the small amp is not full of "hot air," but rather comes packed with features.

This is for good reason: the higher the impedance of a set of headphones, the more necessary it is that the amplifier knows how to distribute high voltage, whereas a low impedance necessitates that it supplies a strong current. Just as many crucial loudspeakers from Infinity to Apogee used to demand from the amplifiers to which they were connected.

This demonstrates that constructing a universal headphone amplifier, as Frank Blöhbaum intended, is not without challenges.

Particularly when a dynamic range of 120 dB is desired. According to Blöhbaum, this was a particularly specific problem for which he had to devise a few tactics not present in standard textbooks, all the way up to the point when the volume control participates in the action.

The amp uses selected frame grid pentodes in a triode circuit for voltage amplification. Its entirely analog, adjustment-free system assures that the tube never departs its proper operating range for its entire lifetime. The KHV achieves an amplification of about 10,000 times with outstanding linearity thanks to a specific current source circuit.

Furthermore, the circuitry is constructed so that only harmonic distortion occurs. Powerful negative feedback can be applied due to the simultaneously obtained greatest bandwidth. However, as could scarcely be predicted, this is built in such a way that the sonic disadvantages that are frequently correctly attributed to negative feedback do not occur here.

As a result, a great deal of thought and effort went into the creation of this product. In terms of appearance and craftsmanship, it appears robust, but generally less stunning than what technology and sound have to offer.

The KHV-200 not only adds to the market by providing a new option; the Vincent also emerges with its head held high after bouts against opponents who were much more expensive at times. Magnificent!