The Infinix Note 11 Pro also comes with this chipset that the manufacturer will try to introduce to you as an Ultra Gaming Processor. 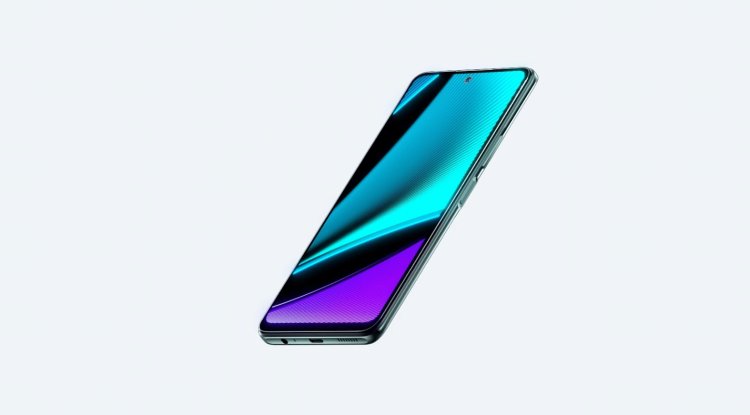 A really huge display 6.95" that Infinix called Ultra Fluid Display, probably aimed at refreshing the 120Hz display: in terms of display quality, one standard mid-range IPS screen packed in a plastic frame with a plastic back of the device - in our case Haze Green, likable a variant that does not leave fingerprints because of the specific texture of the back of the phone. And the box of the Infinix Note 11 Pro model is also green, and besides the 33W charger, it also contains a silicone case if you want to additionally protect your phone. Although this is a classic example of a device that may not need an additional case - let’s mention that it is there. 209 grams is the weight of this phone, as expected, considering the dimensions, but it is not so terrible to hold in your hand, unusual but it is so. With one hand, you will hardly be able to do anything.

The fingerprint sensor is in the power button and above it are the volume buttons: opposite them is a drawer for two SIM cards and an additional micro SD slot. We don’t find any openings, slots, connections on the upper, flat surface ... but on the lower, also flat side of the phone, there is a 3.5mm connector, a microphone hole, a USB Type C port and a speaker grille. The role of the second speaker is taken over by the handset of the phone, and to be honest, you can see the effort of the manufacturer not to fall for small things: the only thing that can be noticed is the absence of NFC connectivity.

On the back of the phone, there is a camera system that, from the designer’s point of view, gives the impression that there are more cameras than there really are: but we have to admit that the manufacturer did it very, very solidly. In general, we had countless phones from much better-known manufacturers in the test, but also significantly worse in design than the Infinix Note 11 Pro.

If you visit the Infinix site to find some additional information about this phone, you will be pleasantly surprised by the amount of information, some of which is a bit unfair to say exaggerated, but overemphasized would be a real statement. But understandably, since the manufacturer does not shoot at the segment of expensive phones, it is understandable that they are proud of the best offshoot in their offer, so they somehow talk about every detail of the phone. For the effort to present some very common features, a pure ten.

The Infinix Note 11 Pro also comes with this chipset that the manufacturer will try to introduce to you as an Ultra Gaming Processor. Of course, this is not the case, this chipset is far from gaming-oriented, but for a user whose appetites are not too big, it is not a bad solution at all. Infinix’s trump card offers a very nice 8GB of RAM and 128GB of data space and is much more generous in this regard. In practice, he behaves quite decently, fluidly, there are no objections or we simply did not come across such situations.

Battery 5000 mAh. We expected more than 35 percent of the remaining capacity that the phone offered us after ten hours of YouTube playback. This time the expectations were met, because the Infinix Note 11 Pro achieved a significantly better result with the same hardware base - and even has a larger screen, which means higher consumption. 48 percent of the battery remained after 10 hours of YouTube, and that is a realistic result, not a failure.

Although the average camera user on this phone would think that the camera has a small photo studio, there are actually fewer of them than there seem to be, that is, only two.

There’s a 64MP wide main which the manufacturer calls an Ultra Night camera, with an aperture of f/1.7 and a 13MP telephoto with an aperture of f / 1.8, both with phase autofocus and no optical stabilization. If you’re wondering what’s up with so many openings on the back, well there’s also a 2MP depth sensor and LED flash, as well as one opening that’s obviously there for decoration, for symmetry.

Maybe it would be nice if there was an ultra-wide sensor instead, but as it is, at least we can say that the cameras that are there are actually usable, that is. There are no additional poor quality sensors that are there because of the numerous condition.

Daily photos from both available cameras make very nice-looking photos during the day, although there are obvious differences between them, which is not surprising. The 64MP main one has a much better dynamic range than the 2x telephoto camera, which is at a decent level in that respect. By the way, let’s add that Infinix calls this telephoto sensor a 30x Ultra Zoom camera.

On the other hand, 2x zoom photos are more contrasting and have a slightly warmer color that slightly draws on red, which in some situations can actually be an advantage and sometimes looks better than the main camera. Of course, the 64MP sensor offers better sharpness than the 13MP, so 2x zoom photos are a bit softer, but also more sensitive to hand stability during shooting, especially since there is no general stabilization, so the difference will vary depending on that. Processing makes an additional difference because Infinix decided to implement a bit of additional software focusing on the images from the main camera, which was missing on 2x zoom.

In any case, they are not top quality, which is not expected, but they are absolutely usable during the day and with a little care you can take very beautiful photos for social networks. And at night?

Even at night, the situation is very similar and interesting, you will not be forced to use only the main camera, but the 2x zoom is very decent, although the main one is of course better performance due to the larger aperture and usually a bit sharper. The quality will again depend on the stability of the hand, as well as the amount of street light, so during the test, we took some very sharp night photos, but also those that are visibly blurry, although overall we can say that Infinix’s Super Night night mode works very well is absolutely competitive with some much more resonant names. It would be interesting to see how it works with some higher class sensors, but who knows, there may be opportunities for that. By the way, the default mode when you want to take photos is called AI Cam and of course uses artificial intelligence to recognize the scene, activate HDR processing and adjust parameters, and the camera application generally offers a lot of options, such as. using the fingerprint sensor to trigger the recording, or selecting the function that the volume keys will perform.

As far as video recording is concerned, things are a bit unusual, because 4K video is not supported, but only Full HD and 1440p, which we don’t remember seeing outside of GoPro cameras of older generations. At the same time, you can use a higher resolution, which of course looks better, only without stabilization, so when shooting on the go, things can be shaky. The good news is that Full HD in this case looks quite decent, we would say even better than on most phones where in addition to 4K support this resolution for the sake of order, and in Full HD stabilization is very decent, so we definitely recommend using this phone that combination for video. Interestingly, the night shots are absolutely usable, so that’s a general impression of the cameras on the Infinix Note 11 Pro - a very usable phone, even if it doesn’t offer some outstanding performance.

Let’s also mention the 16MP front camera, which doesn’t really impress with the level of detail or any other parameter, and which takes only correct selfie photos, it seems to be of the same quality day and night.