Desktop and laptop storage systems have changed a lot in recent years. In the past, large, noisy, and slow units were used that increased their capacity over time. 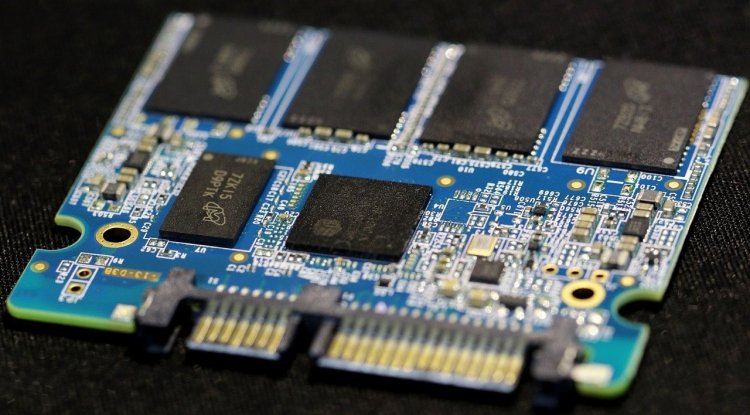 Desktop and laptop storage systems have changed a lot in recent years. In the past, large, noisy, and slow units were used that increased their capacity over time. Currently, we have much smaller units with different types of buses to reach the incredible speeds that dominate the current market for notebook and desktop PCs, M.2 SSDs. In this guide, we are going to show you the characteristics and differences of M.2 SATA and NVMe SSD drives.

This M.2 connector can use the PCI Express (NVMe) interface compatible up to the latest version depending on the PC model, the SATA 3.0 interface, or even USB 3.0. The M.2 connector can be compatible with any of these interfaces or even 3, which depends on the manufacturer and the type of compatibility that the equipment presents. This is because the M.2 standard is compatible with NVM Express and AHCI that give rise to these PCI Express or SATA interfaces.

Although we generally associate the M.2 port with SSDs, it can also be used to insert expansion cards. The most common that we find are Wi-Fi network cards. Commonly this type of connector is used in notebooks for these wireless network cards, but they are increasingly seen in desktop computers. The motherboards have an extra M.2 NVMe connector for a smaller card that is often used for wireless network cards.

Let's see in detail the characteristics of each type of connection available in M.2.

M.2 NVMe (Non-Volatile Memory Express) drives are the fastest type of memory currently available for home desktop and laptop computers. It is associated with the PCI Express bus and is a type of memory, as its name suggests, non-volatile. This is so we can store data and it will not be erased, even if it stops receiving current.

With NVMe overload I / S is reduced compared to older drives as SATA M.2. Thanks to this specification, it is possible to take advantage of the virtues presented by the new storage units composed mainly of memory chips.

These drives are generally cards that use the PCI Express bus. There are several sizes that are made up of specific length and width, although there is one that is used as a standard size, 2280 the 22 corresponds to the width and 80 to the length. The rest of the sizes, which are usually smaller, are used in specific devices and with a more contained size such as the Steam Deck. We leave you a table with the different specifications and speeds in MB / s and GB / s.

The NVMe has its own specification, starting at 1.0 in January 2013 and the latest available as of the date of this guide is 2.0a in July 2021. Each revision is updated to offer existing improvements in technology and adapt to new units available and thus be able to take advantage of their full potential. The NVMe is also tied to the available PCI Express bus reaching higher speeds when the specification is more recent.

M.2 drives with SATA (Serial ATA) connectivity are older drives. This was the first bus that was associated with this type of M.2 drives to begin to replace 2.5-inch SSDs. The SATA interface began in 2001 and has evolved in the same way to adapt to new technologies until it reaches the current and more modern SATA III bus, also called SATA 6 because of the amount of GB / s it can move.

The M.2 SATA drives support a maximum of 600 MB / s theoretical both in reading and writing, although in reality it hardly passes 560 MB / s, at first they were an ideal solution for computers where it is not possible (or it is complicated ) to fit a 2.5-inch form factor drive. An M.2 card with SATA bus was the ideal solution, a small card with the possibility of inserting a large amount of storage without taking up extra space since it even goes directly to the motherboard.

But the SATA standard was built to take advantage of the benefits of mechanical disk drives and didn't have much of a future for flash storage. M.2 SATA drives were used at the beginning but were soon replaced by the first NVMe that made use of the much faster PCI Express bus.

This is why M.2 drives began to lower their cost and it is cheaper to find M.2 SATA drives than PCI Express having the same storage capacity. Also, keep in mind that it is an older technology and M.2 SATA drives are slower than M.2 NVMe drives. Although today they are deprecated for new equipment and it is more cost-effective to use an older and cheaper standard NVMe drive.

M.2 NVMe vs SATA SSD: Which is better?

Units M.2 SATA have become old and everything is compatible with NVMe. Currently, devices that only have an M.2 connector with a SATA connection are not sold, the PCI Express has been standardized and is included in all boards to connect cards in standard format (such as graphics cards) or in M.2 format, where you can also connect an M.2 SATA.

If you have a somewhat older PC or laptop and you want to give it a new life if you are using a mechanical disk drive, you can check if it has an M.2 slot to connect SATA devices. By adding an M.2 SATA drive you will get a higher speed than your current hard drive, which can reach 160 Mb / s compared to the 550 MB / s offered by a SATA 6 Gb / s drive in M.2 format.

If, on the other hand, you are looking for speed and performance, with the M.2 NVMe drive is what you will get it. The higher the specification, the better result it will give you, but this already depends on the limitation of your hardware. It is not possible to use an M.2 PCI Express 5.0 SSD if your motherboard is PCI Express 4.0 (actually yes, but it will run at 4.0 speed ) and also the drive with the latest bus will always be more expensive.

In this case, the ideal is to look for an M.2 SSD unit according to your hardware. If you have a PCI Express 3.0 bus, it is better to put an M.2 NVMe SSD with a PCI Express 3.0 bus (the NVMe 1.3) and make sure that it offers the maximum speed since, as we have mentioned before, it can be x1, x2 or x4 and vary the speed being the same bus.

You can also use a faster M.2 NVMe drive for the main drive where you have the operating system and programs and use a slower (and cheaper) drive for extra storage. With a smaller capacity unit you have for Windows and the main programs, the storage unit can be larger and slower, with the consequent economic savings without affecting performance.

In summary, M.2 SATA drives are recommended only if your computer is somewhat older and does not support an M.2 NVMe drive. These are faster and so widespread that previous generations are even cheaper than M.2 SATA. If you want to have the highest speed and performance, you should opt for an NVMe with the latest PCI Express bus, in this way you will ensure you have the highest reading and writing speed that will give an advantage in games and the management of your PC.