Surface Pro tablets mostly use Intel’s low-power processors with generational upgrades without significant upgrades from one generation to the next. 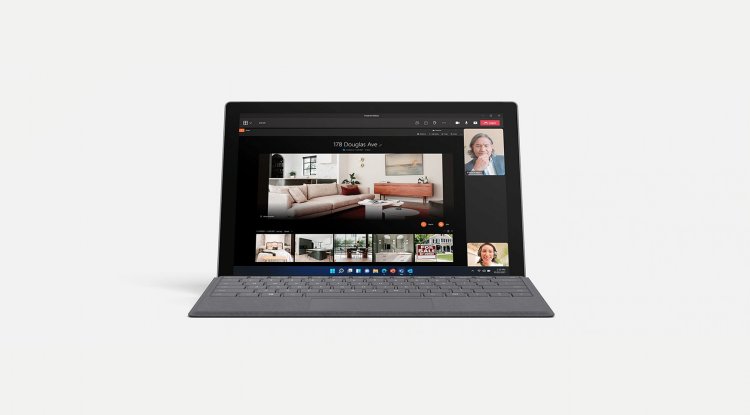 Microsoft has strictly focused its line of Surface Pro tablets on the business world, so you won’t run into significant physical differences back a few iterations.

Microsoft specializes in its hardware series and they are ideal for the business world. Of course, the average customer will not be disappointed, depending on what he expects from the tablet. Surface Pro tablets mostly use Intel’s low-power processors with generational upgrades without significant upgrades from one generation to the next, but innovations are being added gradually. This is also the case with the latest Pro 7 Plus model, which is the first upgrade after 2019 and remains at the same number (7), and gets the Plus name, a detail that you consider if you decide to buy because there are a few little things that could interested, especially if you are looking for a new laptop for business purposes.

Let’s look first at what we get from the outside, and then what changes the new Plus version brings us. The tablet is externally identical to the original Model 7, which is very similar to the previous six. The tablet on the front covers the glass with a 3: 2 screen of 2736 x 1824 pixels, the ratio according to us is ideal for surfing the web as well as for using office tools. Because of the different ratios, the multimedia will suffer a bit in the quality of the display with black edges, and the edges remain as significant as when this design first came with the Surface Pro 5 model.

Around the screen itself below the glass surface, we have black edges from 1.3 cm to 1.5 cm, depending on the page (shorter pages have thicker edges). On the one hand, it makes it easier to hold the tablets firmly, but the modern design of tablets with thinner edges does not give users any extreme difficulties nowadays, so we would still like to see a slightly thinner border. The rest of the tablet is metal and stands firmly in the hand and there are no bends during handling. Edges of the tablet on the top also have perforations for some kind of cooling, but keep in mind that the tablet cools passively and does not produce mechanical sounds. On the back has a camera, on the top, while the Microsoft logo is on the bottom half of the tablet.

The lower half has a built-in holder on a solid hinge that can hold it at a wide range of angles, and the hinges are very sturdy and it’s easy to use the touchscreen when the tablet is leaning. Beneath that holder are the latest additions to the new Plus tablet model.

It depends on the model you choose, but you can also get the tablet with LTE connectivity, it is about 4G speeds and technology, and it supports the Nano SIM card. In addition, there is another opening, and it is a cover under which the SSD tablet is hidden. We have seen this approach on tablets from Chinese manufacturers, and it greatly facilitates system upgrades as well as maintenance in case of failure, because it is still a business tablet for companies.

We use the M.2 2230 SSD specification, relatively small disks that are somewhat rarer on the market, but you also have the option with us. When the tablet is mounted on a stand, there are power/lock buttons on the top edge as well as a volume control right next to it.

The left side has a headphone jack and is magnetized to hold the stylus, while the right side has a standard USB A slot, as well as a USB-C slot that can be used for charging or DisplayPort output. There’s Microsoft’s unique connector that comes standard for attaching chargers, but Microsoft wants you to use it to connect peripherals like docks, which are, of course, unique because of the connectors. Tablet charging is specified at 65 W and supports most USB-C 65 W standard chargers.

There are a few more details around the screen. At the top corners of the black edges, you will find small notches that contain one speaker on each side, providing great sound directly to the user. Although it lacks deep tones, the sound is very clear even when listening louder, so we don’t have many complaints. The top edge also has several visible sensors. In addition to a high-quality camera that will ensure solid video conferencing, there is also an infrared camera that serves as a login via the Windows Hello face recognition service. The screen itself, as we have already mentioned, uses a 3: 2 ratio of 12.3 ”, and it is an IPS panel of solid performance, although there has been no progress for several generations. It can show almost the entire sRGB spectrum (98%) and is also visible from sharper viewing angles. The brightness of over 400 nits allows the use of tablets in daylight but will need to be rotated slightly to avoid reflections, depending on the environment. In terms of hardware, the Plus tablet model brings the 11th generation of Intel processors.