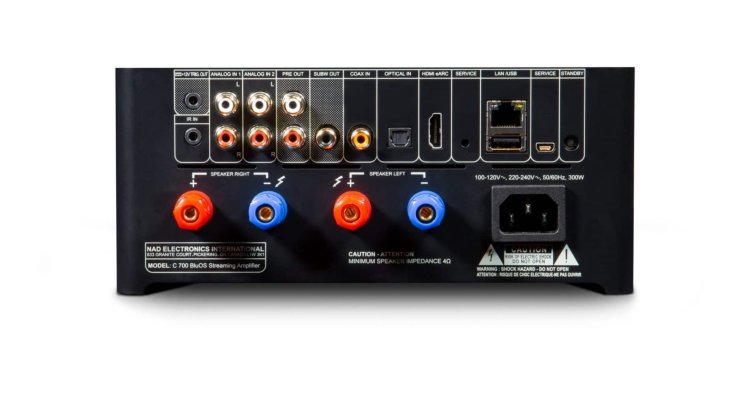 NAD has unveiled an amplifier that offers most of the features and capabilities of the company's excellent but extremely expensive M10, and costs almost half as much

Today we can talk about NAD as a kind of visionary, because many competitors have since presented amplifiers with the same ambition–to be smart, that is, to serve us not only as amplifiers but also as the primary analogue and digital source of sound. M10 had one serious drawback: in 2019 it cost the $2500, and today, in a slightly refreshed variant of the M10 V2, it sells for unattainable $2749.

It is here that NAD's new smart amplifier comes into play, placed on the market under the C700 designation, although it could also be called "M10 Light". In question, it takes on a number of characteristics of the company's trustee, in several respects to some extent "stepping on the ball", and finally manages to cost $1499. Although it is still big money, lovers of good sound can rationalize the cost by knowing that it is a truly comprehensive device, and at the same time probably the last amplifier they will want to buy.

Like its expensive brother, NAD C700 asks us to connect it to passive speakers for work and–that's all. Although we can certainly connect analogue and digital sound sources, such as TVs, CD players and turntables, to its rear connectors, this is not necessary, because they based the device on the BluOS software platform. BluOS is used via the BluOS Controller desktop (Windows, macOS) or mobile (Android, iOS) app. The application interface is designed to display buttons at the top of the main menu for quick access to our playlists, eats (favorite music services, radio stations or amplifier inputs) and favorites. Below that, we choose the entrance to which we want to transfer the amplifier. These can be Bluetooth, two analog inputs, a coaxial or optical digital input, and an HDMI eARC input, which represents the most intuitive way to connect NAD amplifiers and TVs. At the bottom of the menu is a list of supported music services, such as Deezer, Tidal, Spotify, Amazon Music, TuneIn Radio, Qobuz, Calm Radio, Radio Paradise and many others. You're missing support for YouTube Music, which is why it has to play over Bluetooth, as well as Apple Music — you can use it via AirPlay 2, which is duly supported.

When we select one of the supported services within the BluOS Controller (and enter user data for those who require a subscription), we have to search for and play the desired music, after which it will play it in the highest available quality. Tidal users will be interested to know that the C700 supports the MQA format, as well as the Tidal Connect service, so within Tidal's official app you will see it in the list of available music playback devices. The same goes for Spotify, or Spotify Connect. We can play music from these two services on the C700 without having to run the BluOS Controller app.

Ordering music through Siri, Alexa, and Google Assistant voice assistants is supported. We also have good news for Roon–C700 users with the label "Roon Ready".

In addition to all the above, BluOS Controller is also used to configure the amplifier itself, therefore, here you will adjust the brightness of its screen, rename or disable individual inputs, add or subtract bass and high frequencies, turn on the subwoofer (if connected) and define the frequency at which it is activated, limit the maximum power output, connect the NAD C700 to the remote control, and the like. The remote control does not come with an amplifier, but should be purchased separately, or take advantage of the ability to learn IR commands, with the help of which we can assign the functions of the NAD amplifier to any universal remote.

Externally, the NAD C700 is half narrower, a third "shallower" and slightly taller than the classic integrated stereo amplifier. Much of the front of the device is covered with a spacious, 5-inch screen, showing information about what's currently playing (album cover, artist and song title, duration and the like), as well as things like the selected input, current volume of sound (in percentage or decibel scale) and VU meters for the left and right channels. NAD does not specify what type of panel it is, but from wide viewing angles and imperfect black display, it is clear that it is an IPS matrix, which is also available in the more expensive M10. We are of the opinion that an OLED matrix would be more appropriate, since on it the black background of the interface would look incomparably deeper and more attractive, but it should be said that the screen looks very good as it does. NAD does not specify its resolution, but all graphical elements of the interface are satisfactorily sharp, even when approached.

The screen is not touch sensitive, as is the case with the M10, but there is a volume wheel on its right, and there are two navigation keys under it. The wheel can also be pressed as a button. With the combination of "clicks" and wheel turns on the amplifier itself, we perform the configuration of the amplifier and the selection of inputs, although it is all faster and more convenient to perform using the aforementioned BluOS Controller application. Some other handy controls are also available. For example, when we listen to music via Spotify Connect or Bluetooth, we can use these keys to switch between songs or pause playback.

Networking of NAD amplifiers is done using a built-in Wi-Fi 5 (802.11ac) wireless network card, or wired, via the rear gigabit Ethernet port. Wireless Bluetooth connectivity is two-way, meaning the C700 can receive audio from other sources, such as mobile phones and laptops, but also send it to wireless headphones and speakers. Wireless audio transmission takes place on the wings of bluetooth codec aptX HD, and when it is not available, SBC and AAC codecs come to the rescue. When using Bluetooth, we did not encounter any problems with signal stability.

The acoustic characteristics of NAD's C700 amplifier on paper are unremarkably different from the more expensive M10. The biggest difference relates to Dirac Live, an extremely powerful system for correction of space acoustics, in that it is not there in the C700. The C700 also uses a slightly worse digital-analog converter (ESS Sabre ES9010, instead of ES9028 in the M10 amplifier), although this is really difficult to hear in practice. In fact, the only option to feel the difference between the DACs of these two amplifiers is that on the C700 you try to play music content in a resolution that it does not support, which in itself is difficult to imagine, since PCM quality records up to 32-bit/192 kHz are neatly supported.

From all the tried and tested speakers (KEF Q550, Dali Opticon 2, Dynaudio Emit M20), NAD's amplifier extracted plenty of detail and reproduced the sound without audible excesses in any part of the frequency spectrum. The C700 has almost no tendencies to color sound, of course, assuming that you do not play with tonal controls in the BluOS Controller application. When we vented with the volume wheel, the C700 showed an unexpectedly lively temper, as it is somewhat suppressed when listening quietly. All in all, we feel that this amplifier tends to let the speakers sound the way their manufacturers imagined without forcibly trying to change their acoustic characteristics.

Daily coexistence with this amplifier in practice is almost indistinguishable from the M10, and its price is much cheaper, which in the eyes of the vast majority of customers will make it incomparably more tempting.