Noctua is often considered a benchmark when it comes to air coolers. The fans know how to impress with their smooth running, low volume and high efficiency. 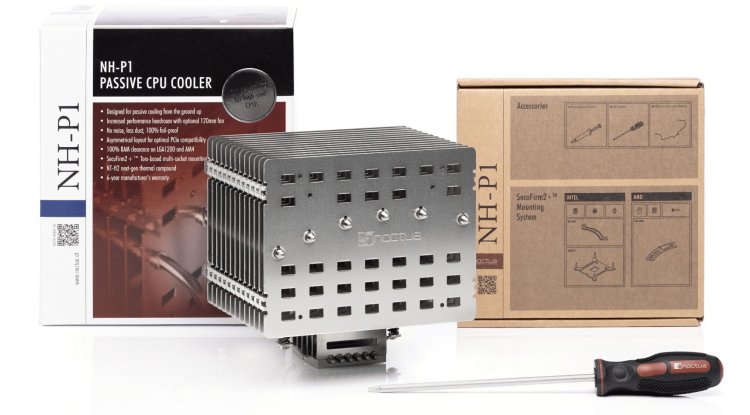 Noctua is often considered a benchmark when it comes to air coolers. The coolers know how to impress with their smooth running, low volume, and high efficiency. But not only that, but the manufacturer's coolers are also well-thought-out and functional concepts. The SecuFirm-2 mounting system is also convincing and saves its users a lot of fiddling. Apart from that, the manufacturer offers very long support for its products and supplies free upgrade kits for new CPU sockets. Read about the combination of Noctua's NH-P1 and Intel's new Alder Lake CPUs below.

However, Noctua not only sells high-end air coolers such as the NH-D15 or the NH-U14S, but also a passive solution, the NH-P1. Although this can optionally be equipped with a matching NF-A12x25 cooler, it has a considerable cooling capacity even without a cooler. When presenting this cooler, Noctua demonstrated with a Core i9-11900K that passive cooling solutions can at least adequately cool non-overclocked high-end processors. With the release of Alder Lake, a new generation of CPUs is now on the market that can generate a lot of waste heat under full load.

Like many other manufacturers, Noctua offers mounting kits for older coolers for the 1700 socket, which give many previous coolers a longer life. There are four kits for this. The NM-i17xx-MP78 is intended for coolers with a mounting distance of 78 mm and is also available in black. The NM-i-17xx-MP83 is accordingly intended for coolers with a spacing of 83 mm and, in addition to the normal version, it is also available in chromax-black.

Among other things, this kit is compatible with the passive NH-P1, so that even the latest processors can be passively cooled. However, the manufacturer has not yet completed its tests with Alder Lake and has therefore not yet made any recommendations as to whether the passive cooler is suitable for the new chips. Noctua sends all assembly kits free of charge to users who can show the invoices for their cooler and the corresponding platform. Otherwise, they can each be purchased for an RRP of € 7.90.