Keycaps with graphics card motifs seem to be becoming more and more fashionable. After Asus, Nvidia is now also introducing a keycap for mechanical keyboards. 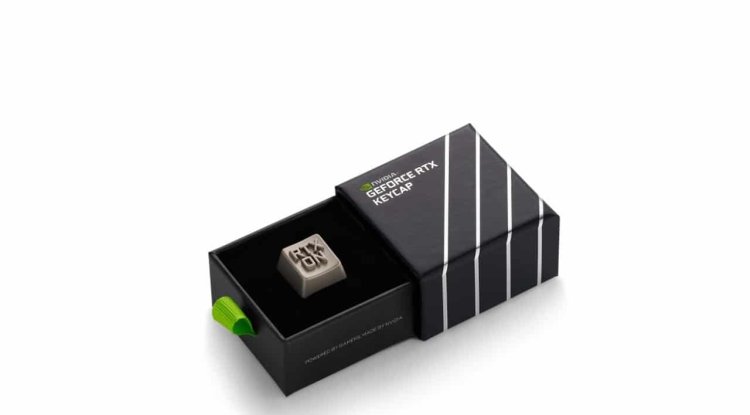 Keycaps with graphics card motifs seem to be becoming more and more fashionable. After Asus, Nvidia is now also introducing a keycap for mechanical keyboards - typical for Geforce with an RTX design.

It's not yet ready to speak of a real trend, but it's noticeable that two keycaps with graphics card motifs were presented within a few days.

At Asus, it was still a keycap in the style of the well-known ROG Strix graphics cards. The aluminum keycap called Touchstone is intended for the right shift key on keyboards with Cherry MX-like attachment points and measures 51 x 18 x 11 mm (2.75U) and weighs 34 grams. You have to pay around 60 dollars for it. The Touchstone also has ball bearings under the hood, which cause the indicated "fans" to rotate when pressed. Additionally, Asus has taken the trouble to create a replica of the distinctive inner and outer packaging of its line of graphics cards.

Apparently, Nvidia does not plan to sell the RTX keycap now presented as a replacement for the ESC button in its own shop.

"It's time to bring the magic of RTX technology to your keyboard," says the corresponding introduction blog. "You should show your Geforce enthusiasm with the brand new Geforce RTX keycap made of brushed aluminum", Nvidia continues.

The new gaming accessories were made exclusively for the community. This is intended to "reward fans of Geforce gaming worldwide" in spring and early summer. According to Nvidia, there are a variety of rewards and chances of winning via the social channels on Twitter, Facebook, and Instagram. A corresponding campaign is currently running on Nvidia's Twitter channel.

It goes on to say, "We're looking for anyone with a passion for gaming, graphics, and technology, and we might DM you and reward you with your very own limited-edition GeForce RTX keycap!".

In other news, Obviously, NVIDIA is completely aware that Elden Ring is no longer one of the most important releases of February, let alone the entire year. Expected since 2019, and with George RR Martin’s great signing, there is little reason to doubt that the high expectations that have been built up over the years will not be satisfied. On the contrary, based on what we know so far (although we no longer hold our breath for a launch), it appears that it will finally be a fantastic game.

Only a few weeks ago, it entered the Gold phase, i.e., the final version ready for distribution. NVIDIA has given its consumers some very excellent news today.