The RTX 3050 is based on the NVIDIA Ampere platform as standard. This card with RT and Tensor cores has options such as “ray tracing” and DLSS. 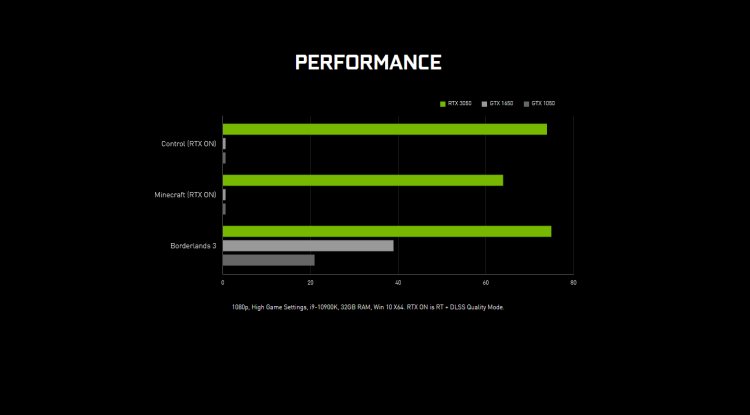 For starters, we can expect that we will not be able to get it because in most places where it was available - already sold out. If we manage to find it somewhere, we must be willing to pay a much higher, usually resale price. That is simply the reality in which we currently live. Those lucky ones who manage to get it will notice an extremely positive shift in performance from the previous generation.

The RTX 3050 is based on the NVIDIA Ampere platform as standard, as is the rest of the 3000 series. However, significant improvements have been added over the last-generation Turing core - this is the first xx50 series card with full RTX features. In short, this means that the card with RT and Tensor cores has options such as “ray tracing” and DLSS (Deep Learning Super Sampling), of which the latter will be much more interesting in terms of performance.

In addition to the above, it is worth noting the higher number of streaming processors and the increase in the number of CUDA cores of each of these processors to 2560, as opposed to the 892 that the GTX 1650 card had. VRAM has been raised to 8GB GDDR6. This should result in significant performance improvements - as much as 70% compared to the GTX 1650, of course, if we look at just those two cards without the rest of the offer and price ratio. With the increase in the number of streaming processors comes higher power consumption, although not drastic - 130W TGP, unlike 75W in GTX 1650.

This model is the first time we have encountered ray tracing technology on XX50 graphics cards and a handful of other good features - DLSS, low operating temperatures, etc., but there is an approximate starting price of $250 ( we are talking about prices in the United States), which makes this graphics card almost twice as expensive as the previous generation’s comparable card, and when added supply problems, silicon shortages and rising reseller prices, it is to be expected that prices will be in the range of $400 for the “cheapest” models. All this ultimately suggests that those who want to put together a “budget” gaming computer will still have to wait for better times or turn to used options.

For those who are not enthusiastic about the idea of ​​buying used computer parts, the best option is to turn to consoles. Here the calculation is quite simple - if you are trying to put together some acceptable configuration for which you do not need a non-purpose credit, and which can run most games that interest you, with today’s component prices you need twice as much money as you would for a gaming console like PS5 or Xbox Series X.

Streaming services are also not a bad option if your internet connection is good. Official instructions for GeForce Now from NVIDIA state that a speed of 15MBPS is required for gaming in 720p resolution, or 25MBPS for 1080p at 60 frames per second. In reality, due to various factors, it should be much higher, some 50MBPS as the minimum speed for a fluid experience. Also, for this type of game it is not necessary to have a powerful computer, it can be run with some kind of dual-core processor and 4GB of RAM.

But let’s get back to the topic of this article. Does this card mean the end of cheaper options and when will it be possible to put together a good “budget” gaming computer as before? It is difficult to think of an answer that is not pessimistic, and with good reason. We have been facing a steady increase in graphics card prices since 2018. AMD, once a “go to” choice for great and affordable hardware, has left that market segment, both in terms of processors and graphics.

Also, NVIDIA has been steadily rising since the launch of the Turing architecture. However, people are still buying their products and companies are seeing it. It is hard to believe that even after the procurement crisis and shortages, the company will decide to return prices to the old one for a simple reason - graphics cards are still selling well, despite the high prices and all the accompanying circumstances.

The choice is and will always be up to you. If you decide to buy an NVIDIA RTX 3050 graphics card, one thing is for sure - you will get a capable and (relatively) affordable graphics card with which you will be able to run almost all the games you own, without significantly sacrificing performance.