I know what you mean, again another vintage-inspired watch from Orissa. But stay with me for a second, this one might be interesting to you. 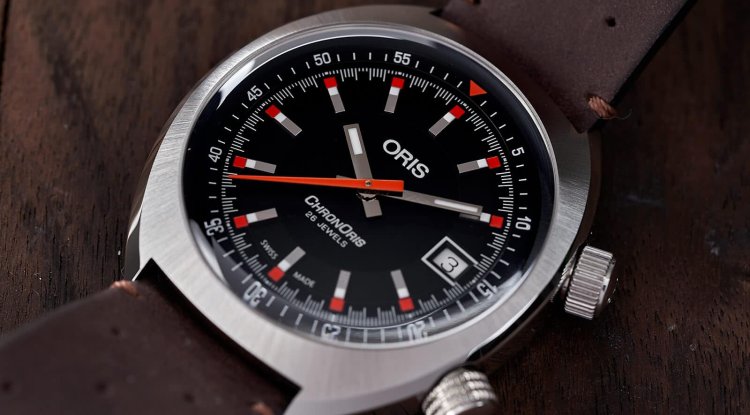 I know what you mean, again another vintage-inspired watch from Orissa. But stay with me for a second, this one might be interesting to you.

In the last three years, Oris has very successfully created a very strong and attractive offer for fans of modern vintage watches. Remember the  Sixty Five and  Carl Brashear models? They weren't the most expensive, they didn't have some unique features, but most importantly - they were extremely fun to wear.

At last year’s BaselWorld, Oris once again unveiled a collection of modern vintage watches, including the new ChronOris Date inspired by the company’s first chronograph from the 1970s.

Instead of a chronograph, ChronOris Date is a classic, 39mm steel three-hander that looks like it has spent the last 50 years in a safe. You feel it the first moment you hold it in your hand. Since it is not a diver but a watch inspired by a racing chronograph from the '70s, attention was paid to the dimensions, so the profile of the case is extremely thin.

Like its predecessor, the ChronOris Date has a very specific case design, something that fans of older military watches would call a BUND case. With only 39mm in diameter and a very small 45mm distance from the integrated belt holders, the ChronOris sits surprisingly comfortably on the hand. Like most watches from that era, the case is decorated with a phenomenal sunburst pattern on the front, along which extends a polished line (so-called bevel ) that separates the polished hips from the brushed front.

It is interesting, but also very atypical that Oris offers this model on as many as four different belts, rubber,  distressed leather, NATO belt, and metal bracelet. We were struck by the latest combination of metal which may not be the first choice of fans of this type of watch, but it is actually a very comfortable and incredibly complex designed metal belt with polished central mini links (there are no less than 13!).

The retro style is continued on the dial where the three main colors of the ’70s dominate: black, gray, and of course, the one that takes the dial to a whole new level - orange. Next to the date window at 3 am is a very complicated minute scale that dominates the edge of the dial. However, what is not noticeable at first glance is the extremely discreet inner rotating lunette that is adjusted via the outer crown (threaded) at 4h.

The lunette is bidirectional and it is possible to measure time intervals for a maximum of 60 minutes. In addition to having 120 positions, the mechanical feedback transmitted by the lunette movement mechanism is perhaps one of the most accurate and best I have had the opportunity to try. The very specific dull and loud sound gives the impression of quality and it is almost impossible to make a mistake with adjusting the lunette to the marked marker.

The upper crown (at 2h, which miraculously is not threaded) has two basic functions: winding the mechanical mechanism and setting the time and date. For ChronOris Date, Oris chose a reliable Swiss Sellita SW200-1 mechanism. Essentially, it is an adequate replacement for the planetarily popular ETA 2824, which beats at 4Hz and has a power reserve of about 38 hours. From some horological aspect nothing new, especially when we talk about Oris which quite often uses these mechanisms, but on the other hand, you can be sure that from a mechanical point of view you will not have any problems.

WHAT IS CHRONORIS ON HAND?

If you’re one of those who simply adore thin, vintage watches, with this one you’ll feel right at home. With 39mm in diameter, 12mm thick, and only 77g in weight (without a metal strap), you can't even feel the ChronOris on hand and is a real refreshment in today's modern, unstoppable trend of massive sports watches. The case is extremely well implemented in a retro flair, which you will feel for the first time when the sun’s rays illuminate that brushed sunburst pattern on the front of the case.

With this one, you can throw yourself into the pool without any problems, thanks to modern engineering and seals that guarantee 100m of it being waterproof. It is also very gratifying that Oris also put a modern version of BGW9 illumination on the clock markers of the dials and hands. As expected, it is not in the amount you would expect from an equivalent diver model, but it is in a solid amount that you can read the time in pitch darkness.

Double-curved sapphire with anti-reflective coating perfectly solves unwanted reflections and extreme curvature at the junction of glass and housing gives a very interesting warp effect on the dial. All in all, Oris has once again managed to present a model that is mostly fun. It may not be the most advanced, it’s definitely not the most expensive but tuck it in for the weekend on a few NATO belts in a variety of colors and you’ll see what I’m talking about.