If you are looking for a bedroom TV, and your budget is roughly in line with the price of the Samsung Freestyle projector, buy it instead. 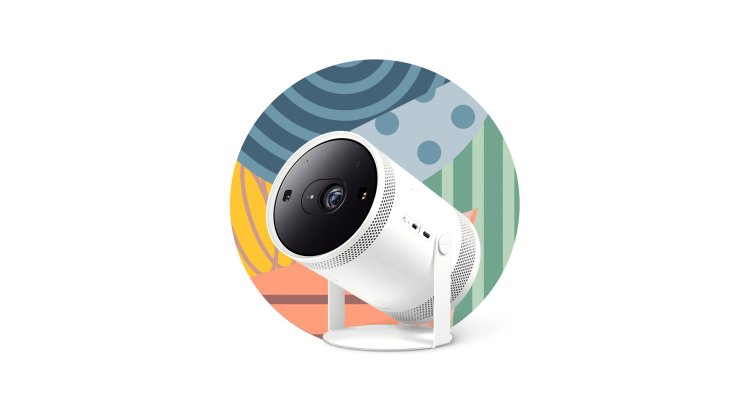 Given the legitimate public interest around the new Galaxy S22 family of mobile phones, the Samsung Freestyle is easy to overlook. But that is a mistake. It is an ingenious device with several parameters.

At first, they were projectors. The emperors of home cinema, with huge diagonals, were nowhere near them - but that was when 32-inch TVs were the pinnacle of technology.

Today? They are becoming rarer, except for business purposes. And it’s no surprise: large diagonal TVs have become ridiculously cheap (compared to 5 or 10 years ago) and cell phones with great and large OLED screens are taking their share of the multimedia consumption pie.

Projectors got the wind in their backs with LED lamps 5-6 years ago, when expensive and sensitive bulbs (you had to change them every 1000 operating hours) completely disappeared from all classes. LED diodes last 20-30 times longer and consume far less electricity.

You guessed it, this has led to the emergence of portable projectors with a battery, built-in or external - as needed.

For example, today we have OLED TV in the room, we watch multimedia content and from mobile phones. It must also be admitted that it is best to watch movies from the bed, on the ceiling, with a larger diagonal and less eyestrain.

Let’s not forget, projectors are the most comfortable because of their reflective, not emission nature. In translation; the image from the reflector will never shine and tire your eyes because you are watching the reflection, while with the TV you are looking directly at the light source (LED or OLED, it doesn’t matter).

Let’s remember: the DLP projector is the best choice for home cinema. It has better contrast and color display than LCD projectors, which are brighter. Does it matter Depends? If you watch by day, LCD brightness brings benefits, but for home cinema, in the dark, a DLP projector like Samsung Freestyle is definitely better.

Samsung has equipped Freeestyle with modern processors, so focusing, leveling and keystone image correction is automatic and fast.

There is also a very convenient four-step image size change without moving the projector, as well as color correction, depending on the background on which the image is projected. This is one of the most capable projectors in terms of setup - just turn it on, and that’s it. If you’ve ever used a projector, you know what a hassle it can be while adjusting and focusing the image…

And when you turn it on, what awaits you is Tizen TV, a modern, fast and attractive Smart TV that Samsung has been developing for its TVs for years. Connect it to the internet, and that’s it - all the features of the premium modern Smart TV operating system are here, and it also looks and works well. Of course, there’s also a voice assistant, mirroring a picture from a cell phone.

But the Samsung Freestyle isn’t just a classic projector. It is also a capable omnidirectional speaker, has an attractive ambient mode and an interesting ability to stream TV images from Samsung Q70 TV or better, from 2017.

And the battery? It’s not built-in, but you can connect to some external power bank, and that’s great when you carry it to the cottage, for example.

If you are looking for a bedroom TV, and your budget is roughly in line with the price of the Samsung Freestyle projector, buy it instead. It is a brilliant choice for children’s rooms, cottages and bedrooms. The only thing he can’t do is change the TV during the day - but asking for something like that from a small, portable projector is rude…