At the CES, the televisions for the new year are traditionally presented and Samsung has mainly innovations in micro-LED in its luggage for its QLED range. 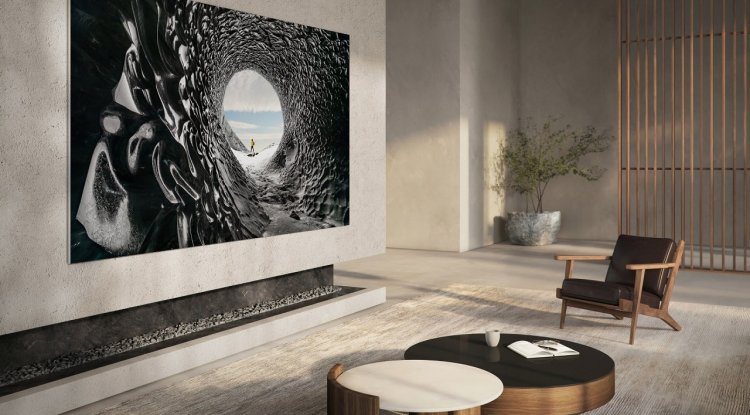 At the CES in Las Vegas, the televisions for the new year are traditionally presented and Samsung has mainly innovations in micro-LED in its luggage for its QLED range. The often speculated QD OLED devices were not an issue.

Samsung used the CES to present part of the television program for the year 2022. First of all: The much-discussed QD-OLEDs are not the subject of the presentation. Either they are not planned for this year's generation of televisions or will be presented later in the year. For the rest of the devices, as has recently been customary in the industry, evolution instead of revolution. The most interesting thing is therefore the development of micro-LED devices, as this is where the biggest leaps can be made.

The TV program with micro-LEDs in 2022 will consist of improved devices from the previous year, which will be offered in diagonals of 89, 101, and 110 inches. Samsung promises "an impressive experience with impressive depth, lifelike colors and a lot of clarity and contrast". In addition to the updates to the hardware, the panels offer a 20-bit grayscale depth and one million brightness and color levels as well as 100 percent of the DCI and Adobe RGB color scale. The narrow frames are a specialty of Samsung - that means a ratio of screen to the housing of 99.99 percent.

As usual at CES, and this also applies to the devices in the coming course, customers are only given a first glimpse of the devices. Technical details, availability, and prices are rather few and far between. The prices can at least be based on the previous year: the 99-inch micro-LED television cost 140,000 dollars and the 110-inch model 170,000 dollars. The prices should be announced around Easter; the availability will be given sometime towards the end of the first half of the year.

The QLED devices for 2022 are an evolution of the models from last year, where the Neo models were newly introduced. With the new Quantum processor and adapted software, improved contrast mapping with the background lighting and increased brightness levels from 12 to 14 bits for better control of the light sources should now be possible. The mini-LEDs can be addressed with 16,384 levels instead of the previous 4,096 levels. According to Samsung, the new Shape Adaptive Light technology uses the Neo-Quantum processor to analyze lines, shapes, and surfaces in order to control the shape of the light from the mini-LEDs and thus adjust the brightness and precision of all shapes on the screen.

In addition, the sound functions have been upgraded compared to the previous model. Building on OTS (Object Tracking Sound), in which the sound moves through the room together with the object on the screen, the 2022 products will be equipped with OTS Pro. For this purpose, Samsung has installed an upward-facing loudspeaker. The result is likely to be in the area of ​​soundbars in general and, due to the design, cannot compete with a full-fledged loudspeaker set-up. A 6.2.4 system with 90 watts of power is installed at the top, which primarily supports Dolby Atmos.

The evolution is also visible in the name, where the model names of the previous year's models with an A now become a B. And so there are many details that are a little better than in 2021. For example, the refresh rate of 144 Hertz instead of the previous 120 Hertz.

Samsung has also updated the lifestyle devices - The Frame, The Sero, and The Serif. You get new, matt panels with anti-glare, anti-reflection, and anti-fingerprint properties. For this, the new matt display received three verifications from UL (Underwriter Laboratories) as "Reflection Glare Free", "Discomfort Glare Free" and "Disability Glare Free".

The topic of NFT (Non-Fungible Token) does not go past televisions either, and so Samsung is also offering corresponding blockchain content in the new Smarthub: "This application offers an intuitive, integrated platform for searching, buying and trading digital works of art via MICRO LED, Neo QLED and The Frame. " We will probably only find out more about this in the coming weeks. For gamers, there is the Gaming Hub and for calibration, there is Smart Calibration, which is intended to simplify the process and enable the smartphone camera to be used. The function of having a "watch party" - that is, to watch a film with several users - is potentially interesting. How exactly this is implemented has not yet been answered.

In line with this, Samsung has also renovated the soundbars for 2022, relaunched the HW-S800B Ultra Slim Soundbar, and developed a new wall bracket that offers a pivot mode for Lifestyle and QLED devices.