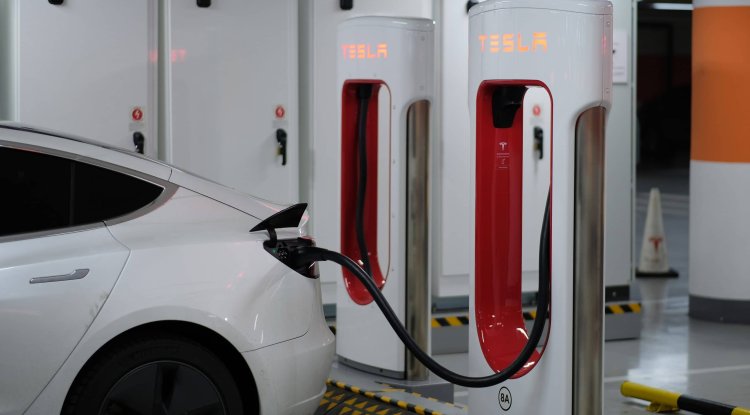 Tesla has begun installing Starlink internet satellite dishes at some of its charging stations, possibly in a bid to offer Wi-Fi connectivity to EV owners so they can pass the time streaming content while they wait for their car to charge. For some time now, Tesla owners have been asking for reliable internet connectivity infrastructure at these charging locations so they can install updates or keep themselves busy with web browsing or gaming while their car batteries are recharged.

As a reminder, Tesla owners can take advantage of the in-car infotainment system to stream content from services like Netflix. However, the ability to do this over the cellular network is only available to people who pay a monthly fee for Premium connectivity that costs $9.99.

For Tesla customers who do not have an active subscription, having a Starlink receiver to give Wi-Fi coverage at charging stations would be ideal. Talking about its internet ambitions, however, the company has been expanding the footprint of its Starlink internet service after taking it out of the beta stage. And last week, the company unveiled a new rectangular receiver dish that is lighter and smaller than the older version with a round profile.

It appears that Tesla is bringing its Starlink internet system to charging stations in various locations, without publicly revealing the intentions behind the move. Electrek spotted a Reddit post in which a user shared an image of the Dishy McFlatface Starlink receiver at a charging location in Lake City, Florida. Another Reddit user claimed to have seen the receiver at the aforementioned charging station in the comments section. A Twitter user named Brandon also shared some images of a Starlink antenna on a 250 kW supercharger outlet in the Lisbon area of ​​Connecticut. An FCC document released in October revealed that the Starlink receiver could withstand adverse weather conditions, meaning the company will have no durability issues when installing it in remote supercharger locations.

In October, Tesla CEO Elon Musk tweeted that Supercharger locations will provide Wi-Fi while responding to users' complaints that these charging stations must offer the service so Tesla owners can perform tasks such as downloading software updates. But so far, there's been no official information on how Musk will deliver on his promise. And the fact that the world's most valuable auto company doesn't have a public relations department doesn't help either. It might be claimed that the corporation is bringing Starlink equipment to its charging spots to boost visibility and make management easier, especially given that it is now opening these stations to electric vehicles from other manufacturers.

From a customer perspective, the most significant benefit is that Tesla owners will be able to use Starlink Wi-Fi and engage in some online entertainment while the car is charging – without having to pay for premium connectivity. In February of this year, Tesla cut the price of its in-car infotainment system upgrade by $1,500 for Model S and Model X buyers. Enhanced video playback (through access to platforms such as YouTube, Hulu, and Netflix, among others) and access to TeslaArcade for games with lots of graphics. With the reduced price of the car entertainment panel, Starlink coming out of beta, and the constellation of satellites getting denser quickly, all the pieces seem to be falling into place right now.