However, if you need MacBook Pro for a business tool, then have no doubt which laptop is the best to work with - choose the MacBook Pro 16”. 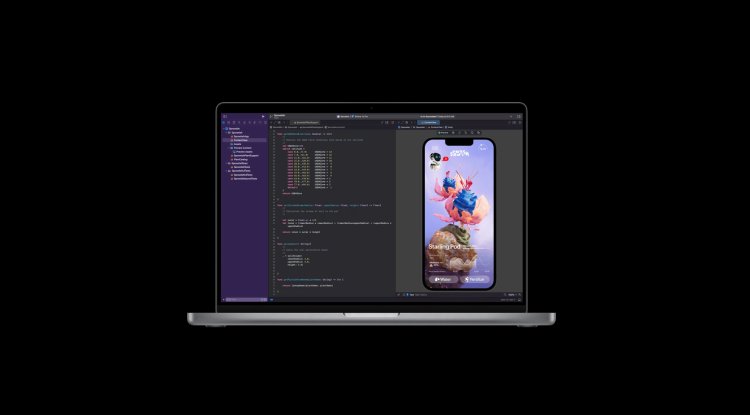 After great impressions working with the MacBook Pro 14 version, it’s really hard to expect anything better than of course the bigger screen on the 16“ model. However, if you need MacBook Pro for a business tool, then have no doubt which laptop is the best to work with - choose the MacBook Pro 16”.

Here’s what we wrote about the MacBook Pro 14

Although it doesn’t look as harmonious and beautiful as the smaller model, the MacBook Pro 16“ is undoubtedly bigger, heavier, but also more comfortable to work with. His workplace is your desk, with the option to take it with you when you really need a presentation to a client. After all, this is confirmed by its dimensions - it is a little more than 4 centimeters wider, just over two and a half centimeters deeper and barely two millimeters thicker than fourteen.

It weighs a noticeable 500 grams. Our test specimen arrived in Space Gray, a darker shade of gray unibody aluminum case. Despite the larger surface while remaining almost equally thin, the firmness of the body under the arm is without any objection. The feeling is safe and firmly firm without any twists and crunches. The only thing is that due to the larger metal surface when you charge when the computer is connected to the AC adapter, you will feel the effect of the charge on the touch of your hand. Someone was even afraid of that effect as if it would be struck by an electric shock, and reflexively pulled his hand away, with an astonishing look - “what would this be?”.

But you forget all that the moment you open the computer cover and see that Retina mini LED screen. You are simply overwhelmed by the numbness, the faintness of pleasure when you see that image, color, contrast. The screen opens at a maximum angle of 145 degrees. The larger surface is very noticeable and used in working with applications. That is why the 16 is undoubtedly better as a “working machine” compared to the smaller 14“ model. This XDR Retina screen with its brutal brightness, contrast and refresh option at 120Hz simply leaves you speechless, let alone some objections. The bigger the screen, the stronger and more impressive that impression. It achieves those 1000nits in working with HDR content, and we measured as much as 1300nits during the measurement. In SDR with standard contents, the lighting goes up to a maximum of 500 nits. It is important to point out here that HDR is not only games and movies, but also new versions of applications such as Adobe Premiere Pro and Cinema 4D and others that support HDR mode. The famous notch is also present, but it is less noticeable in the larger screen version. There is nothing better on this type of device and point.

And, since the sound zones are bigger in the 16-inch version, bigger drivers were used, so the sound is even better. It’s so beautiful, warm and full of detail while listening to music or watching a movie, that the question simply arises as to whether it can do better than this on a single laptop. Basically, there is no competition for now.

The keyboard is the same as on the fourteen-inch model and we will not repeat ourselves, except for a small surprise with the presence of a giant “touchpad” which, with a suitable pen, could easily serve as a small drawing board. Although it has an above-average surface, it seems perfectly balanced in terms of finger movement, and while dragging the cursor over a wider screen, it is ideally positioned so that the root of the thumb rests on the intended rest area, and accidental contact situations do not produce unwanted actions in the running application.

The cooling system with double centrifugal fans with the help of even larger intake and exhaust vents is more efficient in practice and maintains minimum operating temperatures without any problems, even with a more demanding load on the installed hardware. Because of the larger surface of the cooler, the body itself and the longer heat pipes, it gives the feeling of being cooler than the 14” model, despite the stronger processor.

The layout of the connectors and their selection is the same as with the smaller MacBook Pro. For the target group of more demanding users, it is important to have more fast USB-C ports with TB4 and USB 4 specifications that transfer data at a speed of 40Gbps. In addition, they can be used for charging in both cases, whether you are charging a laptop or in the opposite direction if you need to recharge your mobile device. Of course, in this case, too, there is a Secure Digital memory card reader of higher capacity and UHS-II speed class.

This in this case means that the lithium polymer battery with a capacity of 100Wh will be a third of the capacity full in 16 minutes, half the capacity full in 28 minutes, while it is fully charged in about an hour and 15 minutes. It is interesting how the consumption fluctuates during fast charging. The computer initially pulls some 100 W and soon increases to 140W to drop over 50 percent to 86W and eventually pulls barely 60 W.

But what really left us without comment is autonomy. Without a doubt, this is the laptop with the greatest measured working autonomy in our tests so far. We started the test in the afternoon and decided to see how long it can play YT video with 80% light intensity. Later in the evening, I was unable to track it down, and in the morning we were surprised because the MacBook Pro 16 was still playing clips with no indication that it was running out of batteries. The final result is 16 hours and 32 minutes. For those who do more demanding work, we have tried how it behaves in terms of performance and battery life when the active core is mostly in charge of performance. There is practically no difference in performance during the entire battery capacity, whether you are working on a rectifier or a battery...

This result is even more valuable when you keep in mind that the 16” version of the MacBook Pro model has a stronger M1 Pro “System on Chip” to which two high-performance processor cores have been added, while the number of energy-saving ones has remained the same. The GPU was also boosted with two additional cores while the NPU unit remained unchanged. Otherwise, the MacBook Pro 16 does not come with a weaker M1 Pro version of the processor, while both versions of the stronger M1 MAX processor are available.

The system was equipped with 16GB of LPDDR5 RAM and a 512GB NVMe PCIex4 SSD, which are of course soldered to the board. It may not seem like much, but let’s look at the results and how the stronger M1 Pro looks indirect power measurement.

Impressions in the work

When analyzing the results, keep in mind that the strongest Ryzen and Intel Core mobile processors achieved results with the assistance of separate mostly the strongest mobile variants of GeForce processors, if you compare these processors as SoC solutions that use int. graphics core, AMD and Intel competition, in this case, is at least 2-3x slower in applications such as Adobe Premiere Pro and the like.

Also, be sure to use the latest versions of applications with optimization for the new Apple M1 Pro processors. The difference is noticeable because the performance is even better than the already good ones - expect a gain of at least 10% -15% depending on whether only the processor or graphics core is used, and up to 40% in their combined optimized use in programs like Adobe Premier and DaVinci Resolve in the latest 17.4 version.

We couldn’t resist comparing the MacBook Pro 16 with some of the strongest mainstream desktop platforms. You should not be euphoric and prone to exaggeration, but the fact that you are comparing a laptop with the performance of strong desktop systems is to be respected. In some graphically demanding operations, Nvidia and Radeon graphics cards are up to 2-3x faster and there is no discussion, so now the second question is whether you use all these graphically demanding effects and filters when video editing. We tell you this from our experience.

In some situations, on the example of our representative material, we noticed only a minimal difference of 2.5% in favor of Threadripper processors and RTX 2060 SUPER graphics cards. It is surprising how well optimized the work of Apple M1 Pro processor cores is, while the G13 graphics core is a part of which we expect improvement. However, this version is 20-25x faster in DaVinci Resolve 17 video export and massive graphics effects processing compared to the Intel Iris Xe core with 32EU and 256 shader units of integrated graphics, which is in the strongest example of Core i9 12900K desktop processor. By the way, the MacBook Pro 16 is not perfect when it comes to the experience of working in 4K video editing - as if it had one moment of delay, literally seconds that you feel like a gap of time under the space bar before it starts working. Still keep in mind the fact that it had 4x less RAM than the system we compared it to.