This year, ASRock has refreshed the offer of Socket AM4 boards with new models. One of them is the B550 PG Riptide, which targets users looking for a more affordable quality board for their new Ryzen 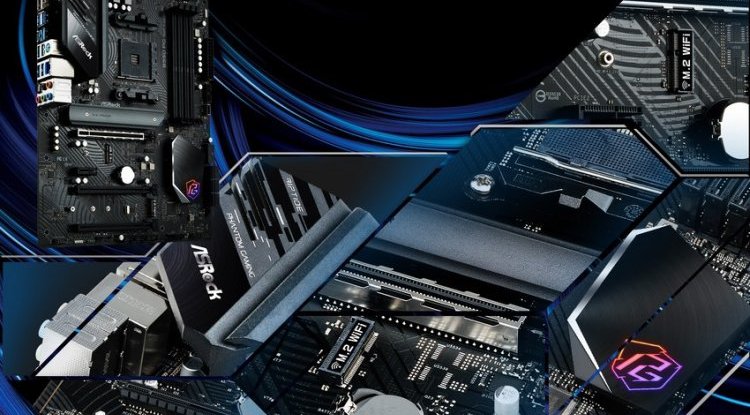 The Riptide model is completely new in ASRock's range of motherboards and was launched this year with its sister model X570S PG Riptide. A striking novelty with the X570 chipset-based board is the passive cooling of the chipset, but unlike the old X570 boards, the B550 boards never had that problem. On the other hand, the biggest drawback of the B550 chipset is that it does not support the PCIe 4.0 interface, so the secondary PCIe and M.2 slots on the boards only support the older generation of PCIe standards.

The B550 PG Riptide (PG comes from Phantom Gaming) comes with non-standard accessories. In addition to a pair of black SATA cables, M.2 SSD fixing screws, and a protective plate for the rear connectors, the ASRock also comes with a bracket for securing longer graphics cards. This accessory is screwed to the bottom of the right edge of the board and secures the card from bending down.

The panel looks very elegant because practically all parts are made of black material. The monochrome design is broken only by the discreetly lit PG logo on the chipset cooler. To connect additional lighting, the board offers two 5-volt and 12-volt RGB connectors each. As many as seven connectors are available for connecting fans, which can be finely controlled from UEFI. When it comes to internal USB connectors, Riptide offers two 5-gigabit USB 3.2, one 10-gigabit USB-C, and three USB 2.0 - pretty solid for a board priced under $ 1,500.

The look is deceiving

The cards can be built into the primary PCIe 4.0 x16 slot, reinforced with a metal sheath, the secondary PCIe 3.0 x16, which internally offers x4 bandwidth, and the third PCIe 3.0 x16 slot, which internally offers only one PCIe channel, and a small x1 slot. What is the point of the lower large PCIe slot with x1 bandwidth, I guess only ASRock engineers know. The board offers three M.2 slots, with two intended for the installation of M.2 SSDs, and one for a 30 mm Wi-Fi / BT module, for whose antennas the board is prepared on a board with external connectors. Only the upper M.2 slot, placed above the first PCIe x16 slot, is compatible with the NVMe Gen4 standard, if in a socket built-in processor with such a controller. The second is the M.2 slot for SSDs connected to the controller in the chipset, and thus offers NVMe PCIe 3.0 x4 bandwidth, with its use disconnecting two of the six available SATA connectors on the right edge of the board. SSD cooling is only available on the main M.2 slot.

ASRock was also stingy on the Riptide model in terms of cooling the processor power unit, because the mid-size heatsink covers only the phases that power the CPU cores (eight pieces), while two are intended for the rest of the chip, bare. It is not a tragedy, but it symbolizes an austerity approach. The phases are based on the cheaper 50-amp DrMOS elements of SiC654 from Vishay Siliconix and are connected via a signal doubler to the PWM controller UP9505S. Interestingly, ASRock uses more advanced doublers, that is, quadruplets, because there are only two chips on the underside of the board, to which eight voltage phases are connected. As you probably guessed, the PWM controller is a cheaper type, which also explains the fact that there is no internal heating monitoring. Measured with an infrared thermometer on the heatsink, the voltage unit in combination with the Ryzen 9 5900X at full load reaches a temperature of 48 ° C (T ambient = 23 ° C), or ten degrees higher if the processor runs with Precision Boost Overdrive on. If you are interested in finer manual overclocking with higher voltages, this board is not the best choice.

The offer of external ports is very good for a solution from the lower middle segment. There are HDMI 2.0b, two USB 2.0, six USB 3.2 Gen 1x1 (5-gigabit USB), two USB 3.2 Gen 2x1 (10-gigabit USB, A, and C connector), PS / 2 connector, RJ-45 connector, behind which is a 2.5-gigabit Killer controller, and five analog and one digital connector of the integrated sound card. The audio chip, located behind the connector is the ALC897, a fairly old solution, which board manufacturers use when they want to save as much as possible. Still, in practice, our measurements with the Right Mark Audio Analyzer show that the audio system behaves very well.