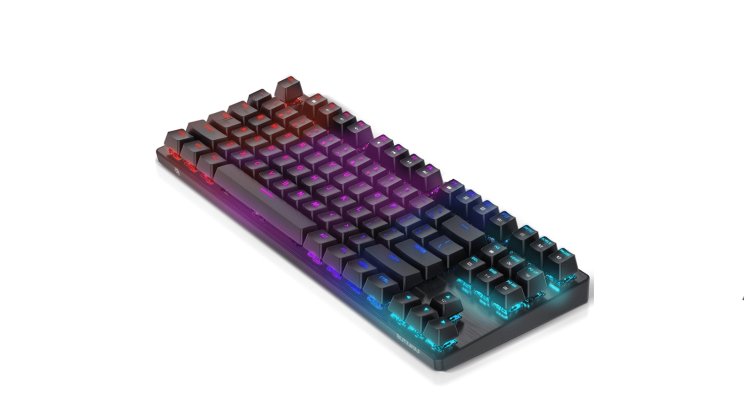 Keyboards with optical-mechanical switches are a relatively new phenomenon.

Furthermore, such solutions are only available in the upper price range. In the budget group, we typically find just classic mechanics; the popularity of less expensive optomechanics is essentially non-existent. Nonetheless, there are certain producers that can provide a lot for a modest price.

BlitzWolf, for example, recently debuted its latest keyboard (BW-KB2), which is an excellent example of low-cost, high-quality gaming hardware.

The device includes optical-mechanical switches and is reasonably priced, so many players looking for this type of keyboard who do not want to spend a few hundred dollars on competition solutions may be interested in the keyboard mentioned today.

What does the BlitzWolf BW-KB2 have to offer?

The BW-KB2 includes optical-mechanical switches. In terms of architecture, these switches are fairly similar to classic mechanics, but they differ in the part that initiates the switch. The mechanical switch employs a spring, but actuation is determined by a metal device that, when clicked, shuts the circuit.

35 g of force is required for activation.

They feature a significantly smaller spring on board and an activation point of only 1 mm, therefore they appear to be suitable for use in computer games.

Manufacturers frequently concentrate on just one component - either the quality of the switches or the overall construction.

In the case of the BlitzWolf BW-KB2, it is excellent in terms of specifications, craftsmanship, and overall appearance.

Because the keyboard is in TKL format, it lacks a portion with a numeric block.

There are 87 switches on board, each having a well-profiled and pleasant-to-touch ABS Double Shot cap.

Furthermore, they appear to be long-lasting, and the additional layer should keep the overlays from abrading.

The ergonomic form of the BlitzWolf BW-KB2 allows for a natural hand position - the first row with a space is a few millimeters lower than the Esc button and the function keys area (F1-F12).

The manufacturer has not overlooked the possibility of additional tilt adjustment when the legs contain extra tires. The BW-KB2 includes up to six non-slip rubber bands to ensure a firm hold - the gadget stands very stiffly on the desk, in one spot.

The bottom panel also features specific cable channels (detachable) that allow you to choose which side the cable comes out of.

The top panel under the covers is brushed aluminum, while the housing is constructed of plastic, resulting in a consistent and robust structure.

In terms of appearance, it is rather normal. The overlays use a standard font, and some buttons have functions that are enabled by using the Fn key. The whole arrangement looks nice on the desk, complimenting the gaming stand wonderfully.

The official website plainly states that the BlitzWolf BW-KB2 keyboard supports proprietary software, which would make managing the backlight or macros much easier, however, there is only a user manual for download in the "Drivers & Download" section, nothing else.

The manufacturer has configured his equipment in such a way that when you press a function button (Fn), all the buttons that work in tandem with it light up in white. This is a small feature that proves to be really valuable, especially for a novice user.

The lighting is controlled by the function button, and the majority of modes are hidden behind the Fn + Ins and Fn + Del combinations. There are other shortcuts Fn + Home, which adjusts the orientation of the effects, and Fn + PrtSc / ScrLk / Pause, which has lighting effect presets, including the most popular rainbow.

You will need to sit for 10-15 minutes to learn how the lighting control in BlitzWolf BW-KB2 works.

The keyboard's qualities include quality of construction, cable channel (which may be unplugged - however it is not a wireless Bluetooth device), look, and a comprehensive RGB backlight. Like most electronic devices, the BW-KB2 has some flaws, such as a lack of software, excessively high feet, and audible springs in some switches.

The software should be there, but it isn't

The feet provide a too high angle of inclination