The Octo Roma Carillon Tourbillon features a three-hammer sound combined with a tourbillon regulator - a skillful Italian interpretation of the Swiss watchmaking experience that comes to life in its innovative materials and bold design. Limited edition of 15 pieces 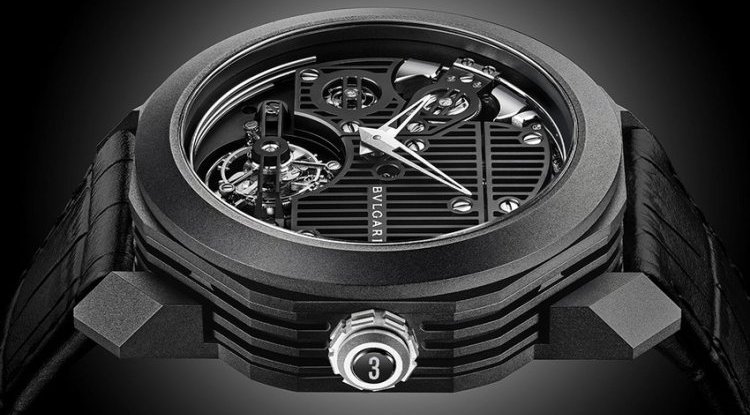 The brand new BVL428 hand-wound caliber is 8.35mm thick and comprises a total of 432 components.

Available in an ultra-limited edition of 15 pieces, each watch is individually engraved with a number from 1 to 15 on the crown to indicate its uniqueness.

Ensuring an acoustic performance to an object which by its nature is not a musical instrument represents one of the most compelling challenges in watchmaking. Because giving shape to the sound in the right tone, in the exact intensity, and following the correct melody ideally means composing a mechanical puzzle of unthinkable complexity. In which every single aspect plays its part, from the metal of the case to the curvature and subtlety of the gongs to the width of the soundbox, in this case, occupied in its entirety by the components of the movement. A recognized skill of the Bulgari House that is shown in the Octo Roma Carillon Tourbillon (in 15 units), with a 44 mm case in black Dle titanium that is also recognizable to the ear thanks to a manually wound movement with a three-hammer minute repeater function with a Westminster bell.