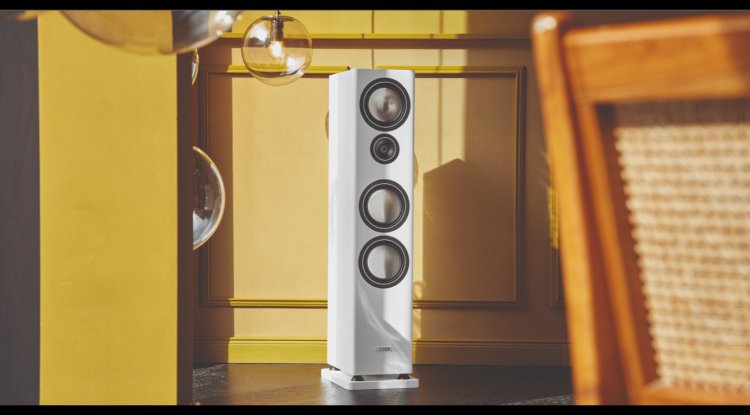 Countryside and City Clashing - Canton, Germany's market leader, is headquartered in the Taunus mountains and has been improving and increasing its speaker ranges at regular intervals for years. They now propose an entirely new product line, though.

The Townus 90, is the series, flagship model.

The name alone heralds the beginning of a new age - the creative play on words combining the calm Taunus area and the wild town can be seen as a success in more ways than one: Instead of the formerly relatively sober product line name conventions, a nice pinch of spice has been added here. One that is understood by everyone on the planet. It is also eye-catching because of the wordplay, and it immediately appeals to a large clientele. The target audience will not be too bothered by the pair price of 2600 dollars because both the equipment and workmanship are superb.

The ingredients for the drivers are typically found in speakers priced in the upper four and five digits: ceramic, titanium, and aluminum-manganese are the important phrases. The dome tweeter is thus built of a very light and rigid aluminum oxide ceramic alloy, with its front plate designed in such a way that its radiation harmonizes with the midrange system as accurately as possible.

The midrange driver, on the other hand, is made of titanium and aluminum. Canton anticipates that this will give a superb blend of rigidity and strong internal damping in its operating range, with no resonances. The developers focus on dynamics and compression-free functioning here as well, which is aided by the folded "Wave" surround.

A crossover equipped with high-quality components handles the allocation of frequency ranges to individual drivers. It is also in charge of the radiation properties, the timing of the sound production, and clean impulse response. The fact that a Canton's frequency response reaches far down and remains fairly linear without implying poor efficiency makes it appealing to a wide spectrum of clients.

Even at low volumes, every Canton speaker sounds strong. However, its true power only becomes apparent when you give them what they want - in other words, turn the volume up to twelve o'clock. It is scarcely remarkable, then, that distortions have been decreased across all genuine scenarios in the meantime.

The quality of workmanship, as well as the inside and outside of the cabinet, is also exceptional for the price range: an interior stiffened and braced multiple times at neuralgic points, damping where needed – for example, the crossover, which rests on a cork pad – and a generously rounded exterior to avoid sound refraction, which could distort the sound. Add to that the attaching screws for the chassis and panels, which are not visible and are not merely screwed into the housing, but are firmly secured through drive-in nuts.

The new, highly durable, and useful bi-wiring terminal with fine threads fits wonderfully into the image – though we doubt many owners will ever use it.

We can't forget to note that the lid is now rounded and magnetically adheres. The bass port is placed at the bottom of the speaker and radiates a certain distance onto the accompanying base plate, which is isolated from the cabinet by damping feet. What we are convinced of is that many people will use the speakers' sound once they have heard them. Canton has created a cocktail of the best quality and palatability - at a "Happy Hour" price – that will leave no trace of a hangover the next morning, even after an intensive listening session.

Do you happen to be familiar with the name Hans Zimmer?

So far, he is regarded as THE film composer of the twenty-first century. He has also recently provided musical absolution for the current Bond film "No Time To Die." The soundtrack, like the film, is opulent and a great mirror of what is happening on the screen. Quiet and loud in continual alternation, soft strings against a massive orchestra, caught with astounding dynamics - the Townus comfortably takes this task, appreciating an amplifier that maintains the same poise when the fortissimo approaches.

To summarize, the "Cantonists" behind this speaker have accomplished an amazing achievement; one that, even at higher price points, normally falls flat on its face when attempted. On the one hand, delivering practically exceptional neutrality, mixed with the capacity to make rock music, with its frequently substandard sound quality, rock thrillingly. To captivate the audience, to engage and animate them to those embarrassing attempts at dances and sing-alongs that, even in our long-gone wild years, usually resulted in pity stares from passersby.

You can only bow politely and acknowledge that massive orchestras or choruses, as in Verdi's "Chorus of the Hebrew Slaves" from "Nabucco," would be required to arouse the urgent yearning for "more."

The guys from "Townus" have once again accomplished a significant achievement!