Chieftronic M2: You don't need that much glass? 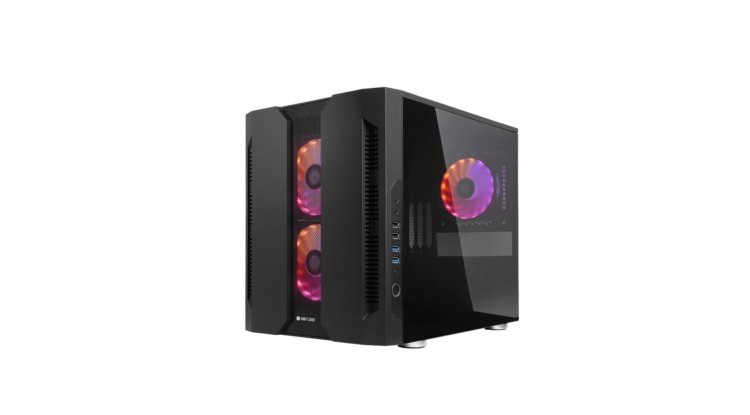 The most significant innovation can be observed during the unpacking process. The 350 x 400 x 270 mm housing, unlike its predecessor, includes a lattice front panel, which is far more efficient than the previous all-plastic option for ventilation the fans positioned behind it. This update also means that the ARGB LED strip running along the front panel has been removed from the housing, leaving only the three factory-installed air vents illuminated. The grille also includes the manufacturer's emblem and a ventilation grille that spans virtually the full width of the front panel.

Because we can only see sheets of tempered glass on both sides, the weight of the house has barely changed (it has been lowered from 7.5 to 7.47 kg) (the lower third of which has been completely darkened to cover the lower chamber of the two-story house). Since it is no longer comprised of a translucent substance, it has been replaced by a plastic cover with a snap-on ventilation grille in the center, beneath which two fans or a radiator up to 240 mm long can be installed.

The back fan and two pipe apertures for water-cooled systems open the line at the top, followed by the cut-out for the motherboard connectors and the four PCIe expansion card slots at the bottom, and an SSD behind it. There is a ventilating grille visible.

There are extra vents at the bottom of the case between the four replaceable feet with non-slip inserts, the smaller ones for the hard drive cage and the larger one for keeping the power cool, and both are equipped with an easily removable dust filter.

Look for the front panel, which is located on the right side of the housing, in front of the glass panel. Two USB 3.0 ports, two USB 2.0 ports, and two jacks are located above the power and reset buttons. A USB Type-C port would have been ideal here.

After removing the side panels attached to the rear with screws that may be removed manually, as well as the flip-off roof panel and front panel, we are faced with an easily accessible interior from all sides, separated into a lower and upper chamber with a horizontally oriented base tray.

There is, logically, room for the motherboard, and some spacers are already pre-wound on the Mini-ITX or microATX format part of the plate with the mounting window. Several cable ducts help with this, but there is also some space between one of the tray support pillars and the front panel where you can route some cables if needed, taking care to secure them so that the front panel fans are not damaged. Of course, the top section also houses motherboard-mounted components, up to a processor cooler height of 200 millimeters and a VGA length of 340 millimeters.

The dual-compartment hard drive bay is in charge of maintaining the motherboard tray in place. You may screw two 2.5-inch containers into the drawers, and if you put two 3.5-inch HDDs here, you won't need to screw them.

There is another frame in the lower chamber with space for two more 2.5-inch plates, which can also be removed if you do not want to use it or simply to make the installation of the power supply with a maximum length of 160 mm easier.

Because it is a microATX housing, we did not begin assembling the computer with our ATX motherboard ATX, but instead immediately mounted the ASRock Fatal1ty X99M Killer used for temperature tests in the housing, on which the Noctua NH-D15 sat, increasing the dimensions. With a GeForce GTX Titan graphics card from NVIDIA.

The installation of the most critical components was not too difficult, and because the motherboard tray was horizontal, we were able to work comfortably inside the house. We also completed the screwing and wiring of the connectors at the top in a matter of seconds, allowing us to easily reach all sides of the motherboard.

Even with the power cables in place, the space intended for data storage is easily accessible, and fortunately, even the wires and the ARGB controller have plenty of space in the lower chamber, so even a rookie machine builder will have no trouble locating the cables. Furthermore, because this portion of the glass side panels has been darkened, as long as we are not troubled by the awareness that there is a mess in the invisible locations, no special effort is required to organize the cables; everything will have enough room.

It deserves a special red dot because both drive frames feature vibration-absorbing rubber inserts so that operating the HDDs does not resound the entire chassis, except when installing a 2.5-inch hard drive in the larger drawers, where the screws must be wound from below.

Chieftronic has successfully rectified one of the prior model's most major problems, and it has improved the airflow of the housing so much that the M2 still looks extremely beautiful in our opinion, possibly even better by replacing the solid plastic front panel with a grille.

Cooling has also been increased with the addition of a single rear-mounted unit to the M1's single rear-mounted fan, which substantially aids in keeping component temperatures down. However, the system can operate at relatively low noise levels, making the M2 a pleasant companion not just for the eyes but also for hearing in daily life.

See what LeBron James looks like in the new trailer for "Space Jam 2"!

A new update for Returnal has arrived that introduces Photo Mode and S...

Desktop Instagram finally gets the option to add new photos and video...